Sorry for the delay in posting pics :shame:, but here is my red patent Peyton, which is one of the bags I bought for PCE. It was a last minute decision based on photos I saw of TRACEYBS' beautiful patent Peytons! Originally I thought the color was supposed to be very dark, but when I saw hers, I knew it was the right shade for me!!

For a RL comparison, this color is actually VERY close to the crimson Zoe color. In fact, DH and I were comparing the Zoe wristlets and wallets, and we both agree they would work well with the Peyton. Of course there's the little issue of buckles vs. turnlocks...but oh well! If anything, the crimson Zoe color is just a tad lighter and brighter, but it's not that far of a stretch! The patent is a crinkle patent for both bags.

Here are a couple of pics, and as you can imagine, it's hard to get the color just right. I'll try again later, but these are fairly representative on my monitors here. The lining is the same as the other Peytons..it's the older Legacy stripe lining.

This bag is definitely a conversation starter!! I have been attacked in most Coach and dept stores, and most SAs have told me they like this color better than any leather ones, including the atlantic color!! I actually don't know how I personally feel about that just because I'm not a huge patent fan, but I have to admit that red patent on a simpler style bag like this is just STUNNING!! It's hard for me to pick which I like better!!

Oh, and for those of you who think it looks like a suitcase, the bag actually slouches quite a bit on (more so on me than just hanging), but does retain its overall structure. I do keep some packing at the bottom to help with this. Actually, the patent seems to slouch much more than my other leather ones do, but of course it is a larger style bag and is not for those who don't like larger bags. The best thing about this one IMO is that it's SOOO nice to just wipe it off!! I used it during Hanna, and it was such a relief not to worry about it getting wet!! An expensive bag that's hard to ruin...hey, I can deal with that!!!

in a happy place!

WOW! Now that is absolutely gorgeous

WOW Baglady, I want one! LOL, that is an absolutely GORGEOUS bag!... does that script coach hangtag come w/it? Geez, why does there have to be so many gorgeous bags... I can't take it! LOL...
P

Sleep With Your Bag?

Oh, it's beautiful!!! Here's the drilldown 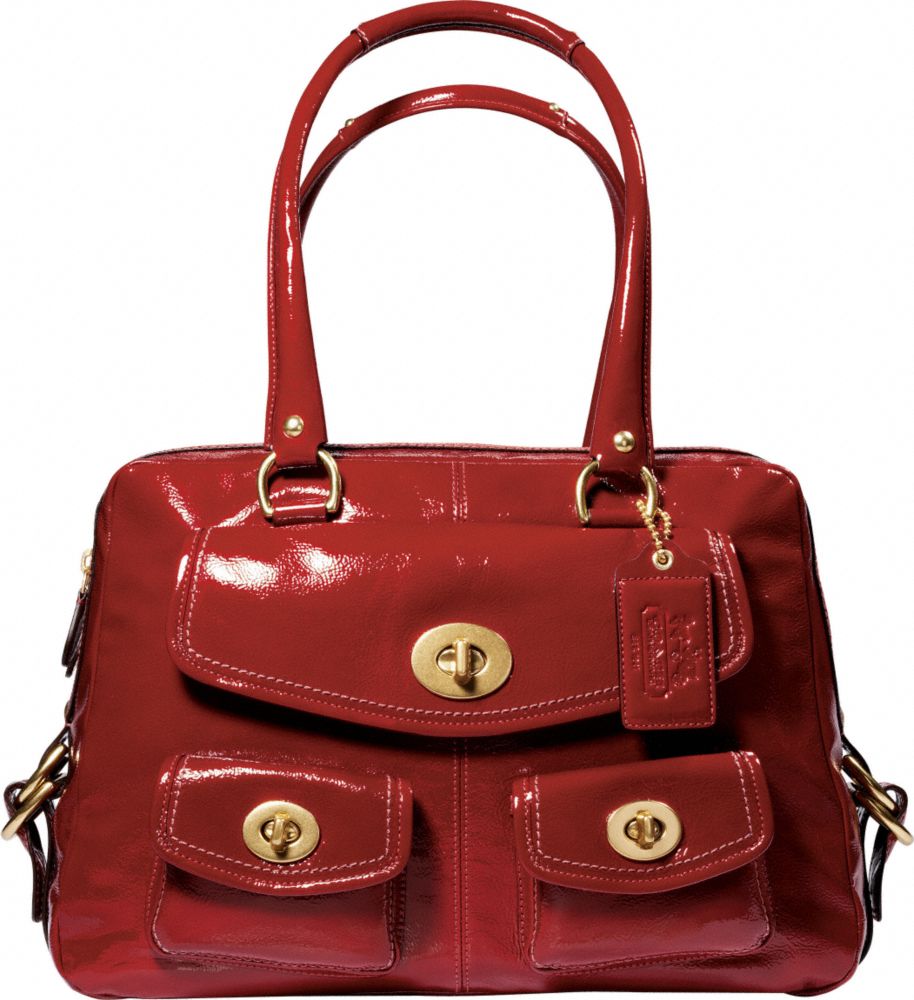 Wow that is gorgeous. It is a big difference between the drilldown and the shine that is actually shown in the photograph!

CoachGirl12 said:
WOW Baglady, I want one! LOL, that is an absolutely GORGEOUS bag!... does that script coach hangtag come w/it? Geez, why does there have to be so many gorgeous bags... I can't take it! LOL...
Click to expand...


No, I totally copied Coachgrl's idea of using the Coach script tag from my Legacy Thompson bags (these come standard with that line, except for the floral vachetta bags).

IDK about the fuchsia, but when I last checked it was down to way under 100...something like 30 or so. However, I noticed at least with atlantic and some of the other colors, they added more stock later on. So they might have added it for the fuchsia too since then.

Sleep With Your Bag?

It's not available in fuchsia on the Coach website... I still haven't taken the tags off of her and am thinking (GASP!) of baying her.

jen6292 said:
Wow that is gorgeous. It is a big difference between the drilldown and the shine that is actually shown in the photograph!
Click to expand...


Yeah, that's true. I think the color is correct, but they usually just photoshop the stock photos. The patent is a crinkle patent very similar to and shiny like the Zoe patent and purple Francine...so it has a heavier coating and sheen than some of the patent bags.

kristinmcd said:
It's not available in fuchsia on the Coach website... I still haven't taken the tags off of her and am thinking (GASP!) of baying her.
Click to expand...

If you haven't taken the tags off, you could just return it unless you think you can make a profit. I guess that's possible if you got it for PCE, although I know another one (gunmetal) went off without selling. They may still have some at JAX or through the boutique even if it's off the website.

Actually one was returned to the Hershey PA outlet, but a SA bought it!

oh! that is very stylish! i wasnt that fond of peytons but the red patent makes it look much better IMHO.

That is really gorgeous. I think I hd just convinced myself I didn't really need it and you went ahead and posted those pics!

wow! it's almost exactly the same shade as zoe, which is a very luscious red!

and your pics look much nicer than the drill down!