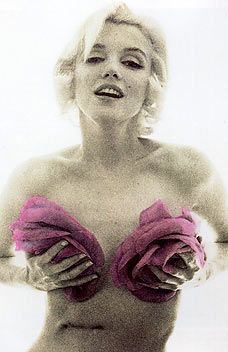 Racy: The vidoe was made before Marilyn Monroe became a filmstar and known for her risque photo shoots

Siren: The film first came to the attention of the FBI in the mid-1960s

A sex film featuring Hollywood screen icon Marilyn Monroe has been sold for £750,000.
The grainy black and white film was shot in the 1950s and shows the blonde actress performing a sex act on an unidentified male.
A New York-based businessman paid the six-figure sum for the tape which is said to be a copy of the original film still held by the FBI.
According to memorabilia expert Keya Morgan, who brokered the sale, the original film is still held in the evidence vaults at the FBI headquarters in Washington DC.
Monroe was secretly investigated by the FBI over her affair with President John F Kennedy and her links to mafia mobsters.
The film first came to the attention of the FBI in the mid-1960s.
The then FBI-director J.Edgar Hoover ordered agents to try, without success, to prove that Monroe's sex partner was either John F.Kennedy or Robert F.Kennedy, Morgan told the New York Post newspaper. Morgan said he heard about the illicit copy while researching the life of Monroe, who died aged 36 of a drug overdose in 1962, for a TV documentary.
A retired FBI agent tipped him off about the film and put him in contact with the son of an informant who had told the FBI of the film - but had kept a copy for himself.
After the informant died, ownership of the copy went to his son.
The 16mm film, which lasts for 15 minutes, had been kept in a bank vault for over 40 years.
Morgan said: "You see instantly that it's Marilyn Monroe - she has the famous mole.
"She's smiling, she's very charming, she's very radiant, but she's known for being radiant."
Morgan said Monroe and the man involved knew they were being filmed, and that it had been shot before she became a star.
Monroe is remembered for films such as Gentleman Prefer Blondes and Some Like it Hot.
The film buyer and seller have remained anonymous. But Morgan said the buyer had no plans to market the tape. "He said he's just going to lock it up," he added.
"He said, 'I'm not going to make a Paris Hilton out of her. I'm not going to sell it, out of respect'." Declassified FBI documents from the 1960s refer to a "French-type" film starring the late actress.
They state the informant "exhibited to agents a motion picture which depicted deceased actress Marilyn Monroe committing a perverted act upon a unknown male".
According to the documents, Monroe's former husband, baseball star Joseph DiMaggio, had tried to buy the tape to ensure it was never shown in public. He had been turned down.

Wow. Interesting. Would I sound nasty if I said I wanted to see it? LMAO.

What is that big slit in the first picture on her tummy?!

im sure by today's standards its PG

i want to see it too, veelyn. :ninja:

oh okay! when i saw 150,000 I thought with all the Marilyn fans surely it would go for more than that!

Wonder who the buyer is??

I really wanna see that!!

They say it's a secret buyer and he will never release it (the tape).

Joe D'M wanted to buy it for $25K, but they said they government would never sell it to him.

is playing catch up

Veelyn said:
Wow. Interesting. Would I sound nasty if I said I wanted to see it? LMAO.

What is that big slit in the first picture on her tummy?!
Click to expand...

o yea, good catch. maybe she had an appendectomy

If you respect MM so much...how about destroying the tape...why keep it unreleased?

I love her, sex tape or not!

DeeDeeDelovely said:
If you respect MM so much...how about destroying the tape...why keep it unreleased?
Click to expand...

I would hope that is what he would do...it would make sense, especially if he is said not to release it.
You must log in or register to reply here.
Share:
Reddit Pinterest Tumblr WhatsApp Email Link
Register on TPF! This sidebar then disappears and there are less ads!
Sign Up
Top Bottom