Mariah Carey, Is In Bloody England Causing Havoc With Her Diva Demands

Uber-diva: Demands include renting all the penthouses in her hotel for the ultimate in privacy

The diva has landed - this week Mariah Carey arrived in the UK to promote her new album.


She has the reputation for being one of the most demanding A-listers ever.
She herself admits: "I guess I am a diva in many ways. I can be difficult and a little bit rigid about what I want."
But then, amazingly, she says: "I don't think I'm demanding enough."
But, as David Thomas reveals, it's hard to imagine just how much more demanding Mariah could possibly be.


 When signing autographs this week at Selfridges department store, Mariah demanded a £50,000 antique table, covered with silk cloth, to scribble upon, flown in from New York. She sat on a £1,000 throne and was surrounded by roses and butterflies.

 Having stayed out until 3am at celebrity restaurant San Lorenzo, in Knightsbridge, Mariah cancelled an interview on London's Capital Radio Breakfast Show because "she's not a morning person".

She then rescheduled a BBC Radio 1 interview because there were problems getting her four-car convoy to the studio from Claridge's hotel, less than half a mile away.

 She insisted on having a £10,000 gym installed next to her penthouse suite at Claridge's. It was also rumoured she was bringing 100 pairs of shoes with her on the trip. She booked every penthouse suite in the hotel to ensure her absolute privacy and comfort. She has a 15-strong entourage with her, including bodyguards, stylists, hairdressers, publicists and managers 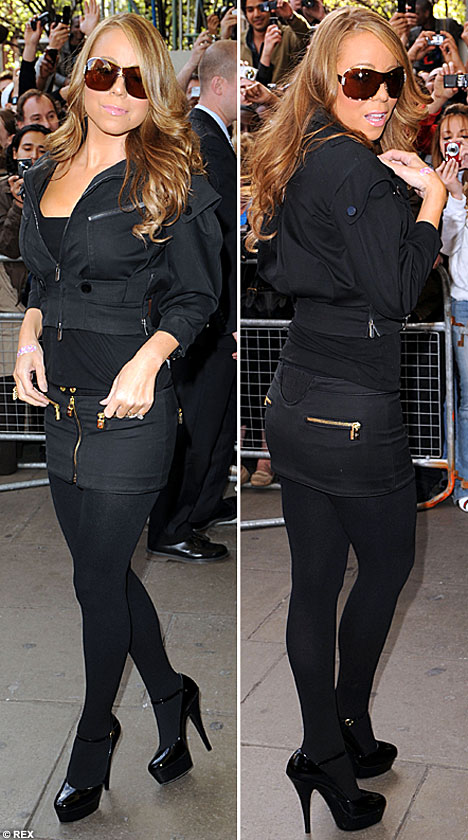  Perhaps Mariah's single greatest moment of diva madness came when she checked into London's Baglioni Hotel in 2005.
At 2am, a team of her minions arrived to check that everything was ready for their mistress's arrival. She, meanwhile, was driven around in her limo, until the hotel had rolled out a red carpet, lined with white candles, for her to make her entrance.
The hotel management was happy to oblige. Mariah was renting 15 rooms at a cost of £20,000 a night - small change to Mariah, who's worth an estimated £125 million.
 When accepting her role in the upcoming film Tennessee, an independent, low-budget production, Mariah was told budgetary constraints meant she would have to travel to the location on an economy-class air ticket, rather than her usual first class or private jet.
Mariah agreed ... then bought every single economy seat on her flight, and travelled alone in the cabin.
 Mariah has a steamy time in the bedroom ... but it's got nothing to do with her sex-life. As part of her obsessive campaign to preserve her all-important vocal cords, she insists on maintaining rainforest levels of humidity. "I'll have 20 humidifiers around the bed," Mariah reveals. "Basically, it's like sleeping in a steam room. The bed is all towelling cloth, the ceiling is sloped so the water can't fall on my head, and it drips down to my side. My TV is behind glass 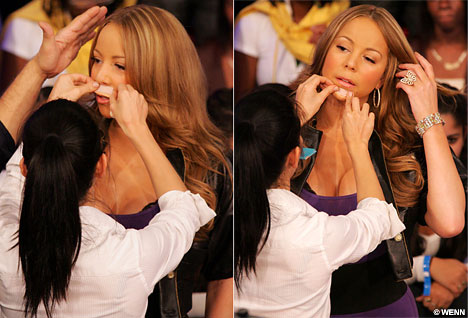 Mariah Carey gets an assistant to pat down her lip and chin seconds before appearing on a U.S. TV show in October

&#8226; She insists on wearing high heels at all times, and has even been filmed in her stilettos while using her home-gym equipment. "I can't wear flat shoes," she sighs. "My feet repel them."
&#8226; Mariah turned 38 on March 27 this year, but she refuses to acknowledge her birthdays or advancing age. "Honestly, I don't even have birthdays. I call them anniversaries. It really is about how young you feel," she claims.
"I'm eternally 12. And that 12-year-old inside me is an eternal optimist."
&#8226; Mariah used to insist on flying her Jack Russell terrier, Jack, in a first class seat, until he grew too big. Now he either goes by private jet - "Jack lives on a private jet," twitters Mariah - or by chauffeur-driven Mercedes. She has been known to have him driven the full 2,461 miles between her homes in Los Angeles and New York.

&#8226; In Paris last week, she arrived almost three hours late for a press conference, by which time most of the media had given up and left. Mariah then stayed for less than 30 minutes.
Indeed, her tardiness is legendary. She once arrived 90 minutes late for the Capital Radio awards because she had broken a fingernail.
At the Save The Music benefit show last September, organisers built an hour's delay into their schedule specifically to allow for Mariah's lax timekeeping. &#8226; Mariah refuses to speak to anyone for two days before a concert, communicating only through notes. She recently remarked that she wanted a voice machine like Stephen Hawking's to save herself the trouble of writing.

'Prepared for a visit to Radio One yesterday


&#8226; She only consumes soft drinks through a straw and insists on these being available whenever she makes a personal appearance. She even has people to hold her drink as she sips.
&#8226; Mariah recently slimmed down from a well-rounded size 14 to a skinny 6. She insisted on flying her personal fitness trainer Patricia to New York for their exercise sessions.
"Patricia lives in St Barts, poor girl," Mariah explained. "People say to me: 'Only you would fly someone from St Barts in the Caribbean to New York to work out.'"
&#8226; When married to Tommy Mottola, former boss of Sony records, she lived in a 12-bedroom mansion with its own ballroom, firing range, helipad and two swimming pools.

&#8226; While making the video for her recent single Shake It Off, Mariah insisted on being carried around the set because her teetering shoes had left her tender tootsies in pain. "I was in agony," she huffed afterwards. "My high heels had left my feet bleeding. Laugh all you want, my feet hurt."
&#8226; Mariah owns a 12,000 square-foot, three-storey apartment in New York's trendy Tribeca district. She proudly insists: "If anyone ever buys this place, they had better be a diva or they can't live here."
There is a Roman-style chaise longue in the dark-green marble kitchen, "because I like to recline when I eat". Mariah's bathroom has a gold ceiling and pink and beige satin drapes. Steps lead up to the bath.
&#8226; Mariah has four giant, walk-in closets, including one just for her lingerie and another for her shoes. The biggest of all, which contains four mobile wardrobes, is big enough to be used as a fitting-room for Mariah and her team of stylists. "The closets are a big part of my life. It sounds obsessive - but they are pretty fabulous," she swoons.

&#8226; Mariah has not used public transport for at least 15 years. "I hate the bus!" she recently shrieked. "I've already been on the bus I don't need to go back on the bus." &#8226; At a concert in Karlsruhe, Germany, Mariah suffered a costume catastrophe that exposed her magnificent (and, she insists, all-natural) breasts to the crowd. She had the lights doused and yelled: "Someone bring me a jacket or the show's off," before fleeing the darkened stage. The concert resumed after modesty had been restored.
http://www.dailymail.co.uk/pages/dmstandard/article.html?in_article_id=431610∈_page_id=1766

And I'd also like to mention that I don't find this shocking..assuming it is true....

I respect MC for being a successful recording artist, but her style (why is everything miniature? It makes her look even bigger) and her over-the-top ways are too much.

And I'd also like to mention that I don't find this shocking..assuming it is true.

And I'd also like to mention that I don't find this shocking..assuming it is true.


ITA! Prada I don't doubt for a second that is not true

I heard her on the radio a few days ago and she was talking about a skirt she wore. She said it was the smallest size they make because she had lost weight. She said it was a size TWO! Yea right! She's a lyin' DIVA thats for sure! LOL. She isnt a size 2!

After all of this.. I still love her !

I can't help but love her. I dunno why!

I just got dizzy reading all of that.

I think shes too high maintainace & if one day she lost of that $, wonder how she'll react?

The woman just likes to waste no money for no reason whatsoever- with those kind of expenses she basically needs to keep putting out successful albums or she's going to be the next MC Hammer.

I absolutely LOVE Mariah Carey, but her attitude(from her "Diva" ways, all the way to her Bi-Racial confusion) has always bothered me a bit.

With all these money and army of stylists she still manage to dress like a hooker! Why is that? Her demands sound rather naive, same way like P. Diddy always has his ketchup with him.

Funny how most of her diva demands have the objective of making her and each and every one of her public outings look tacky and straight out of a Barbie book.
She would do better hiring a stylist than a drink holder.

PS ( I don't get how the end of the article makes any sense: even I don't use the bus if I can't avoid it, why would a celebrity ever use public transport? Hardly a "diva" fit, the last one. They could have closed it better