(source: style.com)
masters of disguise
Jacobs and co. Compete for Most Outrageous Costume at His Holiday Bash

"Of course, I'm expecting misbehavior," said Marc Jacobs at the start of his Venice Carnival-themed holiday party at Gotham Hall on Wednesday. "But," he added, pointing to his pigeon suit, "I'm not sure how I'll do wearing this." The designer wasn't the only one with wardrobe restrictions. "It took three gay men to get me dressed tonight," said Dr. Lisa Airan, alluding to the corset of her turquoise ball gown. "I can barely move but I can't sit down either." Airan spent the evening standing on the sidelines with Rachel Roy, Damon Dash, and her pal and co-dresser Gilles Mendel, who sported a white Phantom of the Opera-inspired half-mask. "Everybody else has those beak nose things on," said Mendel. "I'm trying to hide my long nose."

Dolled up with face paint, platinum wigs, and corsets, the rest of the crowd took their cue from the writhing dance performersmany of whom sported little more than breast paint and shiny, skimpy briefsand spent all night on the dance floor. As they finished the final twirls of a classic waltz, white feathers rained down from the ceiling in a sight that Airan called "heavenly." The word didn't quite fit the rest of the evening, however. "Decadence is more like it," declared Robert Duffy. "All this and I saw something naughty happen between a girl and a boy from two of our stores in the restrooms."

Marc Jacobs and Robert Duffy at their "Carnival in Venice" holiday party at Gotham Hall.

(source: style.com)
Gabi and Ange from Threeasfour, with Marc Jacobs and Marie Franke.

(source: style.com)
Partygoers who won an award for their costumes. 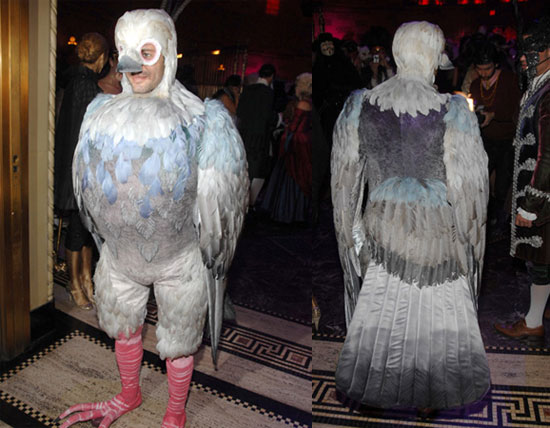