WARNING: Long story. And not a good one. 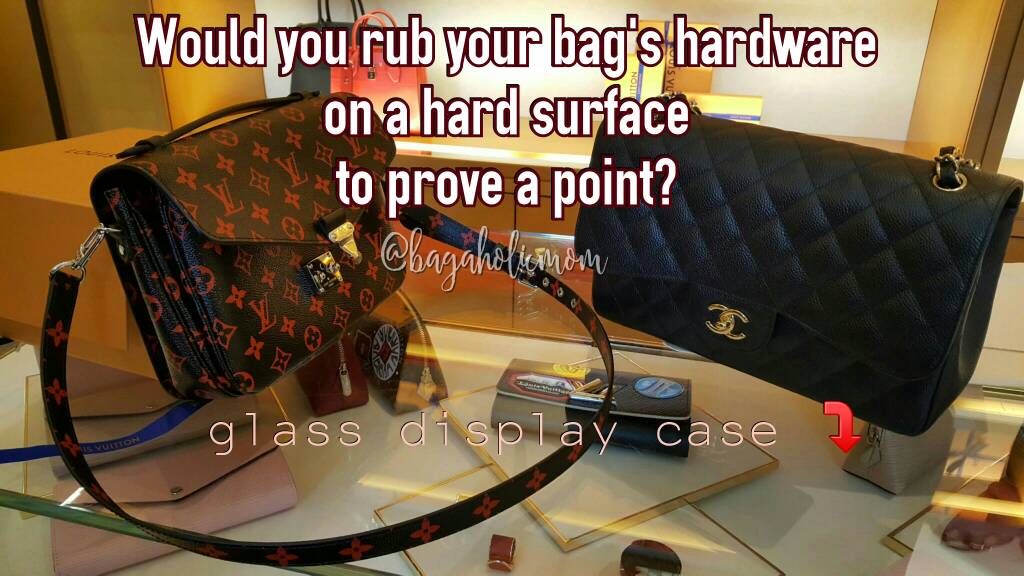 The last 24 hours of getting my Christmas present was not all hearts and flowers.

The bag my husband chose and would have wanted to surprise me with was one that I had had on my wishlist for over three years. It kept getting sidelined over the years due to interest in other bags. That being said, while he considered the Pochette Mètis and he likes the infrarouge over the reverse monogram, his choice was the Alma BB in magenta vernis leather.

Last night, we picked it up from the LV boutique in Bloomingdale's in SF. He was excited for me and kept teasing me because up until I saw the bag, I had had no idea what it was. But he also asked me to accompany him inside to inspect the bag for flaws.

And flaws there were! Each of the four feet of the Alma BB had tiny tarnishings/discolorations in the middle - the kind one gets overtime due to wear and tear of putting the bag down and unintentionally rubbing it onto hard surfaces. Suffice to say, we were both disappointed, my Christmas surprise, ruined.

The next day, which was this morning, we rushed back to the city to go to the Union Square branch as it had just one remaining Pochette Metis in the reverse mono. We were met by a female SA who referred me to my SA, Evan, who graciously laid out both the reverse mono and the infrarouge for comparison and then gave me perfume samples before leaving.

But what left me aghast was not Evan. It was that female SA. She asked why I was replacing the Alma BB when its color was hard to find in-store. I showed her the feet and to my shock, she explained what I already knew about the tarnishing and grabbed the bag and rubbed its feet, HARD, against the glass display case, to emphasize her point.

I still cringe at the memory... I mean, in my over half a decade of collecting high-end purses, it's the first time I saw someone deliberately and carelessly treat a bag that way. Other SAs would even carefully place a bag on its dustbag while being inspected. This woman, did not.

I sent two complaint emails to LV detailing this. This is unacceptable.

I don't understand what was her point in doing this? We're you able to get your bag replaced?

TaylorXavier said:
I don't understand what was her point in doing this? We're you able to get your bag replaced?
Click to expand...

She was trying to demonstrate how it is normal that the feet have tarnishing. I knew that already. I told her that I don't want it that way. For me, should these bags have flaws, those flaws should come from me and my own wear and tear and not when the bag is supposed to be brand new.

I exchanged the bag with a Pochette Metis, the first runner-up in my wishlist. There was no Alma BB of the exact color at any of the nearby LV boutiques.

Yikes what that SA did was totally unnecessary. You had every right to exchange your unused bag if you wanted to.

Congrats on your new PM! It's a beautiful bag!
Reactions: SakuraSakura and Precious84

TaylorXavier said:
Yikes what that SA did was totally unnecessary. You had every right to exchange your unused bag if you wanted to.

Congrats on your new PM! It's a beautiful bag!
Click to expand...

It was unnecessary, indeed. Thankfully, they did not give me a hard time exchanging my bag. It was just that episode earlier that had me cringing. The bag's already flawed... Why damage it any further ?!

I'm really curious as to who this SA was.
Reactions: SakuraSakura and Precious84

Alexis168 said:
I'm really curious as to who this SA was.
Click to expand...

I was tempted to call my SA to ask him what her name is but then I figured, with my two separate e-mail complaints, he'd be interviewed and asked who that female SA was who was with him. My complaint came detailed with the time and date of when it happened.

That's awful, I mean these are expensive bags and I'm guessing they are going to end up selling that Alma to someone else, so it ridiculous to purposely scrape the hardware like that.
Reactions: Aliluvlv and Precious84

I hope that SA won't sell it to someone else...
Reactions: Precious84

as much as i hope it wont get sold to the next unsuspecting buyer, my guess is that it will still get sold
Reactions: Mariapia and Precious84

Just a gal who loves purses, clocks and cats

This would be like someone selling china and then throwing it against the wall and saying "see china breaks!" when a customer brings a chip to their attention. She kind of reminds of the Soup Nazi from Steinfeld.
Reactions: Mariapia, Aliluvlv and Precious84

yy_bubu said:
as much as i hope it wont get sold to the next unsuspecting buyer, my guess is that it will still get sold
Click to expand...

That is what I think happened to me when it was delivered. Ugh. If only that specific color was not out of stock almost everywhere, I would not have ordered online. But then my last online purchase was perfect so this was disconcerting.

Sent from my SM-N920V using PurseForum mobile app
Last edited: Dec 12, 2016
You must log in or register to reply here.
Share:
Reddit Pinterest Tumblr WhatsApp Email Link
Register on TPF! This sidebar then disappears and there are less ads!
Sign Up
Top Bottom