Luxury brand engagement ring worth it

For those of you who got a luxury brand engagement ring (Cartier, Harry Winston, tiffany, etc) did you do so for the brand or did you find the quality level to be worth the premium?

I've read some jewellers that run their own store say diamonds in places like T are low quality. They get you with the brand.

I think you should go with what makes you happy. It's similar to the tug as to whether to go with better colour and clarity, or bigger. It's what matters to you most. Not so much in the UK but elsewhere lots of brands do trade-ups too no? (I don't know much about that).

I didn't believe that brands use lesser stones. Those brands have a lot of buying power., suppliers would never risk either the brand's reputation like that or their own. At the end of the day, most 2K + rings are certified, have been apprised stating quality of colour and clarity, as well as weight and cut so you should know what you're getting regards stone wherever you go.

If I'd wanted something contemporary and very specific and didn't see it at a major brand I might have gone to a jeweller who could have made me exactly what I'd wanted. If I'd seen it at a major House, I'd go for that. It helps to know what you'd like.
Reactions: akimoto, opensesame, limom and 1 other person

My husband had me get a stone much higher in quality than any Tiffany stone I looked at in my budget, for more than half off.

You probably will not get any more exceptional stone than you can buy elsewhere but you’re paying for very expensive advertising, marketing, elegant store overhead, design. You may get a recognizable design with your setting if that’s important but the stones are not somehow more special just because they are Tiffany or Graff, etc. Don’t assume that’s what you’re getting, look at the specs.
Reactions: lilpikachu, jennlt and Clairen4

We couldn’t care less about “designer” gems. When my husband knew he wanted to propose, he popped int a Tiffany’s store and asked about pricing on a 4 carat “nearly perfect” diamond. They showed him and he laughed his way out lol
He commissioned Victor Canera’s help and was given 2-3 options and landed on the one that's slightly over 4 carat, and truly damn near perfect!
I didn’t ever discuss what size I wanted, that was on my DH. But I do know the range that he paid would’ve gotten him considerably under 3 carat with not as ideal cut and quality.
Reactions: purrsiantea, 880, papertiger and 3 others

I’m torn with this one. My original engagement ring (which I still have and treasure) was chosen by DH and is not a designer branded one. I love it because of what it symbolises but looking at it ‘coldly’ the diamonds are not great quality and my taste has also changed over the years. I now favour three stone engagement rings or ones with halos.

As I don’t mind buying preowned DH ‘upgraded’ (don’t really like that word but it is used a lot on this forum) my ring to a Tiffany 1.04 ttcw diamond three stone ring in platinum for our recent wedding anniversary. I could have gone for a no brand ring with a much bigger size for the price, but the Tiffany ring is just perfect to me and yes, even though no one would know it is a Tiffany looking at my hand, I know and it makes me happy every time I look down at it

I had to have it resized from a 5 to a 7.5 and despite the fact it is a 14 year old ring Tiffany did it for free - the customer service was literally impeccable throughout the whole process and apart from coming back to me the correct size it also looked like new. I don’t know many non-designer brands who will stand by their merchandise like that and basically guarantee the ring for its entire lifetime regardless of ownership.

Just my opinion and I know there will be many who disagree. At the end of the day you have to choose what is right for YOU and not some anonymous person on this forum. Also, be aware of cultural influences - bigger is always better in countries like the US but in countries like the UK, where I live, it is extremely rare to see someone with a diamond of more than a carat.
Reactions: sneedonist, A bottle of Red, Chilipadi and 5 others

My Husband judges jewelry always from an investors point of view as well. He thought, in case we have to sell the ring at one point in time, be it in case of an upgrade or any other reason, a branded ring would keep its value much better than any no name alternative. I hope he was right, because he could have saved almost half the money by buying something unbranded. I was fine with his decision, I did not want a bigger diamond anyway.
Reactions: 880, papertiger and Onebagtoomany

I bought Tiffany because I have an affinity towards the brand and didn’t have a trusted jeweler. I love my ring and it was the only ring my husband liked. However, if you are open to other options then you will get more somewhere else.
Reactions: 880, akimoto, skyqueen and 2 others

Non branded! Why pay two, three or four times the amount purely for the name? There are websites where you can view any diamond they have from 360 degrees, choose the cut, colour, clarity and carat weight you want, then choose the semi mount of your dreams for so much cheaper. Obviously they also have ready to wear rings too.
I have an Effy emerald and diamond ring, but that’s purely because I used to work for a fine jewellery company and got my jewellery at cost plus 10%. I would never have paid the retail price for it.
Last edited: Aug 7, 2020
J

Jewellery and especially diamonds, are one of those items which are not worth buying designer in my opinion.
Reactions: Shelovesbling
O

I think if the setting design is distinct to the designer, then yes go designer. Otherwise, I would get better diamonds for the price.
Reactions: sneedonist, lilpikachu, 880 and 1 other person

I bought a Tiffany engagement ring (and later on a channel-set band) for the girl who is now my wife. At the time, Tiffany diamonds could be provided with both Tiffany and GIA certificates although I did not ask for a GIA one and Tiffany guaranteed that they their grading would meet or exceed GIA standards. This seems to be backed up by other parties with no relationship with Tiffany. See here, here and here.

When I was ring shopping – this was about 2010 – the fallout from the GIA bribery scandal of 2005 was still lingering. So whilst the GIA had taken swift action and dismissed the four employees involved, there was certainly damage to their reputation and it did influence my decision, though only slightly.

I wasn't so much looking at luxury brands as brands that had heritage: Mellerio dits Meller, Garrard, Hamilton & Inches, Cartier and Tiffany. One ring I really liked, was this one:

But what really made the choice simple in the end, was that she only had two preferences. She wanted a six-prong Tiffany setting and she did not like a cathedral setting. So that settled it. You could get a six-prong setting just about anywhere, but I knew deep down that it would not have sat well with me if I'd gotten a generic Tiffany setting. She had to have the original. I had to.

I was less than a year into my first job out of university/college, so settled on the best that I could afford on two months' salary at the time. The stone was small (0.32 carat), but it was everything else I could hope for – internally flawless D, graded excellent for cut, symmetry and polish, was a Type IIa (no florescence), no culet and a faceted finish on the girdle. (If you didn't know, faceted or polished is the way to go, don't get a bruted girdle.) 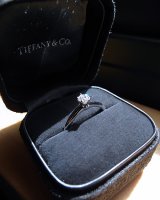 I remember the day I went to ask her dad for permission. He took one look at the ring and said yes.

So here we are, 10 years down the track. She still insists she would have said yes to any ring, but she's also told me that she's never had to think of an "upgrade" since she's not wanted for more. I think there's a certain satisfaction when it comes to owning a luxury product and it's a mindset. I'm the sort of guy that would rather have a small Ducati than a large Harley.
Reactions: theprettymiss, 880, akimoto and 7 others

My preference is for non branded diamonds.

If you want bang for buck, take your time and do the research - it will be worth it!

For a custom ER, I would go with Brian Gavin Diamonds, Whiteflash or Victor Canera.

My partner was willing to buy me a Tiffany ER but I said no. My ER and WB are from BGD and I love them so much!