Loose stitching - would you be bothered?

Khaleesicat said:
I'll have to contact them and ship it. I ordered it from them and live a long way away.

going to get in touch with them first thing tomorrow.
Click to expand...

Loose stitching is inevitable but you can prevent it from getting worse, so bring it in for repair.

deetee said:
Loose stitching is inevitable but you can prevent it from getting worse, so bring it in for repair.
Click to expand...

Yeah, I figure it's inevitable eventually. But I've only carried the bag under ten times.

JE2824 said:
Are you sure that is a loose stitch or where the stitch ends? I have had both. It is an easy fix if it is loose stitch, but since it is brand new I would take it back. All Neimans can do is ship it back to BG. I would bring it to BG directly or a Chanel boutique. Can you post some more pics? Maybe it isn't a loose stitch, but perhaps were the sticking ends
Click to expand...

I too have a loose stitch just hanging open, not an end that I can cut off. Were they able to fix it on-site that same day? :

If I bought this bag and had this stitch "sticking out" I would return it.

Does anyone have any experience having a loose stitch on the back pocket of a Chanel mini rectangle? I went to the boutique today to ask about repairing a single loose stitch on the bottom left corner of the back pocket, and was told it would take 11-13 weeks, and would cost $585. The bag is a little over a year old, but was given as a gift, and purchased at a department store rather than a stand-alone boutique. The SA acknowledged that the bag was from the 2015 season, but said that there was nothing they could do, as the cost is a fixed price. Does anyone have any experience with having stitches become loose?

WTF? No way. Talk to someone else. I was charged 85 for stitching on my reissue.
Reactions: LilMissCutie

I believe that this is the current price list for repair/refurbisment. No way it should cost that much! 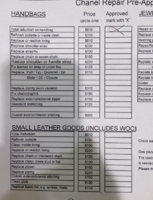 Reactions: KH8, Majka87, CatLovesChanel and 11 others

I bought a Fall 2014 bag from NM in California. The SA promised me that if I have ANY problems with my 225, that I should just go back to them and they would take care of it no matter what.

I actually just had this happen to me a few weeks ago. I popped a stitch on a purse I bought in 2008. I brought it to the Chanel store and they told me they would not be able to fix it locally because it would be hard to match the thread colour (its pink), especially since it was from 2008 and they probably didn't have the thread anymore. They said they would send it to Paris to be fixed, it would cost $75, and would be returned to me by December or January (at least 2-3 months).

I was very pleased with the price so I sent off my purse. The very next week they phoned and said my purse was ready! I guess they were able to fix it locally after all. I am out of the country right now so my mother picked it up for me, and she said they restitched the entire front flap and it was PERFECTLY done. They also only charged $25!

So $585 sounds extremely steep to me, but I guess it really depends on how bad it is. Here's a picture of my popped stitch before repair, for reference.

I have this same issue on my WOC, about half of one of the threads popped on the corner. I was able to trim it with super fine scissors for the OCD in me is annoyed whenever I can see a slight fray. I bought my WOC from Nordies and don't have a Chanel store in my city (closest is 80 miles away). What would you all suggest?

I would also call that uncalled for.
I have a Chanel from 15 odd years ago (my first Chanel) and it has a loose thread.
I already told my SA and my boutique (in europe) has absolutely no problem repairing a fault as such...just need to find time to take it in.

A few years ago I took my vintage mini into NYC store for repair to the leather on the chain strap where the stitching had come undone and they quoted me like $30, ended up being complimentary.
Reactions: victorialewis
L