Does anyone know the designer or name of the bag Liv Tyler is carrying in this picture?

I apologize in advance if this has been asked before. The bag looks familiar - the zipper pull on the front pocket looks a lot like something I recently looked at and I seem to remember that handle (Does Eva Longoria have this bag too?)

it's the b&d ingrid, on sale at bergdorf goodman 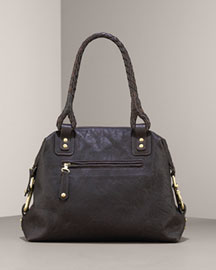 It is the Ingrid - and it comes in two sizes, the regular and the citi. Liv is carrying the larger size....don't know the dimensions, sorry! Hope this helps....we know that the photos posted with NM and Bergdorf are lousy, yes?
•••

Opps.... I should search the thread before posting my question about Liv's bag today. :shame:

I have been googling but couldn't find the citi style.