Lifetime has released the first teaser for its highly anticipated movie, "Aaliyah: The Princess of R&B."

The 16-second clip, which was posted on the networks Facebook page Friday, features Alexandra Shipp dancing while dressed in the late R&B star's signature look of crop top and baggy pants.

Shipp, 23, took over the role after Zendaya Coleman dropped out earlier this summer. The Disney Channel star said she left the project because she didnt feel morally okay about portraying Aaliyah since the singer's family didnt approve of the film.

Jomo Hankerson, Aaliyahs cousin and president of her label, Blackground Records, told the Daily News in June that they felt the star deserved a more high-profile vehicle with A-list actors (and) A-list talent that can breathe life into what we think is a phenomenal story.

"In my opinion, TV trumps motion picture," she said. "Lifetime will play the movie over and over. TV is the way to get your story told."

(AllHipHop News) Lifetime is set to premiere its Aaliyah Haughton biopic on November 15. The movies executive producer Wendy Williams revealed information about what parts of the late singers life will be covered in Aaliyah: The Princess of R&B.

You see little Aaliyah grow up. You see when she first gets her record deal from her uncle Barry Hankerson. You see when she first meets Missy and Timbaland, says Williams. Aaliyah took a chance on working with Missy and Timbaland, because her uncle Barry and the record label wanted her to continue with her second album  which is platinum  working with R. Kelly.

Aaliyahs romantic relationship with Kelly was a major scandal in the early part of the One In A Million performers career. The two entertainers were secretly married in 1994 when Aaliyah was only 15 and Kelly was in his late 20s. The marriage was eventually annulled. According to Wendy, the Aaliyah-R. Kelly situation will be heavily featured in the film.

As promised you will see how she meets R. Kelly, what her father and mothers reaction was to R. Kelly, when it ends with R. Kelly, how she moves on to Dame Dash, explains Wendy. But what you wont see if the plane crash. I just thought that was distasteful.

The film stars Alexandra Shipp as Aaliyah, Jackie Long as R. Kelly, Lyriq Bent as Barry Hankerson, and Elise Neal asGladys Knight. The Haughton family was not supportive of the movie being made.

Wow, I had no idea she was married to R. Kelly.

Yes? May I help you?

I can top that: I had no idea who she was.

I loved that One in a Million CD I played it out so much in college that it skips. Aaliyah was a great entertainer regardless of the R. Kelly situation/scandal. I never really knew that she was married to him or involved until hearing about it in the press years later.

This movie is so boring. Also, I can see where the fake bald cap starts for the R. Kelly actor 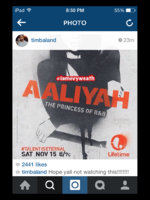 I'm with Timbo.. They should've left well enough alone. This girl is terrible, the fake r. Kelly is terrible, her brother looks like drake. I wish they would let her rest.

It was terrible overall and there was no ending?! No accuracy, bad acting, no actual songs. The Houghton family did not support it, then of course it is horrific.

Character portrayals was well off, casting was not right. :[ I dont even know anymore...

Sassys said:
This movie is so boring. Also, I can see where the fake bald cap starts for the R. Kelly actor

LOL, id like to see her play it off tomorrow on Hot Topics. Her social media pages have so much hate right now! wow