Let's give her a mini-welcome into the family! Reveal for "Which would you pick" thre

I wish I could link you the thread but alas I'm a tech dummy..[emoji33] Thank you so much to the ladies that have replied to my thread and gave me such wonderful yet sound input! [emoji122]&#127995;[emoji122]&#127995;[emoji122]&#127995;
I thought my mind was made up as I headed into the store..but of course, H gods like to throw a curve ball here n there to mix things up a bit!
I was initially offered BE k28, orange k28, and what I thought was blue paradise b25. (Turns out it was k25 all along [emoji16])
As I was rushing in the 25mph traffic into my local store, 30min before my ETA, I get a text from my lovely SA that another bag had freed up. Would I like to change my hold..
[emoji32][emoji33][emoji32][emoji33]
Quick contemplation/mental visualization of my collection, I logically declined the offer and stuck with my initial choice.
Tick tock tick tock..as the minutes count down, I felt a rush of panic that this traffic would never clear up and I wouldn't make it before the store closes.
•••

Oooh! Looking forward to hearing the rest of your story!

wow, what a turn of events!!! can't wait to find out the ending hahah~
Click to expand...

sonaale said:
Oooh! Looking forward to hearing the rest of your story!

I arrived into the store and it was chaos as usual. Perhaps more so since it was a Friday. I texted my SA after searching two floors and not seeing her. She found me amidst the crowd and I was first lead to the leather goods floor with all the rooms being occupied, we then headed up to home goods where it was near empty and suddenly deafeningly quiet.
My heart was thumping away at the anticipation, this is where the quietness made matters worse! Oh I hope I love it, if hearts could speak, that's what it'd be saying. Oops, was that my mind and not my heart speaking?! Well, heart and mind was working in tandem and I honestly couldn't differentiate at that moment.
••• 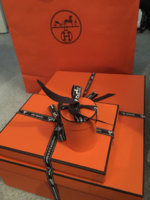 I was shown first what I'd asked to be held and here's a pic..blue paradise k25 with phw. 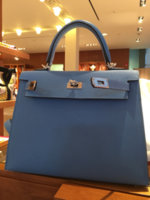 It was such a cutie...but then the thumping stopped. [emoji17] That's a nice blue I thought as I opened and closed the flaps, tried it with the straps, admired it in the mirror. Yes, nice blue, I reiterated silently once more.
•••

A lover of blues, yet, I didn't feel anything for this. Disappointed, but then I remembered the other offer, and surprisingly, the thumping resumed as I waited for my answer.
•••

Ms Macaroon came out in sealed plastic wrap and the moment it came to the light from its papery blanket of coziness, I was jumping up and down with glee and my eyes must've widened ten fold! My SA knew instantly this is the winner for me and that's that! Lol
No playing, modeling, contemplating necessary!
•••

crazyforbag said:
did you get BE??
Click to expand...

Nope, I didn't consider it Bc I already have it in b30 and both are ghw..couldn't even rationalize that! Lol
••• 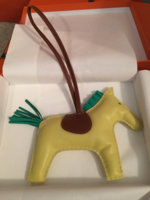 been waiting for lime forever but there was only mm and I still grabbed it with a quickness for my b30
Twilly..but which cw? 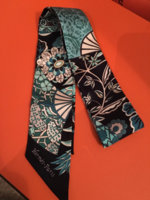