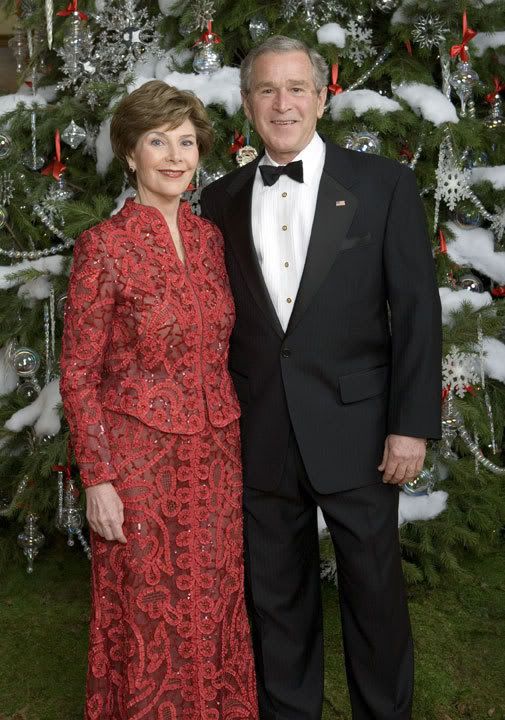 See this dress Laura Bush is wearing in this official White House Holiday photo? It&#8217;s by Oscar de la Renta and costs $8,500 dollars. You&#8217;d think if you were going to spend that much money on a haute couture dress and wear it to an official event, you would make sure it was an original, right? So nobody else would be wearing the same dress as the Queen of the Free World?
Well, it seems Mrs. Bush didn&#8217;t have someone do that for her and ended up wearing this dress not only for the official White House Holiday photo, but also to a celebrity studded party at the White House. Imagine her surprise when she discovered that three other women were wearing the exact same dress!


Letitia Baldridge, Jacqueline Kennedy&#8217;s Chief of Staff and White House social secretary says the gown was beautiful, but triple the trouble was quite the mess.​
&#8220;They all should have congratulated one another on their good taste and the fact that they could afford the dress,&#8221; Baldridge says. &#8220;Jacqueline Kennedy, when she was first lady made sure, and her couturiers made sure that nobody else wore that dress that season. &#8220;​
Cele|*****y » Blog Archive » Laura Bush&#8217;s Fashion Nightmare
•••

Oh that is just unfortunate and i would feel awful but in the end media just blows things up.Who cares she looks good in it!
•••

cant imagine their faces + Looks on each others
•••
R

I think they all have great taste! I think that dress is stunning on her and totally appropriate for the occasion.
•••

Did it say what Laura Bush changed into?


(I would've laughed it off. And if I liked the dress THAT much I probably would've just left it on.)
•••

I thought you meant fashion nightmare for her dress as a fashion faux pas, it's bloody awful. Usually she dresses well.
•••

OMG. I love Laura Bush but she needs to fire her stylist. That outfit is OOOGLEEE. I'm also suprised 2 other people bought this old granny dress.
•••

caliprincess said:
OMG. I love Laura Bush but she needs to fire her stylist. That outfit is OOOGLEEE. I'm also suprised 2 other people bought this old granny dress.
Click to expand...


Actually there were THREE !! other people

lol, i heard she tries to be jackie o. but that is not even close to jackie o's classic style.
•••
C

it must be super awkward for everyone present.
•••
You must log in or register to reply here.
Register on TPF! This sidebar then disappears and there are less ads!
Sign Up
Top