River Russell Deary was born June 9 in New York. The birth was announced on Monday.

She previously told PEOPLE of her pregnancy, "I'm one of the lucky ones. ... It's a big, life-changing experience, and we're excited."

Congratulations to the happy family!
Wish them all the best!
•••

It's hard to believe Felicity had a baby.

Actually Keri gave birth on 06.09. They just announced it yesterday.
•••

Yay! She was STUNNING pregnant! Congrats to the beautiful family!
•••
K

She is such a natural beauty! Congratulations big time. 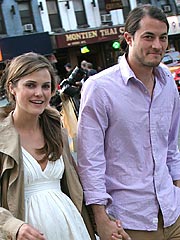 Good for them! I absolutely love her
•••


Yeah they all seem to go into labor together! Suri and Grier share a b-day too!
•••