Also found this on People 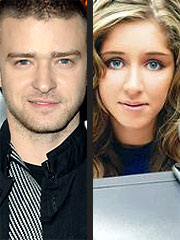 "In completely unpredicted news to all YouTubers and bloggers, we are proud to announce Esmee Denters has signed to Tennman Records and she will be joining me on tour this summer," Timberlake, 26, said in an announcement Tuesday.

"Esmee is the real deal and I cannot wait for the world to hear her," he says, "but all of her fans on YouTube should not worry ? we will keep you in the loop every step of the way."

The Dutch singer initially gained attention last summer by shooting (with her own Web cam) and posting cover performances of Beyoncé, Alanis Morrisette and Alicia Keys songs on her YouTube page  which generated some 21 million views. (See Denters singing an Alicia Keys cover below.)

An album she will write and record is slated for release later this year, and this month she will kick off a concert tour, mostly in Scandinavia.

"Words can't describe how amazing it is. I am so excited!" Denters says in a statement. "It is something I have always dreamed of doing. I have to thank YouTube and its viewers for giving me the opportunity to show the world my voice. I also have to thank Justin, one of the biggest artists in the world, for believing in me and making my dreams come true."
Click to expand...

WOW! She does sound great! That's amazing! Can you imagine?!
•••

YouTube has been a great venue for people to break out and get noticed... she should be interesting to hear live now!
•••

Great voice...but ive seen a few nasty comments about her.
•••

Shes cool! She can sing really well! Yay for her!
•••
You must log in or register to reply here.
Register on TPF! This sidebar then disappears and there are less ads!
Sign Up
Top