I don't think Justin Bieber needs to call the paps. I saw the pictures on E! News and it's not exactly clear what happened, but somehow during this incident Justin lost his shoes, Selena lost her phone, and they couldn't get to the car because the guy was blocking the door. I would have smacked him too. I mean seriously can't these guys be sued for harassment/stalking or something? I don't know how celebs do it.
If he did hit the guy and charges are pressed, I'm sure his lawyers will settle the matter and it will blow over in no time. I don't think he has anything to worry about.

hard to believe Biebs roughed up anyone

flsurfergirl3 said:
hard to believe Biebs roughed up anyone
Click to expand...

That boy is softer than drake.
C

Also, this made me laugh:

be on the lookout for a pixieish young man with great hair and rad dance moves
Click to expand...

I didn't hear anything about a dropped cell phone. All I saw were pictures on Perez. But if it happened the way Swanky heard it, I don't blame him for snapping. I would have snapped, too.


Russell Brand faced assault charges. (It was in 2010 and he went after a paparazzo for trying to take pictures up Katy Perry's skirt.)

Paps are crazy. If you go to youtube and look at some of the pap videos of big celebs, you won't even believe it. People get knocked over, shoved, injured, babies almost getting hurt, etc. They have absolutely no boundaries. I can't believe it's legal how close they are allowed to get to celebs.
I don't blame any celeb for snapping. It's out of control and ridiculous.
E

Door gets revenge for Pap slap:

They're going after the Stalkerazzi.

Paul Raef, 30, a freelance photographer, was charged with reckless driving, failing to obey the lawful order of a peace officer, two counts of following another vehicle too closely and reckless driving with the intent to capture pictures for commercial gain, City Atty. Carmen Trutanich said in a statement.

Raef faces up to one year in county jail and fines totaling $3,500, Trutanich said. He is scheduled to appear in court Aug. 9.

The law, A.B. 2479, imposes stiffer penalties &#8212; including possible jail time &#8212; for photographers who drive recklessly or block sidewalks in pursuit of celebrities and create a sense of "false imprisonment."
Click to expand...

Um I was just jamming to a hot song on Pandora and went to see who it was and it was Biebs. All Around the World. That makes at least 3 songs I like from this kid's latest album.

(backs out of thread slowly)

I'd REALLY love to see some laws ins place about this. . .
JUSTIN BIEBER PHOTOG KILLED After Chasing Bieber's Ferrari 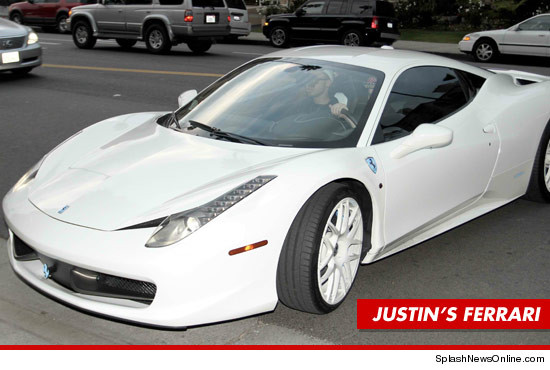 UPDATE: Justin Bieber was not in the Ferrari ... sources familiar with the situation tell TMZ. We're told one of Justin's friends was driving and another friend was in the passenger seat.

A paparazzo attempting to shoot photos of Justin Bieber's Ferrari was hit by another car and killed this evening -- although Bieber was NOT behind the wheel of the Ferrari ... TMZ has learned.

Law enforcement sources tell TMZ Bieber's white Ferrari was pulled over by California Highway Patrol for a routine traffic stop on Sepulveda Blvd. ... near the Getty Center in LA.

According to our sources, Bieber was DEFINITELY not driving at the time. It's unclear at this point who was driving, and if Justin was even in the car.

We're told a paparazzo -- who was following the Ferrari at the time of the pull over -- attempted to snap pics while officers conducted the traffic stop ... until CHP advised the photog to move back because the situation was unsafe.

At some point, we're told the photog was struck by an oncoming vehicle and killed.

Our sources say drugs and alcohol were not a factor for the driver of the vehicle that hit the photog.

LAPD is now on scene investigating the incident.

I'd REALLY love to see some laws ins place about this. . .
Click to expand...

The law I posted about up a couple of posts was just recently struck down by a Judge.

Looks like the boy got another tattoo too, and a pretty large one at that...