She's played all variety of legendary roles in her glittering Hollywood career.
But Julia Roberts reverted back to her favourite job - being a mother to her three children - on Sunday and she couldn't have looked happier.
The Pretty Woman actress activated her mother-on-duty mode, ditching every inch of glamour to cheer on her 10-year-old twin son Phinnaeus at a football game in Malibu, California, alongside her husband Daniel Moder. 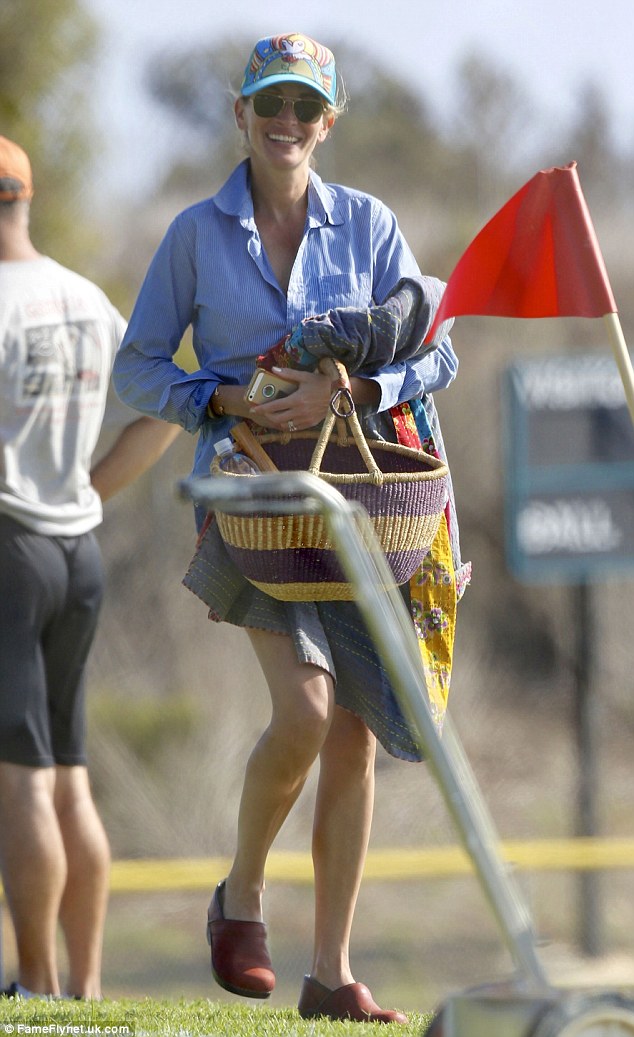 Mother on-duty: Make-up free Julia Roberts chose comfort over style as she cheered on her 10-year-old twin son Phinnaeus at a football match in Malibu, California, with her husband Daniel Moder on Sunday

She flashed her lithe legs in the thigh-skimming shorts which appeared to be one size too big for her as they were loose on the top half of her leg.
The Golden Globe winner appeared to have packed a change of clothes as later on she slipped a grey polo T-shirt over her top-half. 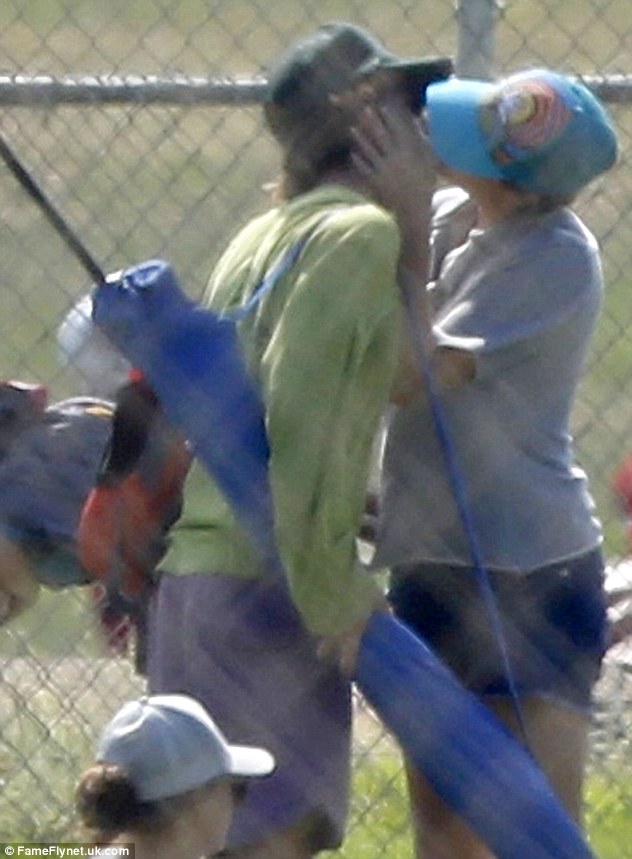 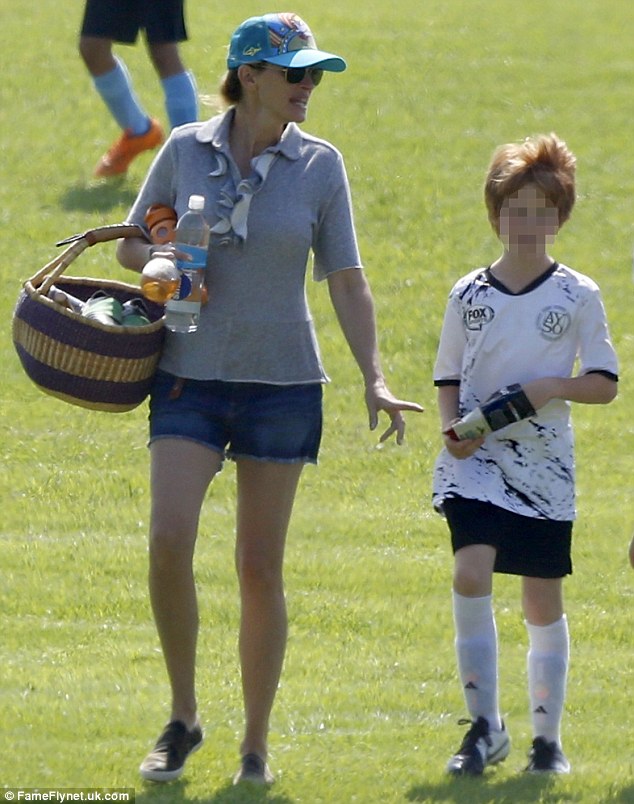 Famous pins: Julia, 47, flashed her lithe legs in the thigh-skimming denim shorts, which appeared to be one size too big for her, as she strolled across the playing field with her eldest son

Dressed in the dark? The Pretty Woman actress appeared to have thrown together a casual and mis-matched ensemble


Julia came prepared and was seen carrying a hefty striped basket to her front row seat.
She was determined to ward off the blazing afternoon rays and kept her self shaded with a multi-coloured printed baseball hat and a pair of classic design sunglasses.
Before settling down to watch the match, she greeted Daniel with a passionate kiss.
As she sauntered around the field, she couldn't have looked more at home as she relished a rare opportunity to dress down, wear no make-up and a messy hairstyle

Thumbs up: Julia encouraged Phinnaeus to play his best with her enthusiastic display 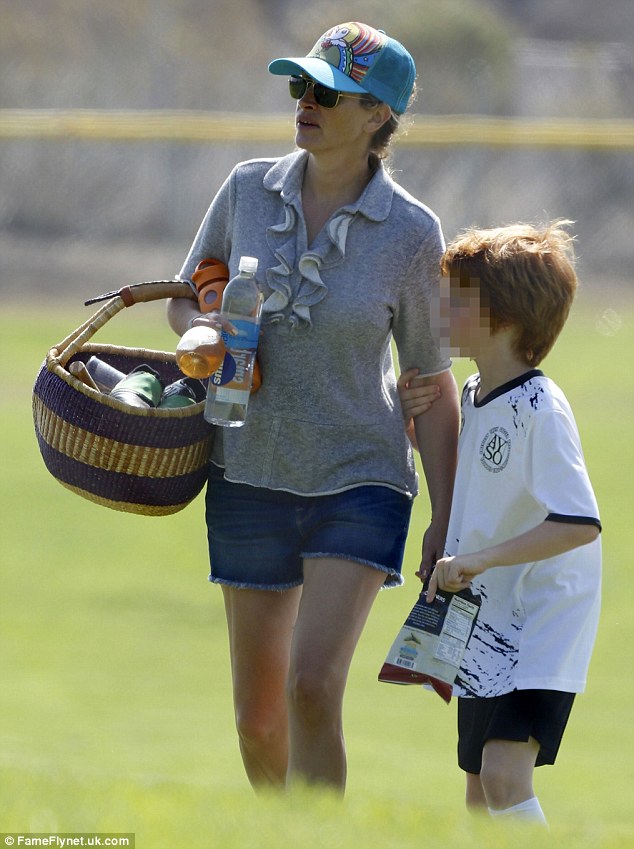 Taking a well-deserved break from the glitz and glam of Hollywood: Julia couldn't have looked more at home as she relished the rare opportunity to dress down, wear no make-up and a messy hairstyle

She was given no special treatment and happily took a pew on a picnic blanket alongside the other parents.
Julia is currently filming romantic comedy Mother's Day in which she stars alongside Jennifer Aniston, Kate Hudson and Jason Sudeikis.
The plot follows the lives of three mothers - Julia, Jennifer and Kate - in the run-up to the widely-celebrated occasion.
The movie, which is directed by Garry Marshall, is scheduled for release in America on April 29 2016. 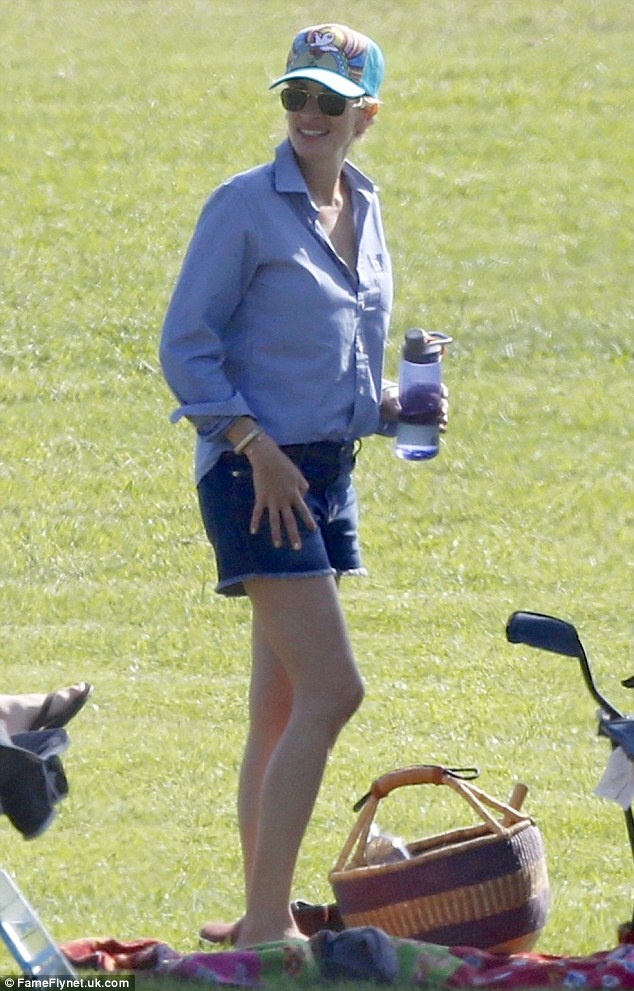 Mother's Day: Julia's latest role sees her play a mother in a new rom-com so it's fitting she was in parent mode recently

Attending the "Money Monster" premiere during the 69th annual Cannes Film Festival at the Palais des Festivals on May 12, 2016 in Cannes, France.
Wearing an Armani Privé gown / Chopard jewellery.

Save water and drink Champagne!

I adore her so much..... and I can almost hear her laugh in the pic with George

I love that she allows herself to have some wrinkles and age like a normal human being. The best part, she's physically able to smile and freely move her face, which doesn't seen to be the norm anymore with celebs!

Why isn't she wearing shoes?

For the love of beautiful things

pursecrzy said:
Why isn't she wearing shoes?
Click to expand...

I think she's been known for taking off her heels as soon as possible for a long time now.

I don't really get this Yes she's beautiful but there are lots of beautiful women. Why name her five times?

From People:
Julia Roberts is the 2017 World’s Most Beautiful Woman! Learn her secrets to staying young—and subscribe now for this special edition featuring over 50 pages of beauties — only in PEOPLE!

It’s been 26 years since Julia Roberts was first on the cover of PEOPLE’s World’s Most Beautiful issue, and she’s still our favorite pretty woman.

The stunning star is, for a record fifth time, the Most Beautiful Woman in the World – though she can hardly believe it. “I am very flattered,” she tells PEOPLE’s editor-in-chief Jess Cagle in this week’s cover story.

In fact, Roberts is now way ahead of pal George Clooney, who has been PEOPLE’s Sexiest Man Alive twice. Jokes Roberts of the feat, “I’m going to mention that in my Christmas card to the Clooneys this year.”

Roberts, 49, opens up about her happy 14-year marriage to cinematographer Danny Moder, her life with twins Hazel and Phinnaeus, 12, and Henry, 9, and the secrets of her ageless beauty in her interview with Cagle and PEOPLE’s style and beauty director, Andrea Lavinthal.

She thinks the best is yet to come: “I think I’m currently peaking.”

sdkitty said:
I don't really get this Yes she's beautiful but there are lots of beautiful women. Why name her five times?
Click to expand...

because the movie studio paid a pretty penny, I'm sure to get her on the cover... again. Is she about to start doing PR for a movie, book or something else? These titles usually coincide with some PR stuff.

I agree with you, she's attractive, but most beautiful? absolutely not
Reactions: TC1
I

i need a new hobby

this seems super random, like, people haven't forgotten her but she's not pinging anyone's radar for her beauty or for anything else, she's kind of semi-retired, no?

She is so not all that beautiful.
Reactions: White Orchid and baglover1973

I'd rate her as OK. No way is she what I would define as a beauty.
You must log in or register to reply here.
Share:
Reddit Pinterest Tumblr WhatsApp Email Link
Register on TPF! This sidebar then disappears and there are less ads!
Sign Up
Top Bottom