Lets hope its over this time. Come on Jess you're getting too old for this high school stuff. 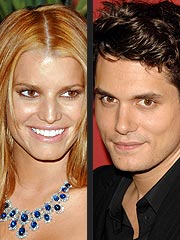 Jessica Simpson and John Mayer have ended their romance  again, and this time for good. Possibly.

"It has been rocky and it had been rocky, and it reached the end of the road," a source close to Mayer tells PEOPLE. "It is definitely over  the relationship has ended."

Those on Simpson's side confirm that the romance has come to an end, but say the door is always open for the pair to reunite.

Simpson, 26, and Mayer, 29, have been together about a year, though were coy about the relationship until recently.

Just last month, the couple split, but then only days later appeared to have reconciled after a heavy round of emailing and talking.

"They tried to make it work. They dated for a year," says the Mayer source, who adds that the couple's time together in New York and more recently in Cabo San Lucas, Mexico were an attempt "to talk things over."

Simpson's pal says the singer is "used to" the back and forth with Mayer by now. "She love [John] but she has to be true to herself."

As for any reason's behind this most recent split: "Every relationship has its differences, but with Jessica and John those differences were starting to become more and more apparent," says the Mayer source.
•••

I never liked them together at all... in fact, I really liked John Mayer before her.
•••

there's something about her that just doesn't set well with me...maybe its the way treated Nick. She just seems so immature
•••

They were a very odd couple...might be for the best to make a clean break.
•••

I love her, and I like him. I hope she finds someone that makes her happy soon. I could not imagine having every single arguement broadcasted every single time! They clearly both need to move on and be happy. I see him with someone like Joss Stone!
•••
K

I never believe all this stuff.
•••

They didn't seem right together to me.
•••

I agree with what others are saying - they never seemed like a good match IMO. She comes across immature but probably for good reason. She was with Nick from such a young age. I think she really needs to take the time to explore the adult dating world.
•••

I think John Mayer is so hot and talented and seeing him with her kinda made all of that go away. I'm not saying she's a terrible person, but she always seems so shallow whereas he is always so deep and passionate in his writing. I hope they both find happiness elsewhere.
•••

holly di said:
They didn't seem right together to me.
Click to expand...

It's comes down to respecting each other. I don't think he really respected her at all. They are just not intellectually compatible, IMO. They are both better off with someone else that they can respect and have in common with.