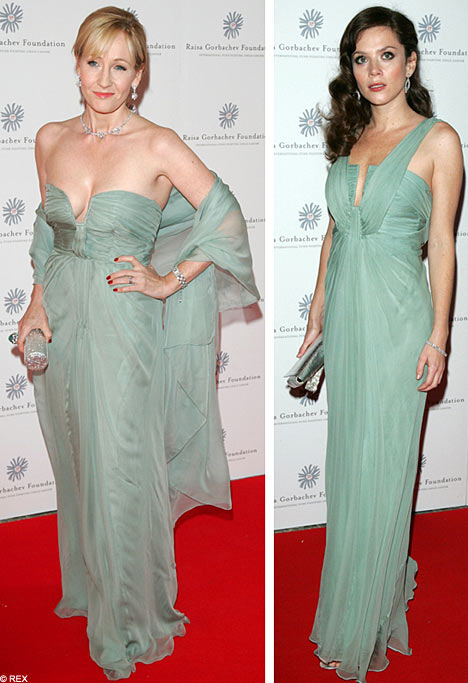 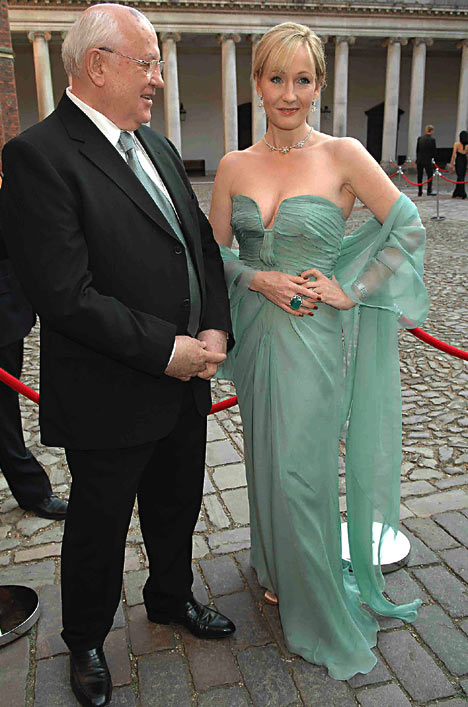 
It's happened to the best of us - but it's hardly what you would expect from two celebrities with access to a stash of cash and expensive stylists.

Author JK Rowling and actress Anna Friel rocked up on the red carpet in the same flowing green dress - albeit worn in a slightly different way. The multi-millionaire author of the Harry Potter books, and the former Brookside star attended a gala dinner at Hampton Court Palace on Saturday night, both wearing the dress. Rowling accessorised hers with a large emerald ring.


Both attended an event hosted by Mikhail Gorbachev, themed around a Russian midsummer fantasy, which raised money for the Raisa Gorbachev Foundation for sick children.

Miss Rowling, who wrote her first book in cafes as her young daughter slept, chatted and joked with the former Soviet leader. She obviously felt his was a cause worth supporting. She is a regular fundraiser for Russian charities.

Decorated: A slick Sir Bob Geldof at the party

Viscount Rothermere, chairman of the Daily Mail and General Trust, was in attendance with his wife Viscountess Rothermere, a patron of the event.
Harry Potter star Emma Watson, better known as Hermione attended the event and wore an unusual black and gold outfit.
A well scrubbed Sir Bob Geldof was also present, and he completed his sober black tie outfit with an array of medals for his charity work, as were Naomi Campbell and Elle Macpherson.

Other guests included Baroness Thatcher, also a patron, actor Ralph Fiennes, singer Rod Stewart and playwright Sir Tom Stoppard.
Dinner was followed by performances from Sir Elton John and the Scissor Sisters. Mr Gorbachev-whose wife Raisa died of leukaemia in 1999, spoke about how proceeds from the event would be used.

'Through the creation of the Raisa Gorbachev Centre of children's haematology and transplantology in St Petersburg, much needed medical care of an international standard will soon be available.
'Our efforts in this project give hope to many sick children and their parents.' The foundation aims to finance projects such as the creation of a national bone marrow register in Russia, as well as supporting the families of those diagnosed with terminal cancer
•••

For All Things Authentic!

Well at least they wore it differently.
•••

They both looked lovely, I think Anna looks slightly better with the dress draped as a halterneck, but they both look lovely.

I wonder if JK has spent some of her hard earned cash on a little bit of cosmetic work, she sure looks amazing and quite different to how she used to

or maybe its just wizardry and magic lol

They both look great! I love the dress and the fact that they wore it different looks great too.
•••

If you didn't tell me it was the same dress, I would have never known. Both women make the dress their own and look fab.

^^ ITa but i do like it better on JK..seriously that boobage fills out the dress nicely imo
•••

H_addict said:
If you didn't tell me it was the same dress, I would have never known. Both women make the dress their own and look fab.

In the picture with JK wearing it, it looks like it's slipping off, and kind of skanky. Wearing it as a halter is a much better idea.
•••
J

They both look great, but I like the straps on the dress
better than without.
•••

I think JK looks better as well and I agree that they really make it their own look, besides the color being very similiar I think they can get away with it as they wear it so differently.
•••

Bag*Snob said:
Well at least they wore it differently.
Click to expand...

I think it is fantastic that they each made the dress their own -- JK gave it a really glam vibe with her emerald ring and diamond necklace, while Anna Friel made it look very old Hollywood glamour with her side-swept wavy hair and the scarf draped over her shoulders.
•••
You must log in or register to reply here.
Share:
Reddit Pinterest WhatsApp Email Share
Register on TPF! This sidebar then disappears and there are less ads!
Sign Up
Top