So who was that handsome mystery man Jennifer Aniston was spotted holding hands with during a romantic dinner over Memorial Day weekend?

The case is solved: It's 36-year-old British model Paul Sculfor, and the pair already have been dating for several weeks, PEOPLE reveals in its latest cover story, on newsstands Friday.

"He's a lovely guy," says his friend and former flame, London socialite Lady Victoria Hervey. "A gentleman. Simple things, like opening doors, he does all that. He'll think of the woman before himself." 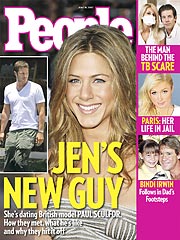 The 6-foot-tall former boxer and construction worker has shown up in ads for Christian Dior and Jean Paul Gaultier, but he may be best known for a British commercial he starred in for Levi's, in which he plays a drowned fisherman with three mermaids desperately after him and his jeans.

Sculfor and Aniston were first spotted out together over Memorial Day weekend, when they had an intimate dinner at Santa Monica's One Pico restaurant in the Shutters Hotel. The pair slipped into the beachfront eatery with Sculfor gently rubbing Aniston's back as they waited for a table.

Single since she split from Vince Vaughn last year after more than a year together, Aniston, 38, has taken her time getting back on the dating scene. Sculfor, meanwhile, formerly dated Lisa Snowdon (yes, George Clooney's ex) for two years.

When it comes to relationships, Sculfor, who now lives in Los Angeles and is under contract with New York Model Management, once told Britain's the Mirror: "It's hard keeping a girlfriend in this business  you end up conducting your relationship on the phone."

He is def. easy on the eye!

Very nice to look at, I hope it works for her she seems so sweet.
•••

She needs a gorgeous guy after the Brad Pitt Drama! I think she is wonderful and may she have many blessings in her life and many beautiful children!
•••

This is one celebrity that I really want to be happy! I don't know her, but it just seems like she deserves it!
•••

marclover said:
This is one celebrity that I really want to be happy! I don't know her, but it just seems like she deserves it!
Click to expand...

Too young for her. Can't see them have a long term relationship.
•••

Yea, a hottie, he's up there with Brad Pitt!

Hopefully it works out for her.
•••

A few more pics of this hottie