IntheOcean said:
Love your collection, I'm a fan of big and slouchy bags too, especially in black and dark blue/green/red colors.

Do you have any bags that you really liked but when you purchased them or tried them on at the store, you realized they just did not work out for you?
Click to expand...

Thank you! This is honestly more color than I imagined I would ever have, especially since my mom instilled in me that all-black everything is always the safest choice haha

Hmm, that's genuinely a tough question to answer since my limited budget means that I agonize over every decision I make, but there's definitely been a few duds here and there.

Out of my current collection, I would say I don't reach for the YSL Muse and Muse Two as often as I'd like; the Muse (notwithstanding the horrible dye job I did

) because of the awkward handle length - the oversized's proportions feel much more "correct" for lack of a better word, and the Muse Two because of how finicky the straps and closure situation is - I commute by public transportation and opening and closing the bag gets tiring fast when you're on the move.

With regards to the ones that got away, I once really liked the idea of shopper totes - think Celine Cabas, LV Neverfull. When I was in college, I used to want a Neverfull GM so bad because I felt like I needed the large open space, but after saving up for quite some time and trying one at the store I found that my style simply has changed and evolved during that period of time. I think I also outgrew monograms in general, largely because how my job as a journalist just wasn't the best time and place for visible logos.

Even now, I'm looking at smaller bags that's the same length as a continental wallet - something I wouldn't even consider 3 to 4 years ago when I started building my collection. Maybe I'll even ditch all these for a camera bag one day

IOSCHA said:
the Muse Two because of how finicky the straps and closure situation is - I commute by public transportation and opening and closing the bag gets tiring fast when you're on the move.
Click to expand...

Thanks, I was actually eyeing the Muse Two for quite some time, but I don't much like fussy bags

But it's still gorgeous, though.

I feel the same way about monograms and/or large recognizable logos.

I don't think us big bags lovers would ever swap all of those spacious beauties for small bags, not all of them, anyway!

But I'm sure one or two smaller bags wouldn't hurt, they're very handy when you need to run a quick errand, but the pockets in your jeans or jacket aren't enough. Especially those with a crossbody strap.
Reactions: IOSCHA
•••

IntheOcean said:
I don't think us big bags lovers would ever swap all of those spacious beauties for small bags, not all of them, anyway!

But I'm sure one or two smaller bags wouldn't hurt, they're very handy when you need to run a quick errand, but the pockets in your jeans or jacket aren't enough. Especially those with a crossbody strap.
Click to expand...

That is true! I don't see myself getting rid of my collection anytime soon - or ever!

That said, I'm considering getting a small-ish crossbody (or two, or three - depends on my self-restraint

) for quick trips to the corner shops.

I'm not really sure I can downsize to something the size of a Marc Jacobs Snapshot, so I'm still on the lookout for the perfect balance of size and practicality. Do you have any suggestions?
Reactions: 880
•••

IOSCHA said:
Do you have any suggestions?
Click to expand...

Oh, I wish I did... I used to have a Proenza Schouler PS1 Pouch, which was very user-friendly and I sold it simply because the color I picked didn't really go with the rest of my wardrobe. I don't know what I was thinking, it was bright yellow and totally cute, but I had the hardest time figuring out what to wear it with. But I think the bag must have either a pocket on the outside or a zipped compartment(s). If it's just a flap bag, with no exterior pocket, and especially if it has a fussy locking mechanism, it wouldn't be comfortable to use, IMO. For instance, I really like the Givenchy GV3, but I don't think it would work for me, as pretty as it is.

And then there's the question of compartments: should it only have one or two or three separated compartments? I don't really carry bulky items like a camera, but it seems like quite a few people prefer their small bags to have just one large section and maybe a slip or a zipped pocket.
•••

I’ve just read a number of your posts and will come back later when I have more time. You’re a nice storyteller…funny, intelligent, enthusiastic and are a lovely addition to the purse form.
Nice bags.
Reactions: maxroxxherhandbags, jellyv and IOSCHA
•••

maxxout said:
I’ve just read a number of your posts and will come back later when I have more time. You’re a nice storyteller…funny, intelligent, enthusiastic and are a lovely addition to the purse form.
Nice bags.
Click to expand...

Ah how you make me blush

So I've been on the hunt for a smaller bag as my shoulders and arm are getting creaky, and I stumbled upon this Alexander Wang Rockie at the local boutique. Well, more like, re-stumbled upon since I definitely saw this bag when I first browsed their inventory back in 2020.

I'm not at all surprised that this hasn't sold for those 2 years - it definitely has its share of battle scars, that's for sure. I decided to take a chance on this AW thinking it could be another dye project, since it's well under the market rate ($144!) and I would be deathly afraid to experiment on a pristine example. Either that, or I could leave it as it is to be used as a daily go-to bag I wouldn't mind getting rained on.

The curved zipper opening is a bit annoying though, but somewhere along the way this journey went from "let's collect bags" to "let's collect bags I couldn't afford during highschool/university", so I'm hoping that my sense of nostalgia will tide me over. Also, since Y2K is a thing now, I guess I'm just preparing for the inevitable 2010s revival somewhere down the line

Love the renewed life you‘ve given to your bags! And, bigger bags are coming back into style
thank you for sharing your wonderful stories!
Reactions: IOSCHA
•••

So I was on the hunt for a brown or tan bag after I gifted the Mulberry Bayswater to a coworker (a fellow bag aficionado!), and I came across this Chloe Hampton for just $100. There wasn't much I could find online except that it came out in 2005 and retailed for $1200ish, so I'm guessing that it wasn't a popular style. Given the rise of Y2K and my penchant for rare pieces, I bought it in a heartbeat. 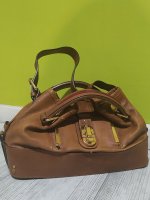 Immediately after unboxing, I knew right away why it wasn't for everyone. The Hampton is a rather peculiar design; is it a tote? A shoulder bag? A hobo? Who knows, but I certainly appreciate the creative venture. Granted, it's not the most comfortable or practical, since the handles are way too chunky to be held normally and the shoulder strap too short for the bag's proportions. Yet it all doesn't matter to me, somehow.

There is a certain je ne sais quoi about the Hampton that drew me in. Before clicking checkout, I was looking at a Michael Kors Hamilton (sensible and affordable) and a Coach Rogue (modern and understated), but it was a 17 year old bag with chunky hardware that ultimately went home with me. Is it the rarity? The price? The fact that it's just..brown and I was looking for a brown bag? I don't know for sure, but this bag traveled the world over from California to a small neighborhood just outside Jakarta, and I don't think her journey is finished yet.
Reactions: IntheOcean, serenei and nastywoman
•••

A small update! I have since found the PS1 a good home since I don't reach for it as often. I also forgot to upload this Sonoma so here it is for posterity. 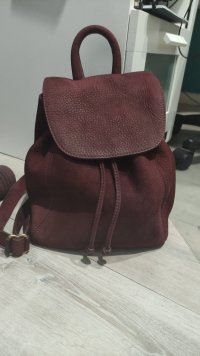 Generally I'm not too fond of backpacks, so this was really just an exercise in rehabbing. I might keep it because of how rare it is in Indonesia, but I don't expect to be using it daily. The color is extremely pretty though - I might get something in that kind of red. 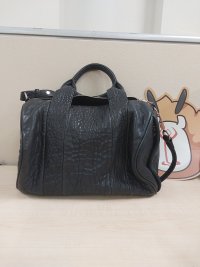 My most recent find is this 2012 Alexander Wang Rocco with rose gold hardware. Given that I enjoyed the Rockie so much, I might as well get the Rocco for the office, right? This was also listed at such a good price that I went into autopilot and entered my CVV without skipping a beat.

When it arrived, I discovered the absolute softest leather I have ever touched in my history of preowned bags. Given that it was a decade old, it was kind of surprising to see that the lambskin isn't dry, way smooshier than my '06 Work and the dearly departed PS1.

But my God was it heavy though. I chucked everything that was in my usual office bag today and found that it was suspiciously heavy. I weighed it and what did the scale say? 7.16 pounds

By the end of this month, I'll either get very toned arms or get rushed to the ER for dislocated joints, I'm sure.

Also, there were some popped stitches near the zipper end, so I'm not sure if that was because of the weight. Either way, since this is my second purchase this year that have popped zippers, I feel that this is the universe telling me to learn leather stitching. Fingers crossed I don't wreck it even more!
Reactions: Comfortably Numb
•••
You must log in or register to reply here.
Share:
Reddit Pinterest WhatsApp Email Share
Register on TPF! This sidebar then disappears and there are less ads!
Sign Up
Top