We all got in the car and took off at 7:20. Then hit traffic because of construction which tacked on an extra 15 minutes.

Then DH decided he had to go potty and get something else to eat on top of the bfast he ate before we left...

So we got to Round Rock an hour after they opened. I had a couple of bags on hold but I wanted to see what was still on the shelves... Got handed a coupon for an extra 10% off of the 20% off of the marked down prices. Headed to the back as soon as I got there.

I grabbed a Natural Ali and the only slim flap color I saw (in Whiskey). There was one other Whiskey slim flap and a Whiskey Ali (which was pretty beat up). I then had them get my bags on hold out for me. The Natural Ali on hold for me was better than the one on the shelf so I put that back. I took the stuffins out of both bags and looked and thought. DH was really pretty good about me going and getting a bag so I didn't even try for two. The other Whiskey slim flap got picked up by someone (who bought it two people in front of me in line when I checked out) and when I looked more closely at the one I had, it had a black spot on it about the size of a nickel on the side seam and a bunch of little black dots on the back side.

Two SAs there were really helpful and checked to see if they had any more slim flaps in back - nope. That was it. They checked with the manager and she said if I wanted the Whiskey slim flap that I could get an extra 10% off of the other discounts but it would be a final sale item. I thought about it (and thought about it). I wasn't as wild about the whiskey color and I liked the fact that the Ali would sit flat on the floor while the slim flap wouldn't (despite what I said in the slim Carly thread), and at first I thought the Ali might be too big for me but then I thought about my recent thoughts that my medium Carly wasn't quite as big as I like and the slim flap would be *about* the same size (although a little thinner than the Carly I think). And the fact that I had went there for the Ali (although I didn't know they would have slim flaps....) SOOOOOO.....I ended up with........ 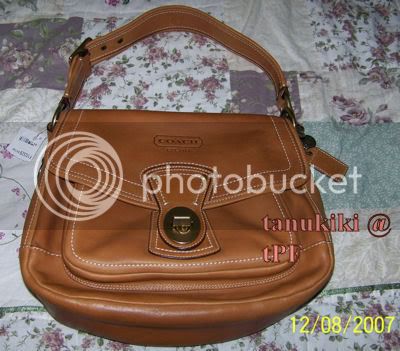 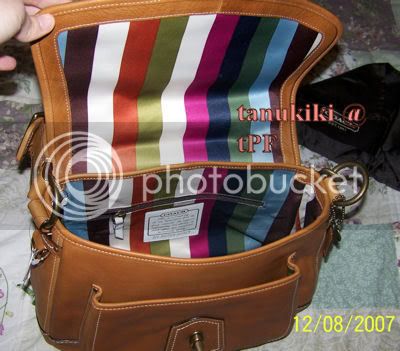 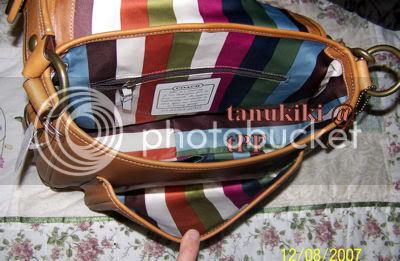 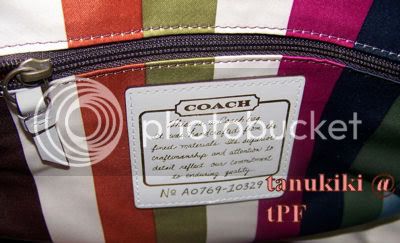 No bullseye on her! 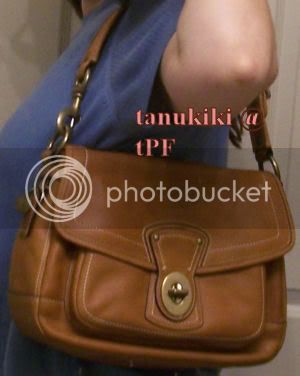 Man I need to lose weight

DH is making me wait until Christmas to "get her" BUT I convinced him to let me take some pics first for here. He said we are all dorks and then laughed. One of the SAs at Round Rock (I love her as she helped me last time) wanted to know how they had legacy bags and she was impressed by us when I told her about how when things come out, someone on tPF will post and BOOM- we are in action! This is the biggest Coach bag I've owned yet and she's definitely going to give Carly a run for her money for who is my favorite. I have to put a pretty scarf on her (which I happen to have bought in addition to a couple of other small items for PCE earlier this week - dang I haven't even posted about that yet BUT I HAD to get this on here tonight to share my love with and for y'all)!!!!
•••

Thanks Candace. I really started liking the way this bag looked online recently and thought I'd never get one.
•••

Wow!! Congratulations!! That is beautiful! I actually called the RR outlet tonight to ask what they had and she said "only a camel ali...for 299!" I'm not sure she knew what she was talking about, tho. She said no shoulder bags, but they did have some satchels...she seemed a little confused, or maybe she didn't want to tell me!

I'm sure you'll enjoy your lovely Ali!! Thanks for posting pics!

mommyville--- what bags am I going to take to disney now for the nightlife??? lol

CCfor C said:
Wow!! Congratulations!! That is beautiful! I actually called the RR outlet tonight to ask what they had and she said "only a camel ali...for 299!" I'm not sure she knew what she was talking about, tho. She said no shoulder bags, but they did have some satchels...she seemed a little confused, or maybe she didn't want to tell me!

I'm sure you'll enjoy your lovely Ali!! Thanks for posting pics!

The Legacy bags were FLYING out of there. Everyone checking out had at least one it seemed. They had some satchels and small zip bags and such. When I left (unless they had more in the back), they had one Ali in natural, one Ali in Whiskey, and the slim flap in Whiskey I decided not to get. There was half a table of black Legacy items but no Ali's or slim flaps. I wouldn't be surprised if they sold out of most of it. The Camel Ali might have been the natural or the whiskey. Hard to tell. Some SAs don;t know their stuff as well as others but they all are pretty nice there!
•••

AWW congrats on your Natural Ali!! It's BEAUTIFUL!!!! I love the color and it looks GREAT on you! It's funny that you took the whole crew with you.. My DH would NOT have been down with that.. I have to go alone!

I wanted to go so bad, but I couldn't today. I am dying for a Black Ali or Shoulder bag! Did you see any shoulder bags there at all? They are probably all gone by now

everyone @ my outlet was going nuts for pebbled leather, wallets swingpacks and suitcase?(wtf) I only saw 1 other person buying a legacy peice. Strange.

They had 2 pond satchels left when I was there... and tonnnnnnns of white ali's
•••