If you could keep only one...

While trying to decide if I wanted to swap a few of my bags to make room for new ones I started thinking. If you could choose only one bag to keep from your whole collection, which would you choose? I'd love to hear everyone's choices (and pics if you'd like to share!) and reasons why. Sentimental reasons? Availability (or lack thereof)? Versatility? etc.

Probably my black Urbane, she's so sleek and stylish...

Way too difficult! I have trouble picking the top five or ten.

If I could only pick one, it wouldn't necessarily be my favorite. It would be the most versatile of all my bags. So it would have to be a neutral color, appropriate for all seasons, comfortable to carry and large enough to hold everything I ever want to carry.

Since most of my bags are not neutral colors they're out, but I almost picked ultraviolet haircalf Candace because it is a great size and breathtakingly gorgeous, but haircalf seems seasonal. All the suede bags are out because they are seasonal even though some of the colors are more neutral.

First runner up is Legacy drawstring in navy. The bag can handle all kinds of weather, the color goes with everything, it is big enough, and very comfortable to carry. However it seems too casual for some occasions.

The winner is 2007 Bleecker large flap in ink. It's not a very dressy bag either but it is dressier than the drawstring. It is so classic that it will never go out of style.

Why? Christmas season, 2010, our 15 year old parrot, Cora, was especially sick. She'd had problems her entire life, despite our expert avian veterinarian, and in a flurry of vet visits, died the day after Christmas that year. (Autopsy discovered auto-immune disease.) A few weeks later, we signed on for two baby red-bellied parrots that were still being weaned.

(Please no lectures on adopting rather than breeding. We currently have eight parrots, and "have had" a total of ten. Of those, six were either re-homes, neglected, abused, "dump offs", or spca-pickups. But in the aftermath of Cora's death, we wanted the two new ones to be babies, so they could more easily bond with our daughter. And ironically, we had only planned on taking one of the babies. We ended up taking both baby boys, because we never wanted to worry that the other brother went to a home that wasn't good. Also, the woman who hatched these boys used to work for a project that breeds endangered parrots. Believe me, she knows what she's doing.)

Anyway, we spent two months visiting those babies, six days a week, one hour a day. On top of that, during those two months, we also had a cockatiel die (an egg issue that developed in her old age). So now we had still more frantic vet visits, mixed in with all those visits with the babies. *And*, the next thing we knew, we also took in *three* more birds completely unexpectedly. One had recently been bumped out of her third home (and is now the queen of our house), another was a "left-over/runt" from her clutch, and the third had been "dumped" because her previous owner wanted to "upgrade".

So in a span of three months, we lost two birds and gained *five*; did almost daily visits to the new babies; and had countless vet visits between both the deaths and the well-checks for the new birds. Oh, and add in the precautionary quarantining you have to do each time you bring a new bird into your house.

But my point is this ..... during those entire three months, I never once took the time to change my handbag. I used this grey Zoe the entire time. She sat on vet counters, bird cages, even giant boxes of Zupreem food pellets. And for the record, she came out a good bit slouchier, but absolutely spotless otherwise.

Mine would be my Dragonfly Duffle. The leather on it is just fantastic! 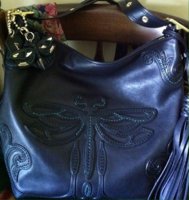 I can't believe this question; the thought of picking one gives me an anxiety attack.

I'll get back to you when I've started breathing again. lol

So hard to choose only 1! So I have to choose zebra Carrie because she's dressy and a neutral so she can be an everyday bag and I won't have to worry about color transfer 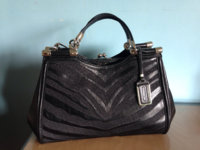 My first thought I had was me with my bags kind of like Steve Martin in the movie The Jerk, "I need this..."

In reality, I think my chestnut Phoebe would be the one I choose since not it's not too dressy or casual.
Plus I love the color, the leather, it's easy to carry and holds everything I need to have with me.

Haha sorry to stress you out!

I haven't actually decided yet either, buy I am enjoying everyone's pics/stories!

sthrncin said:
Mine would be my Dragonfly Duffle. The leather on it is just fantastic! View attachment 2794878
Click to expand...

This bag is just gorgeous. I can't believe I missed seeing this one when they were first put out by Coach.

If I had to choose just one, my black Legacy Harper...she's classy, strong, can be dressed up or down, and holds A LOT of stuff. My black Sophia is all of that except she doesn't hold what Harper can.

This is a bit difficult because I can't part with a lot of my bags. If I have to choose one, it would be my colorblock Patricia. This is my first bag that I bought with my own paycheck. It is very useful and stylish.

Get real! You mean which one in each color?

Nymeria1 said:
This bag is just gorgeous. I can't believe I missed seeing this one when they were first put out by Coach.
Click to expand...

Thank you so much! It really is a one of a kind bag. The leather is gorgeous and thick on them.
You must log in or register to reply here.
Share:
Reddit Pinterest Tumblr WhatsApp Email Link
Register on TPF! This sidebar then disappears and there are less ads!
Sign Up
Top Bottom