She is at the outlet, the SA was super duper nice, put her on hold for me. I got there and there was only one and she had no shoulder strap...which hello is the best part about her!!!! So they said they would take 75% off and I was like, nooooooooooooooo...I want the whole bag. I walked around a while, the SA was very apologetic and brought out a large (like it was pieced leather stripes...never seen it, wasn't diggin' it!) sabrina in blue hues. Nope. I started digging around and found one!!!!!! She had her strap! She was $219!!!!!!!!! Hot diggity dog!!!

Also, to give SA's some props...I was explaining how I've purchased 3 other bags from them since January and everytime I call some will do a hold, and one said no to holding and even a charge hold. The SA brought (I guess the store mgr) another person over and her face squinched up when I told her that. She asked who I spoke to, I told her I had no idea. The SA did tell me techinically these bags are not on the floor yet!

She did say they had a cherry that was a store return, but it got snatched up within 30 minutes of the return! Bummer!!!

I sooooooooo am feeling buyers remorse even though she was a steal!!! 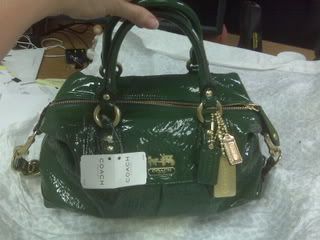 Wow, Omg! congrats!! I think I may have to explain to DH about my patent sabrina going to the outlets.. I may have to get one there and return the one he bought me... I just can't stand the thought of him paying double for a bag.. you know?

I am officially stalking the outlets for the green patent sabrina.

omg you passed up an ombre sabrina? /dies ;p;p

Lovely!!! I know, my SA's used to do holds for me no matter WHAT then they just STPPED! Even if I tried to do a charge-hold. I wish they would have a little compassion for those that drive so far! I go 2-3 times a month but I know I still miss things!

I was told that Thur. is the best day to hit the outlet (stocking for the wekend) but when I went yesterday...it was the WORST selection I;ve ever come across. I MAY senak back up there tonight!!!

Congrats on the new bag! Sabrina's an addiction!!! I ALWAYS end up switching back into mine!!!

Don't feel buyers remore sweetie that is one HOT bag!! And you got it for a steal!!! Its sounds like the other Sabrina might have been the Ombre. CONGRATS!!!!!

LOL! I hear ya Taralindsey!

I am so jealous, that Sabrina is TDF!!! Congrats on a great deal!!! I wish we had outlets here in Arizona ...

Yes it was the Ombre...apparently a crown jewel for you ladies, I just wasn't diggin' it, but yes they had three there!

love coach more...NO I have no idea! i wasn't crazy about it so I didn't bother looking at the price (I'm ducking down as you ladies might begin to hurl items as me!) eeek! this is how rumors get started! tee hee hee! 219 was for the small patent only!
J

What an awesome find! congrats!

I would love to do them, if you ever wanted them.. I am looking to build my portfolio

So, was this sabrina at San Marcos, because I have been known to drive all the way there for a bag, LOL!