Last night at my parent's Christmas Eve party a family friend's daughter was showing off and bragging about this case she purchased for her iPhone at Louis Vuitton! I wasn't in the room when she started the conversation but when I entered and heard what she was telling people I just had to intervene! When I saw the case I laughed in her face! MEAN?! Yes it was but if you're going to have a fake at least do your research and don't come to the family gathering of LV lovers!

She was telling people:
1) she purchased the case for $350
2) It just came out for the 2012 collection
3) she special ordered it directly from Paris and only New York will be receiving them

So I politely told her it was fake! And showed her my iPhone case....you know....the authentic one! The girl literally started to curse me out and stopped once all the women of my family brought out their iPhone cases and one cousin of mine even had her receipt! We embarrassed the girl but we were wrong? Was I wrong? I don't think so!

This is the case she tried to pass off as real! 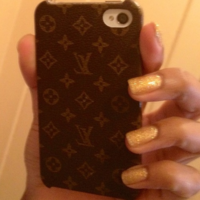 Well, I would have let her have the fun of believing that she is right and laugh at it after the party. I'm sure there are more people who knows she got it all wrong.

Lately I've seen a lot of people walking on the street and carrying fake LV's but the attitude is like: "look what I've got, don't touch". They just don't any know better.
C

Yeah, I would have let her have fun, too.

I wouldn't call her out -- she knows it's a fake

I just let things like that roll...I personally do not like to embarrass anyone. Maybe she loves it so much she wanted it to be real?

I agree with what you did - after all, that big story about it being a special order from Paris ... she didn't need to go on with all that.

It's not wrong but I think you might have hurt and embarrassed her. I would have let it slide. Knowing it's fake is enough for me, didn't have to make her lose her face infront of all those people.

Perhaps after got cheated?

Perhaps she got cheated?

The girl didn't get cheated! She knew it was fake!

People, I'm a realist! Having fakes can symbolize the dishonesty and unethical behaviors of people! But sitting there bragging and lying was over the top for me! I don't try to embarrass people but this one had it coming! It wasn't her only fib of the evening but it was a fib she was called out on!

Oh and I'm not a talk behind one's back type of person! So if we allowed her to carry on, then talked behind her back when she left; that would have been worse!

I think if my hubby was there, he would have done exactly as you have done!

Me, I would have just let them spin their sh*t and then have a giggle afterwards.

I don't know she sounds like she has issues. Maybe is isn't in the holiday spirit but then again when is she going to get called out? Maybe at a job or with an even bigger lie? Very odd situation and even stranger that she bragged and got so hostile!

The hostility was probably due to her getting defensive.

2spoilt said:
Me, I would have just let them spin their sh*t and then have a giggle afterwards.
Click to expand...

This would be me, perhaps she feels insecure or that she wouldn't measure up to the rest of your family, who as you say, are LV lovers, unless she had something to show too?
It doesn't excuse her lying but there's no point in making a fool of someone in front of others, I think that's alittle harsh, even if they're in the wrong...
You must log in or register to reply here.
Share:
Reddit Pinterest Tumblr WhatsApp Email Link
Register on TPF! This sidebar then disappears and there are less ads!
Sign Up
Top Bottom