I ACTUALLY THOUGHT THIS WAS KINDA SAD....

MONTGOMERY, Ala. - Hogzilla is being made into a horror movie. But the sequel may be even bigger: Meet Monster Pig. An 11-year-old Alabama boy used a pistol to kill a wild hog his father says weighed a staggering 1,051 pounds and measured 9-feet-4 from the tip of its snout to the base of its tail. Think hams as big as car tires.

If the claims are accurate, Jamison Stone's trophy boar would be bigger than Hogzilla, the famed wild hog that grew to seemingly mythical proportions after being killed in south Georgia in 2004.

Hogzilla originally was thought to weigh 1,000 pounds and measure 12 feet in length. National Geographic experts who unearthed its remains believe the animal actually weighed about 800 pounds and was 8 feet long.
Regardless of the comparison, Jamison is reveling in the attention over his pig, which has a Web site put up by his father  http://www.monsterpig.com  that is generating Internet buzz.
"It feels really good," Jamison, of Pickensville, said in a telephone interview with The Associated Press. "It's a good accomplishment. I probably won't ever kill anything else that big."
Jamison, who killed his first deer at age 5, was hunting with father Mike Stone and two guides in east Alabama on May 3 when he bagged Hogzilla II. He said he shot the huge animal eight times with a .50-caliber revolver and chased it for three hours through hilly woods before finishing it off with a point-blank shot.
Through it all there was the fear that the animal would turn and charge them, as wild boars have a reputation of doing.
"I was a little bit scared, a little bit excited," said Jamison, who just finished the sixth grade on the honor roll at Christian Heritage Academy, a small, private school.
His father said that, just to be extra safe, he and the guides had high-powered rifles aimed and ready to fire in case the beast with 5-inch tusks decided to charge.
With the pig finally dead in a creek bed on the 2,500-acre Lost Creek Plantation, a commercial hunting preserve in Delta, trees had to be cut down and a backhoe brought in to bring Jamison's prize out of the woods.
It was hauled on a truck to the Clay County Farmers Exchange in Lineville, where Jeff Kinder said they used his scale, which was recently calibrated, to weigh the hog.
Kinder, who didn't witness the weigh-in, said he was baffled to hear the reported weight of 1,051 pounds because his scale  an old, manual style with sliding weights  only measures to the nearest 10.
"I didn't quite understand that," he said.
Mike Stone said the scale balanced one notch past the 1,050-pound mark, and he thought it meant a weight of 1,051 pounds.
"It probably weighed 1,060 pounds. We were just afraid to change it once the story was out," he said.
The hog's head is now being mounted on an extra-large foam form by Jerry Cunningham of Jerry's Taxidermy in Oxford. Cunningham said the animal measured 54 inches around the head, 74 inches around the shoulders and 11 inches from the eyes to the end of its snout.
"It's huge," he said. "It's just the biggest thing I've ever seen."
Mike Stone is having sausage made from the rest of the animal. "We'll probably get 500 to 700 pounds," he said.
Jamison, meanwhile, has been offered a small part in "The Legend of Hogzilla," a small-time horror flick based on the tale of the Georgia boar. The movie is holding casting calls with plans to begin filming in Georgia.
Jamison is enjoying the newfound celebrity generated by the hog hunt, but he said he prefers hunting pheasants to monster pigs.
"They are a little less dangerous."
___

AP Photo: In this photo released by Melynne Stone, Jamison Stone, 11, poses with a wild pig...

I think it's sad that he was permitted to use a gun from the age of 5. Are there laws that state how old a person must be to use a gun?

wow i've never seen a boar that big, but i prefer to see it alive than dead

From what I have been told, feral hogs that size cause a lot of damage to plant life/crops and kill/trample many smaller animals, even domesticated pets.

That is sad
V

WOW, that's one big piggy. Well, I'm sorta happy that no one's going to run into it on a dark and stormy night in the woods, and at least the family that shot it is turning it into sausage. 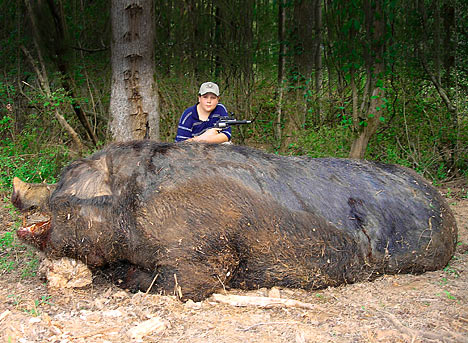 Dad, look what I found. . . Jamison Stone pictured beside the boar. Experts say the picture appears to be genuine

what the heck...are they gonna make sausages out of it? :T

I don't find this nice.

I can't say I'd want to have a run in with it, either, but it's a shame it had to suffer before it died.

I found this really sad too.
These pigs are so rare, I have no idea why any one would want to kill it?
Poor thing was probably out in the woods minding his own business and then these idiots came along and shot him.

Also, I'm a bit confused by this part:
"With the pig finally dead in a creek bed on the 2,500-acre Lost Creek Plantation, a commercial hunting preserve in Delta, trees had to be..."

So was this one of those places that you pay to go and hunt, and are basically guaranteed to come back with something? If so, why are they so surprised that such a large animal was there? I don't get that part.
F

That's disturbing. I can't imagine being shot that many times and suffering for 3 hours trying to get away. I was wondering also, why a 5 year old is allowed to carry a rife and shoot animals. I personally wouldn't want my child to intentionally kill an animal at that age and experience the power of doing so.

Hunting is so barbaric...I understand why it needed to be done ages ago but now it is so unfair...hunters have scopes, camo, etc...how can some consider this a 'sport'?!?!

This is one of the many things I don't get about mankind. They see a rare animal and whats their first instinct? Kill it!

Hunting is so barbaric...I understand why it needed to be done ages ago but now it is so unfair...hunters have scopes, camo, etc...how can some consider this a 'sport'?!?!
Click to expand...

Hunting for sport is just mean. But I'm fine with the concept of hunting for food. Some people still want to catch what they eat. (But without all the unfair advantages. That's the coward's way of hunting. If you need to set out a picnic table with donuts or pasteries just so you can shoot a bear, then you're not man or woman enough to hunt it in the first place.)


I have mixed feelings about this. On the one hand, they are planning on eating it. But on the other hand, just like what another poster said they saw something that rare and the first thought is, let's kill it? Also, it didn't seem like that creature was a direct
threat.
You must log in or register to reply here.
Share:
Reddit Pinterest Tumblr WhatsApp Email Link
Register on TPF! This sidebar then disappears and there are less ads!
Sign Up
Top Bottom