A place with fresh air

The canvas is sturdy so it will hold the shape well. The PM size which is 31cm is a good size and can hold many things. Not hard to get in and out since you've the strap and can wear it on your shoulder. What color did they offer you ?
D

Hi I am so excited for your first purchase for H.
Yes, sometimes it is quite hard to get things in and out of the bag, so I usually place my wallets and handphone at the back zip as well. With weigh, it does stand upright. I like the way it looks and it has a very casual look.

There is a thread for herbag which you could look at.
http://forum.purseblog.com/hermes/hermes-herbag-questions-please-388790.html

So far I'm offered the fuchsia one

I have a black PM one which I got in Tokyo and it has become one of my most-used bags, mainly because of how light it is, which makes it perfect for travelling. You can leave the flap out and just put in the straps, that's how I use it sometimes - it's safe enough since the bag is fairly closed when you do that.

It holds its shape decently though since it's canvas if you put something really heavy in it, I expect it will show so I wouldn't do that. But I put quite a lot of things in it and it's still ok, such as my iPad mini, my wallet, my two phones, some makeup etc.

The casual nature of the bag also makes it less conspicuous than other H bags, which is again in my view a good thing when travelling.

It's also a great bag for dressing up with Twillys just like the Birkin and Kelly.

Am excited for you!

This is the one I was offered 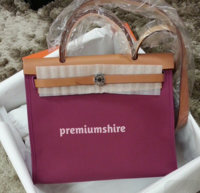 My first Herbag was in black with black leather. I used it a several times, and it's not too difficult to open and close once you get the hang of it. Once you go Hermes it's hard to go back! Enjoy! Welcome to Hermes Addiction! My favorite bags are all Hermes with the exception of a few Chanel!
Reactions: Saffynyc

wow! i'm planning to get the same bag (my first hermes

) i don't know where to start is it easy to get one? i mean can you just go to the hermes store and get it? lol is there a waiting list?

Herbags are usually available at most of the Hermes stores. You can call the stores and they'll tell you if they have any. They ship too. There's an 800 number on their website.

What color do you want?

The raspberry color above is gorgeous.
Reactions: rm_petite

Is it easy to find/buy??

If the price isn't as expensive as other hermes, why don't I see it around as often?!


(Currently thinking about getting one)
A

Is it easy to find/buy??

If the price isn't as expensive as other hermes, why don't I see it around as often?!

Singapore easier to find, about SGD4.8k++.
It is not so popular because it is canvas, difficult to carry for some formal event.
If it's a full leather version, it's going to be very similar to a kelly.
My POV