I can't figure out if this tag and zipper are indicators of a fake on this tie tote? The leather smells luxurious but the glazing looks messy. 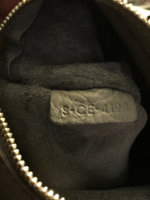 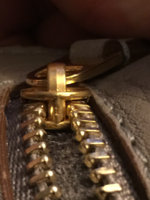 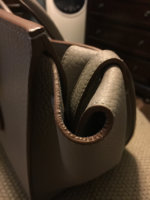 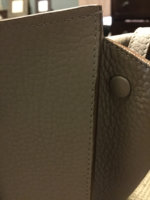 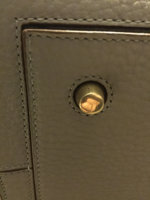 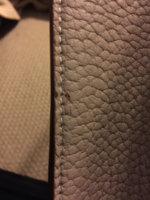 Can someone please tell me if this bag is real or fake?
•••
N

Also seller positioning it as an authentic... with plastic handle wrapping :lolots:
•••
K

darma2011 said:
I can't figure out if this tag and zipper are indicators of a fake on this tie tote? The leather smells luxurious but the glazing looks messy.
Click to expand...

I am no expert but that glazing does look really messy. Definitely doesn't feel like a real one to me

Looks fake to me! when I purchased my Phantom the handles did not come wrapped like that in plastic. dead give away! ALSO, the workmanship on a Celine is impeccable, the work on this pathetic excuse for a Celine is sloppy. FAKE! SHAME!
•••
E

I had a fake celine box bag in the black goatskin nightmare with an ebay seller: luxurysecondsale.

I lost a bid for a celine box back in the black calfskin, and was privately messaged by the seller. I agreed to a fairly high price, only about 20% below the retail price since it was new and purchased it over paypal. She also guaranteed that it was real and that I could do a return if I was dissatisfied in anyway.

When I received the bag, I knew something was off - the smell, the logo stamp, and the stitching to name a few. Oh, and the bag came in an authentic celine SHOE box. When I asked the seller about the bag, she gave me a long winded story about how she got it from someone who only wears birkins. She then offered to refund me a $1200. This was the first obvious clue that it was a fake! I still refused because I do not want a fake, and then she said she'll do a return without going through paypal. When I told her it would be best to do a return through paypal for both our sakes, she went off on me and said that she would never refund me and that it would take months. At that point, I contacted both ebay, paypal and my credit card company. I had to consult the local police department, 2 lawyers, and get an affadavit of the item along with authentication to prove that it was indeed a fake bag. This is time and money I will never get back.

In the end, I was able to receive a refund because of the evidence I provided and paypal's decision. However, she emailed me saying that she accommodated my needs by refunding me and that I should be ashamed because she is a single parent. I was astounded because we would not have had escalate the case into a claim if she had agreed to a clean refund through paypal.

I was initially not going to write a review for this seller, but I saw the exact fake celine goatskin bag that I returned listed on ebay and do not wish anyone else to go through what I did. Looking at her items and other purseforum discussions, she is known for selling other fake bags. Her current ID is luxurysecondsale, but it used to be umkev and evyap_us.

chickenfoot said:
the listing has been removed by eBay

Annarue9 said:
So done with all the fakes on eBay..
Click to expand...

Me too. I've reported this fake Micro several times......the seller has it listed under 2 different ebay IDs too.
Ebay doesn't care that it's fake.

Please do not purchase from this buyer. She sent me a fake bag once and I called her out and she returned my money. I am surprised that she is still selling
https://www.mercari.com/us/item/m57254453445/
•••
A

I reached out to ebay via twitter regarding a bunch of fake listings and they got them removed immediately. How do these people sleep at night?
•••

Hi everyone. I was recently inspired by a youtuber to “thrift” a designer bag, ie rescue an unloved bag at a great price and give it a new life. I have long admired Celine bags and started with a tri colored suede micro luggage bag. My plan is to show her at the start, looking sad and then the steps along the way.

Here she is when we met. Poor dirty girl. 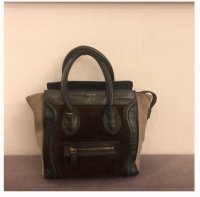 The first thing I did was Lexol wipe the leather parts and, per the instructions on the wipes, follow up with a damp and then a dry cloth. I let her dry while I made dinner, then went after her wings with a suede eraser.

Before of snap side 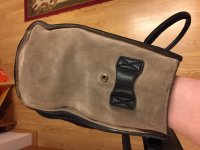 After hours of erasing and using a damp suede eraser and drying over night. Also used Apple conditioner on leather. 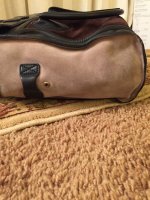 Before of plain side that was better to start 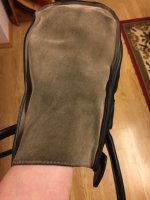 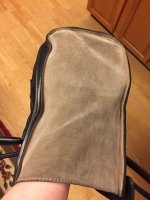 Her should be beige sides aren’t what they were new or what they would be if a previous owner had cleaned, but they are so much better!
Reactions: bellebellebelle19
•••
You must log in or register to reply here.
Register on TPF! This sidebar then disappears and there are less ads!
Sign Up
Top