Part of the Guccis love of New York campaign, an ode to the city where Gucci first opened its doors in 1953 and meant to promote the worlds largest flagship store at 725 Fifth Avenue opening in February is yet another product besides scarves and handbags.
The Gucci Paper Coffee Cup will be distributed to 150 coffee carts between Third and Sixth Avenues from 42nd Street to 59th Street.

Besides that its all about paper, thus not a very lasting material, that Gucci logo all over it makes it so meaningless and meaningful at same time!

Fashions degradable and just as lasting as a paper cup. For the sake of the environment be careful when throwing it away!
Do you really think it was a good idea? Branding Gucci on a paper coffee cup? 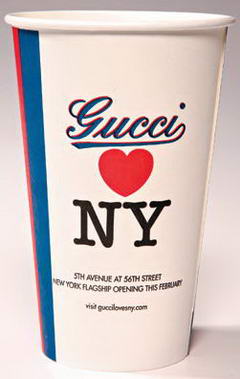 As NY Fashion Week drew to a close the world&#8217;s largest Gucci store was opened at ***** Tower, Fifth Avenue. There to cut the ribbon were Frida Giannini, Gucci&#8217;s creative director, CEO Mark Lee, ***** Tower owner Donald ***** and Gucci&#8217;s North American President Daniella Vitale. The flagship store holds significance as the first Gucci store was opened in New York in 1953. This new store was designed solely by Frida, with no assistance from architects.

To commerate the grand opening the creative team designed these gorgeous &#8220;Gucci Love NY&#8221; bags, which were a huge hit with customers. In coming weeks, coffee drinkers along the streets surrounding the store can show their allegiance to Gucci with their very own &#8220;Gucci Love NY&#8221; branded paper coffee cups. All proceeds go to Playground Partners and Patrons of the Central Park Conservancy (going towards the care and maintenance of the playgrounds in Central Park).
Take a tour of the new store with one lucky invited guest (and new owner of the above bag) Susie from Style Bubble . No Fair.

The title of the article is "The Waiting Game - Be preparted to queue up for the latest it bags." Yeah, if only we could queue up! Such a tease

I'm debating on splurging on one on ebay - it'd really be SOOO cute for spring -- theyre also showing the Prada fairy bag, a RP Vuitton, Chanel & a really adorable Fendi w/a textured looking rainbow on it