(CNN) -- Bea Arthur, the actress best known for her roles as television's "Maude" and the sardonic Dorothy on "The Golden Girls," has died of cancer, a family spokesman said Saturday. 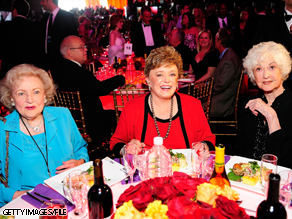 Bea Arthur, right, with "Golden Girls" co-stars Betty White and Rue McClanahan at an awards show in June 2008. She was 86.

Spokesman Dan Watt said that Arthur died Saturday morning at her home in Los Angeles, her family by her side.

She is survived by her sons Matthew and Daniel and grandchildren Kyra and Violet, he said.

No funeral services are currently planned, Watt said, adding that the family asked that donations be made to either the Art Attack Foundation or PETA in lieu of flowers.
•••

This made me so sad. In college, we'd all watch the Golden Girls and loved Bea. She will be missed...
•••

Bea Arthur and the GG's are practically part of my life- I watch too much! God bless her, she was definitely an original!
•••

I second this comment. I still watch whenever it's on.


grace3128 said:
Bea Arthur and the GG's are practically part of my life- I watch too much! God bless her, she was definitely an original!
Click to expand...

She will be sorely missed. I loved Golden Girls even as a teenager. The humor is ageless. First Sophia and now Dorothy.

Thank you for being a friend Bea.
•••

So sad...The Golden Girls is one of my all-time favorite shows. They just don't make funny shows like that any more.

I loved her best as "Maude," she did the role justice.

I adored Maude....I went into labor watching the Golden Girls. You were a beauty Bea. Heaven must be laughing a little more because you're there. RIP!

Oh, how sad! She will be truly missed.

Oh nooooo!!!!!! That is just horrible! I remember growing up watching the Golden Girls, I still watch re-runs when I catch it! What a great show.

My thoughts are with her family. May she RIP.
•••

Oh wow, how sad!! I LOVED golden girls...one of the few TV shows both me as a kid and my parents could watch together.
•••

I was so sad to hear the news. A classic comedian who'll be sorely missed.
•••
C

This is so sad. May she rest in peace.
•••
You must log in or register to reply here.
Register on TPF! This sidebar then disappears and there are less ads!
Sign Up
Top