Six people were injured when a tornado swept through a London street leaving a trail of destruction and damaging about 40 houses.

Rooftops were ripped off and cars were badly damaged as the freak weather hit Kensal Rise in north-west London.
One man suffered a serious head injury and five people were treated at the scene for minor injuries and shock.
Eleven fire crews were called to Chamberlayne Road, which has been cordoned off because of the debris.
Witnesses said there was heavy rain and sleet, then debris flying through the air. 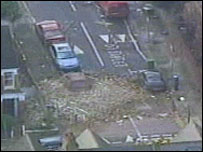 I know this nothing compared to the ones you have in the US but I figured it was worth a mention since it's rare we get one quite so big. It's all over Sky News at the moment and lots of houses are missing walls. I feel sorry for all those people that won't be able to live in their damaged homes at Christmas.

This is terrible ! I was just on the phone with my Mother a few minutes ago, she was telling me," people are just in shock" !


I guess anything is possible any where these days.
•••

I am just outside London, the wind came up from nowhere. I looked out of the window, and the hailstones were so big, they completely covered my car and made it look like a cloud

And as usual from my confined office I heard NOTHING. See, I told everyone I shouldnt work this hard...I miss everything!
•••

This may sound very ignorant, but I didn't realize that tornados could happen outside of the US. I thought they were just out to destroy all of the midwest

One hit just 10 miles south of here in 1998 and absolutly made the entire county a wasteland. It was a HUGE F5 and one of the largest ever recorded. I was so scared when that happened.
•••

awwwwwwwww ... i hope all injured get a full recovery soon

yeah I think only one man actullay went to hospital the rest of the ppl had minor injuries. I live quite close just heard the windy noises..
•••
V

OMG, that's so strange! I've lived in areas all my life that have tornados, and there's so little you can do to protect yourself. Thankfully, no one was killed in London! Best wishes to all of you in that area!

Prada's Meadow said:
This is terrible ! I was just on the phone with my Mother a few minutes ago, she was telling me," people are just in shock" !


I guess anything is possible any where these days.
Click to expand...

Was your mother affected at all? Is she okay?
•••

caitlin1214 said:
Was your mother affected at all? Is she okay?
Click to expand...

Thank God all my family members are fine.