It took about 110 years and some delicate surgery on his most private parts, but Henry -- a lizard-like creature from New Zealand -- is now a dad. 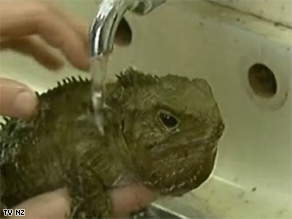 Henry, the oldest tuatara to mate at Southland Museum, enjoys a cold shower in his home in New Zealand.

Henry, a tuatara who, as far as curators at Southland Museum in New Zealand know, had never mated before, hooked up with Mildred, a younger woman of about 80, in March.
In July she laid 11 healthy eggs and, this week, all 11 of them hatched -- the last one on Wednesday.
"Eleven out of eleven," curator Lindsay Hazley said Friday morning. "Bloody brilliant. We had a champagne breakfast to celebrate."
Henry was the oldest tuatara ever to mate at the museum, on New Zealand's South Island, Hazley said.
Tuataras are the only living descendants of an order, related to dinosaurs, that flourished 200 million years ago. They're endangered, only living on a handful of islands in New Zealand, which makes Henry's happy news all the more important to supporters of the species.
But it didn't come easy.
Until about six years ago, Henry was a nasty, irritable fellow who showed no interest in mating and would attack females when they were introduced. Hazley, who has been breeding tuataras for the past 35 years, eventually had to put him in "solitary confinement."
But in 2002, veterinarians discovered that a lump in Henry's nether regions was a cancerous tumor. They removed it and, over the next few years, his mood -- and interest in the ladies -- improved.
Now, Henry lives peacefully with Mildred and two other females. Breeders are hoping he'll show interest in Lucy, who is about the same age as Mildred, later this year. Female tuataras only lay eggs every two or three years, so Mildred likely won't be interested.

Watch a curator take care of the reproducing dinosaur kin »
Henry's newfound libido does have some limits, however. Hazley said Juliet, a youthful 22 year old, appears to be too hot to handle for the centenarian -- who could live to be 200 years old if he stays healthy.
"I think he's a bit shy to mate with such a young woman," Hazley said. "After a bit of experience with Mildred and Lucy, maybe he'll be interested in Juliet next year."
Maxing out at about two-and-a-half feet long, tuataras are much smaller than their ancestors.
The word "tuatara" is derived from a Maori word meaning "spiny back." In Maori legend, they are messengers of Whiro, the god of death and disaster, and they were featured on one side of a New Zealand five-cent coin that was phased out in 2006.
It's been a baby boom at Southland Museum lately. Hazley said another 10 babies were born to another couple recently -- swelling the ranks of the 50 or so tuataras that were already there.

Friday morning, Hazley was working to install a camera so Henry's international fan base can watch him and other tuataras on the Internet. But they shouldn't expect any images of the proud dad playing with his batch of hatchlings.

They're pimping poor Henry out!

Awww he is cute in a scary way LOL

A far cry from the Ocean!

^^ Turtles can live hundreds of years, too.

That's really cute! Congrats to him!

my goodness!!!! that is awesome!

reptiles can live up to about 150 years. some birds can live a very long life too. they are closely related so its no big surprise. (and way to go Henry! Just because there is snow on the roof doesn't mean theres no fire in the chimney or something like that!)
You must log in or register to reply here.
Share:
Reddit Pinterest Tumblr WhatsApp Email Link
Register on TPF! This sidebar then disappears and there are less ads!
Sign Up
Top Bottom