Pedigree dogs are suffering from genetic diseases following years of inbreeding, an investigation has found.
A BBC documentary says they are suffering acute problems because looks are emphasised over health when breeding dogs for shows.
The programme shows spaniels with brains too big for their skulls and boxers suffering from epilepsy.
The Kennel Club says it works tirelessly to improve the health of pedigree dogs.
Pedigree animals make up 75% of the seven million dogs in the UK and cost their owners over £10m in vets' fees each week.

Poor health
The programme, Pedigree Dogs Exposed, says dogs suffering from genetic illness are not prevented from competing in dog shows and have gone on to win "best in breed", despite their poor health.
It says physical traits required by the Kennel Club's breed standards, such as short faces, wrinkling, screw-tails and dwarfism, have inherent health problems.
Other problems occur because of exaggerations bred into dogs by breeders trying to win rosettes, it adds.
The programme shows a prize-winning cavalier King Charles spaniel suffering from syringomyelia, a condition which occurs when a dog's skull is too small for its brain.
t also features boxers suffering from epilepsy, pugs with breathing problems and bulldogs who are unable to mate or give birth unassisted. It says deliberate mating of dogs which are close relatives is common practice and the Kennel Club registers dogs bred from mother-to-son and brother-to-sister matings.

Scientists at Imperial College, London, recently found that pugs in the UK are so inbred that although there are 10,000 of them, it is the equivalent of just 50 distinct individuals.
Steve Jones, professor of genetics at University College London, said: "People are carrying out breeding which would be first of all entirely illegal in humans and secondly is absolutely insane from the point of view of the health of the animals.
"In some breeds they are paying a terrible price in genetic disease."

Breeding practices
RSPCA chief vet Mark Evans was interviewed for the programme.
He said: "The welfare and quality of life of many pedigree dogs is seriously compromised by established breeding practices for appearance, driven primarily by the rules and requirements of competitive dog showing and pedigree dog registration."

But Kennel Club spokeswoman Caroline Kisko said it is "working tirelessly" to help improve the health of pedigree dogs.
"Any dog may be shown but it is up to the judge to decide if it fits the breed standard," she said.
"It is when characteristics become exaggerated that health problems can occur.
"This is something that the Kennel Club does not encourage and actively educates people, including judges, against doing as part of its Fit For Function, Fit For Life campaign." 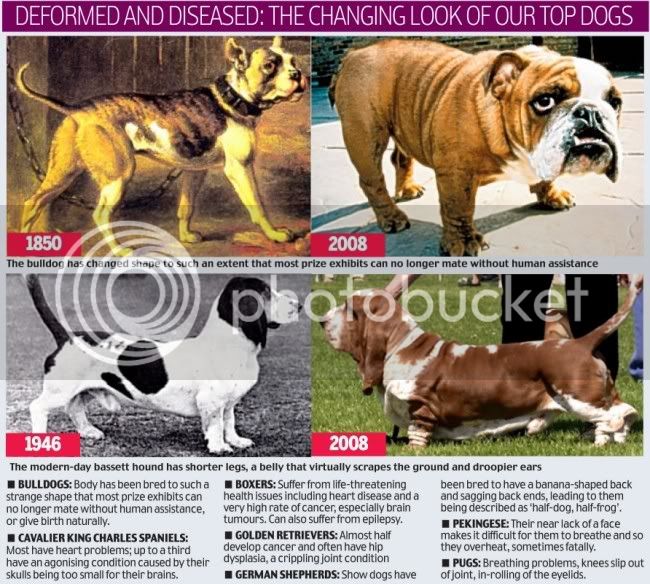 They showed a photo of a pug from 1808, it was barely recognisable and I couldn't help but gasp. I can't find it online but I did find a painting of one from the same year.

This picture is from 1808: Although today&#8217;s Pug is distinguished by an almost flat face, the Pug of 1800 had a distinct muzzle, and in this case cropped ears. 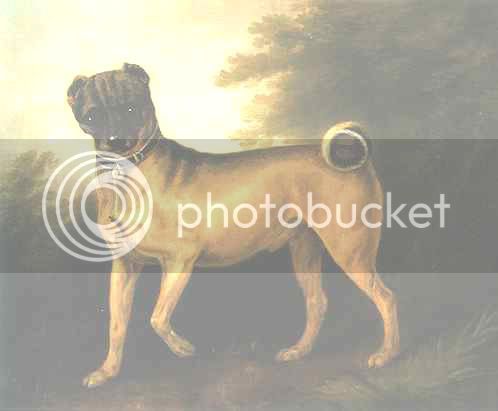 I saw bits of the programme last night, the suffering of the neurological disorder of these dogs almost brought me to tears, so I changed the channel straight away. I must admit it was really interesting tho, hope something is done about this cruel way in breeding pedigree dogs..

A good arguement for getting a "designer dog" from the pound. Win-Win situation! Interesting post...thanks.

Basically humans breed the "mutants" at that time which had the asthetics they liked with other "mutants". So of course problems will follow, which explains all the issues some breeds are prone to have. Obviously it's still done today for differing color variations and sizes.

This is the picture that shocked me the most 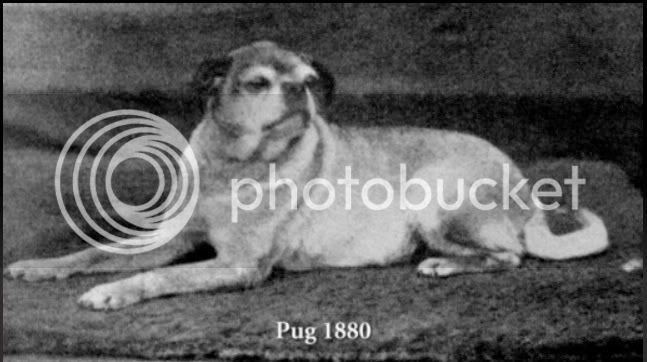 I totally agree that a lot of breeds emphasise on looks over health, and that's where the problems begin.

I don't want to support the people that breed dogs with eyes far too big for their heads, heads too small for their brains or noses that are too short to let the dog breathe properly. I feel for those poor creatures. They will breed these dog as long as people buy them.

I saw a pug breeder here on German TV that doesn't care about the breeding standards and their pugs have a nose and longer legs and a more athletic body type. They look great and have no trouble breathing at all.

The basset in the picture looks pretty extreme, but the breed is very healthy because they are not mass produced.

There was footage of a basset show in the film, and they were all wrinkly and had big ears like that. Their bellies virtually drag on the ground.
The female judge said that the wrinkly skin was desirable and referred to it as "furniture"

I know it's not all pedigree dogs, and that they just picked examples, but I had no idea how much the breed shapes had changed.

I watched this prog, and I was horrified. I had no idea that such close and intentional inbreeding still went on, nor that painful and debilitating conditions are being intentionally perpetuated.

The thing that shocked me most was a breeder of Rhodesian ridgebacks. Apparently the ridge is actually a mild form of spinabifida, and dogs born with no ridge are the healthy ones. The breeder complained about how difficult it was to find a vet who would put down the ridgeless - ie healthy - puppies!

Animals are not things, or possessions, they are lives. We are priviledged to have them share our lives and our homes, and to have them put their trust in us, and we should treat them with love, care and respect. They are not commodities. They deserve so much better than those poor dogs in the program. I am disgusted that organisations such as the Kennel Club condone this sort of behaviour [they made a weak pretense that they don't, but even some of their officials are participating in inbreeding] and that our government has not seen fit to pass legislation to protect these creatures that cannot speak up for themselves.

Describing syringomyelia in cavalier King Charles spaniels, the RSPCA's head vet said something like 'if you caused a dog this much pain by beating it, you would be prosecuted'. So why do we allow this?

PS ILoveMyBug, you should be able to catch the whole prog on BBC iPlayer for free if you watch it within 7 days of showing.

This is on BBC1 now. I cannot believe what i'm seeing. I usually watch Crufts but won't after this. The German Shepherds are shocking, their back legs are half the size of the front and they can barely walk. I can't believe I never noticed this before. It's sickening.
S

I just typed a huge answer to this then lost it!! If it somehow pops up twice please forgive me!!
The programme sickened me beyond belief, I couldn't sleep not only because of the horrendous things I saw but also because of the sensationalist way in which the programme was presented. Yes there are problems in some breeds but by no means all. Yes there are some bad breeders out there but again not all. No all breeds aren't in trouble, not at all, in fact I wouldn't own a breed that had such terrible health problems or one where breeders aren't working to improve the health and temperament of their breed. Dogs at Crufts or any other dog show have to be of good temperament or they would cause havoc! Imagine what a savage dog would do at a show as big as Crufts! All dog breeds have a breed standard and in every standard I've seen it says the dog must be fit for purpose. So a Gundog breed must be fit enough to work all day, a breed with serious health problems couldn't do that. The same applies to Hounds, Terriers, Working and Pastoral breeds, probably Utility breeds, not sure about Toy breeds as I haven't studied them.
The guy from the RSPCA condemned one breed standard for suggesting certain pups were culled and quite right too, what a barbaric thing to do. BUT and it's a big BUT, how can a vet from the RSPCA criticise someone for putting down healthy dogs when that's what he does every day in the guise of 'Training' new recruits. Think that's untrue, check it out.
So before you condemn all pedigree dogs, all dog breeders and dog showing think about it, visit a show and look at how healthy the majority of dogs are.
One last thing: How insulting to both the Jewish people and respectable dog breeders to liken them to Nazis?? If I was a breeder I would be tempted to look into sueing for deformation of character!
S

It was 'furnishings' it's like my dogs beard, they call it 'furnishings' same as the 'feathers' on horses. Strange name for it I know.

^^^I agree comparing them to the Nazi's was sensationalist. However the guy from the Kennel Club didn't have an issue with inbreeding, refusing to accept the scientific research, saying that he knew best...
After watching the whole program, I still feel that the breeders featured do appear to be blind to the health problems and pain they are causing these dogs. Or if they they're not blind, they just don't care. If all Dogs had to be fit for purpose for shows then surely you should have to provide a health certificate to enter a show.

Shelagh12354 said:
One last thing: How insulting to both the Jewish people and respectable dog breeders to liken them to Nazis?? If I was a breeder I would be tempted to look into sueing for deformation of character!
Click to expand...

They can't sue for defamation.

First, you can only do that if a statement is untrue. The point made was that the Nazis tried to follow eugenics, the aim of which is to unnaturally 'improve' the human race, by, for example, selective breeding - and in the case of the Nazis, 'ethnic cleansing'. For obvious reasons doing this in humans is abhored. But what many pedigree breeders are effectively trying to do with dogs is a canine form of eugenics.

[NB Eugenics as a theory doesn't have its roots in Nazism, it's been around a lot longer; the Nazis were just the highest profile proponents of the philosophy thus far. As a result, they are almost always mentioned when eugenics comes up in the popular media.]

Second, even if a statement is untrue (not an issue in this case), under English law you can only sue for defamation if you can prove that the statement in question identifies you as the person defamed. For a group as large as pedigree dog breeders there's no way that would stand up.
You must log in or register to reply here.
Share:
Reddit Pinterest Tumblr WhatsApp Email Link
Register on TPF! This sidebar then disappears and there are less ads!
Sign Up
Top Bottom