Hope this is the right place to post this. It's great!!

Animated characters Wallace and Gromit have been given a new designer wardrobe courtesy of a UK department store.

The pair have swapped their usual attire in a marketing campaign for the opening of a new Harvey Nichols department store in Bristol.
Pictures to promote the opening show that Wallace has ditched his beloved green tank top for a Dolce & Gabbana shirt and an Alexander McQueen jacket.
Gromit is also shown wearing a designer scarf and sunglasses.
Wallace and Gromit creator Nick Park said: "Wallace usually shops at Tank Top Man so this is a big transformation for him.
"He isn't exactly known for his up-to-the-minute fashion sense but I know he's feeling pleased with himself - it's great to see him looking so chic and stylish.
"I caught him looking at his reflection in a shop front window on West Wallaby Street the other day, he says he looks and feels 10 years younger. Gromit reckons it'll be moisturiser next."
Another picture shows Wallace's love interest Lady Tottington wearing a black Alexander McQueen dress, red Christian Louboutin shoes and a Zagliani bag.
Aardman Animations, which created Wallace and Gromit as well as much-loved Creature Comforts characters and Morph, is based in Bristol.
Wallace and Gromit have appeared in four films, three of which have won Oscars. 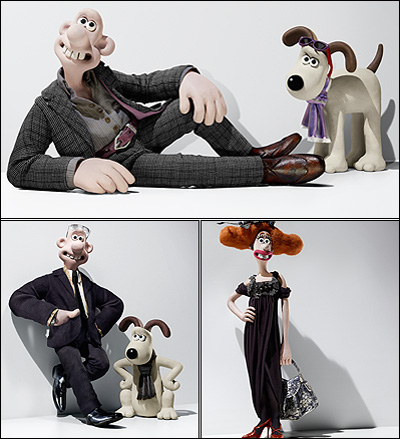 cake is much better

This made me laugh

I think I want to watch the movie now.

It was a holiday here yesterday and they showed them all on one of the cable channels, such good fun

if i was a rich girl

From US to Liverpool

I love wallace and gromit lol! too cute! thanks for sharing
D

Hahahhaha, that is fabulous!
B

This is just TOO cute!

Cracking Threads Gromit!! Feel so good, I might even try Brie instead of Wensleydale!

Alidoll said:
Cracking Threads Gromit!! Feel so good, I might even try Brie instead of Wensleydale!

How cute! We love Wallace & Gromit in our house!

I LOVE Wallace and Gromit!!! And I love this campaign! I even have a backpack that's the shape of the penguin with the glove on his head. hahaha.