I purchased an item last Sunday (shipped Monday) from a seller in Ca who sent the item with expedited shipping.

It is close to 7 days now & when I look at tracking info all it states is: in transit to the next facility..

Are any of you experience delays with merchandise going cross country ?
Reactions: CarryOn2020

Yes! (Not specifically with USPS), but with Canada Post. I had an order from Montreal to Toronto back in May, (normal delivery time is 5 days). It took Canada Post 30 days for delivery. After many back-and-forth emails, both the merchant and Canada Post says the delay was due to the COVID-19 Pandemic.

I really feel for you if the delay is due to the pandemic and being it a cross country delivery. All I can say is hang in there and good luck.
L

The seller & I are being patient as challenging as it is.
Thanks

Yes, I shipped out something Priority Mail from Chicago to South Carolina on Monday June 29, and it just arrived yesterday. I know COVID has slowed things down and then I assume July 4th caused an additional huge backup. I was nervous the whole time that it was lost, since it was a handmade quilt I sent! But, it arrived all in one piece.
Reactions: RT1
L

No question there are delays!
Reactions: RT1

Yes, with USPS, UPS, and FedEx. Packages are arriving a day or two later than the estimated date. A while ago there was a banner at the top of the USPS homepage stating that they have limited transportation (???!) and to expect delays. I find UPS smartpost to be delayed a couple days when UPS hands off the package to USPS. I also had an appliance repairman tell me that FedEx and UPS were holding onto packages for several days before delivering them, so he switched to OnTrac, which I think is just as bad but he lives near a hub and swears it's quicker for him to receive deliveries.
Reactions: RT1

makeupbyomar said:
both the merchant and Canada Post says the delay was due to the COVID-19 Pandemic.
Click to expand...

IMO, the pandemic is a scapegoat.

While I've seen a slightly longer time to deliver (an extra day to an extra week), for the most part, I think those blaming the pandemic a making excuses. I've sold and shipped quite a few items between March and now and can count on one hand (or less) the number of delivery problems and slow delivery.

I've also seen tracking with fewer intermediate scans but again, items are getting to their destinations in close to the same amount of time as pre-pandemic.

In fact, I'm going to be posting a complaint on the pet peeve thread where another company continually blames the pandemic and DHL.
Reactions: GemsBerry

I ran across this article after posting in this thread. This makes more sense - it's not just the pandemic, USPS is having major issues:

Bags and swag are my kryp-tonite

Place of Worship: House of Chanel

Yes I read about this, apparently there's an intentional slowdown directive.
Reactions: bag-princess, OriginalBalenciaga, RT1 and 2 others
L

Update: The package never arrived, seller suggested I file an INR & the seller has already reimbursed me.
Seller has also filed a claim with USPS & not certain if seller will receive full/partial reimbursement
for the value of the item .
It was just being sent with delivery & signature confirmation.
I don't know if seller insured the item for the full value or if seller just took the customary coverage
but in either event seller might be taking a loss & that is not what I expected nor did the seller as
I wanted the item & it this is not a feel good situation on either end..
Reactions: 880

Yes. I had my dogs medicine sent to me and it should have been here by now - I called and was told to wait it out, the post office is slow right now. But we're talking three cities away so.... it shouldn't be 5 days late?!
Reactions: RT1

Does this have anything to do with voting?
My package was due Friday. Still nothing.
Reactions: OriginalBalenciaga

CarryOn2020 said:
Does this have anything to do with voting?
My package was due Friday. Still nothing.
Click to expand...

It has to do with Covid. (Was "voting" an autocorrect mistake!?)

And this probably has something to do with the slowdown too:

I purchased an item on the 4th of July, paid immediately.
this is what it says on the EBay screen.
I contacted the seller and he never bother to acknowledge my message.
It is a large jewelry business and I am a repeat customer...
They are still listing.
What would you do? 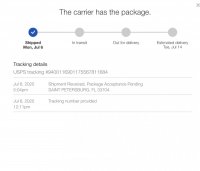 limom said:
I purchased an item on the 4th of July, paid immediately.
this is what it says on the EBay screen.
I contacted the seller and he never bother to acknowledge my message.
It is a large jewelry business and I am a repeat customer...
They are still listing.
What would you do?
View attachment 4794253
Click to expand...

It never makes me feel comfortable when a seller doesn't respond to a concern.
If it is a large business someone should have access to messages, after all it appears they
are listing & shipping..
USPS is slow as many have seen. Is this package going cross country as that could be the delay
You can attempt to reach out to the seller again, wait til the end of the week, or you can file an INR.. it is your call
Reactions: RT1 and limom
You must log in or register to reply here.
Share:
Reddit Pinterest Tumblr WhatsApp Email Link
Register on TPF! This sidebar then disappears and there are less ads!
Sign Up
Top Bottom