Hope he learned his lesson and doesnt do it a 3rd time. 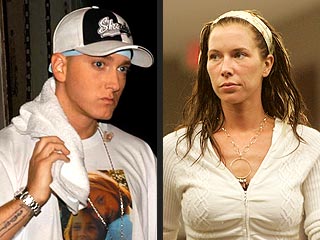 Eminem and Kimberley Mathers are divorced  again, according to the Detroit Free Press.

The couple, who have been married to each other twice, reached an out-of-court settlement during a hearing at Macomb County Circuit Court on Tuesday. The pair agreed to share custody of their daughter, Hailie Jade Scott, who turns 11 on Christmas Day, the newspaper reports.

It's not clear if Kim was granted the financial support and attorney fees she'd been seeking from the rapper, whose real name is Marshall Bruce Mathers III.

The couple "conducted themselves with dignity and respect," Chief Judge Antonio P. Viviano told Free Press. Eminem declined to comment after the hearing.

In addition to Hailie Jade, the couple adopted Kim's niece Alaina, 12. Kim also has a daughter, Whitney from a previous relationship.
•••

Wow, I wonder how much she got from the divorce settlement this time around.

Now we can finally go out!!!

Sunshine said:
Now we can finally go out!!!

I feel bad for their daughter

She looked fantastic in their wedding photo. Every other photo she looks like crap.

i feel bad for their daughter too
•••

He is soooooooooo hot!!!
•••
You must log in or register to reply here.
Register on TPF! This sidebar then disappears and there are less ads!
Sign Up
Top