Elisabeth Hasselbeck Has a Boy!!! 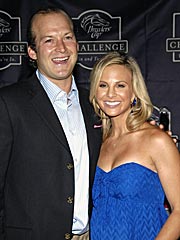 Tim and Elisabeth Hasselbeck are the proud new parents of a boy, ABC.com reports.

The View cohost gave birth to a 7-lb. 15-oz. boy Friday morning at an Arizona hospital. Hasselbeck plans to call into the show Monday to announce her son's name.

The baby joins big sister Grace, who is 2.

"We're thrilled he arrived safely," Tim Hasselbeck said in a statement. "Both mom and son are happy and healthy."

The View cohost, 30, and her NFL quarterback husband, 29, moved to Arizona in October, after he signed a contract with the Arizona Cardinals.

The move brought early maternity leave for Elisabeth, who has pledged to return to the ABC morning talk show. When she had Grace, she took a total of six weeks off.

Hasselbeck first announced this pregnancy on her show in April.

Aw congrats to her. I didn't realize she was that far along already!

thats wonderful!!! and she will probably be home taking care of baby, which will give me enough time to watch the View while she is gone..seeing that her opinions are ridiculous and outlandish!

awww! Congrats to her family!
L

with those parents, and especially that mother, that kid doesn't stand a chance at being even moderately intelligent.

that's a really disgusting comment. . . .
what if someone says that about you?
This isn't a good time to slam an innocent child

sputnik said:
with those parents, and especially that mother, that kid doesn't stand a chance at being even moderately intelligent.
Click to expand...

Aww, congrats to them! I bet he's gorgeous!

sputnik said:
with those parents, and especially that mother, that kid doesn't stand a chance at being even moderately intelligent.
Click to expand...

How wonderful!! I can't wait to see pics of her baby! Congrats to her!


sputnik said:
with those parents, and especially that mother, that kid doesn't stand a chance at being even moderately intelligent.
Click to expand...

Congrats on a healthy baby!
S

Boy there are some mean people on this purse forum. I guess what goes around comes around.