This year has been one of the most challenging years professionally in my life. A colleague and I have completely re-vamped how our company approaches federal business development. For the past six months it included 60-80 hour weeks--blood, sweat and tears.

Last Friday, we won our first HUGE contract. It validated our process, methodology and hard work.

So what's a girl to do. Though this was a Super Bowl type win, I was NOT going to Disney World.

If I'm posting on this thread, you know where I went.

Saturday morning, I went to my store early and told them about the big win. And told them I wanted to see if they had a special bag. I also told them I had a relatively big birthday coming up later in the month. Hence, one of the "b"s for my thread title.

They first showed me a bag, but it was too similar to another bag in my collection, though I seriously considered it because it was a bag that looked great with blue jeans. I had a feeling they had something else for me. The SM was in and they re-checked and this bag was shown to me and hands down it was the winner.

So here's some pics.

Congratulations on your success!!

I KNOW this is going to be good!!

I meant to do that.

Right Smack in the Middle

You might think you know what it is, but she's got a little surprise.

She sure as heck surprised me!!! My SA said I was going to keel over when I saw her--and I nearly did!!!

This bag works equally well with jeans as well as a LBD.

Oooo, I am waiting for your live review of your gorgeous K&#8230;

You match with my shoes, congrats, haha. She's a beauty. 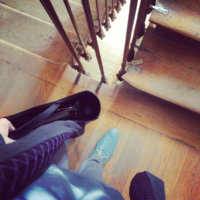 Woooooow! That is gorgeous and definitely a rare piece. Congratulations!

Oh, one more thing. She has a covered lock.

She's my three b Kelly.

etoupebirkin said:
She sure as heck surprised me!!! My SA said I was going to keel over when I saw her--and I nearly did!!!

This bag works equally well with jeans as well as a LBD.
Click to expand...

WOW!!! This is sooooo special!! Congratulations and enjoy your beautiful Kelly in the best of health!!