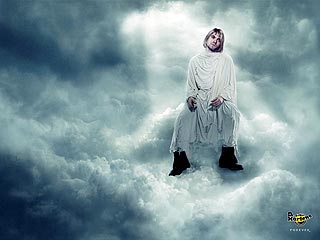 "We are really, really, really sorry," Dr. Martens CEO David Suddens tells PEOPLE. "We do think that it is offensive. We made a mistake. My message to Courtney Love is: This is something we shouldn't have been doing."

On Wednesday, Love lashed out at the company via her publicist. "Courtney had no idea this was taking place and would never have approved such a use," her rep told PEOPLE. "She thinks it's outrageous that a company is allowed to commercially gain from such a despicable use of her husband's picture."

The ad shows Cobain wearing black Dr. Martens boots, draped in an angelic robe and sitting on a cloud. In the corner, it reads: "Dr. Martens. Forever." The ad also includes similar images of the late Sid Vicious and Joey Ramone.

Suddens tells PEOPLE the ad appeared in a single UK publication and was intended for a one-time use only, though it got greater attention with it showed up on Web sites this week. Suddens says it was a mistake to have allowed even that limited use of the ad.

"I wasn't even aware of it," Suddens says. "I was still unaware until [Wednesday]. When I found out what happened, I fired [the agency]."

(The ad agency that created the effort, Saatchi & Saatchi London, released a statement Thursday posted on the Web site The Daily Swarm. "We believe the ads are edgy but not offensive," executive creative director Kate Stanners says in the statement. "We regret that the controversy has led Dr. Martens to terminate the contract with Saatchi & Saatchi.")

Suddens says that Dr. Martens also takes responsibility. "We never should have done that," he says. "It's not a campaign we want to be associated with."

I posted this in wardrobe because its about an ad, not really discussing the shoes itself.

I don't find it at all offensive because these iconic people wore DM's. It's certainly wrong they didn't get permission to use his image though
J

I dont find it offensive either..courtney is a jackass IMO.

She's probably just pissed she didn't make money out of it......
J

^ probably, how else can she continue to fund her drug addictions...

I would find it offensive, how would you feel if your dead husband or family member ended up in a advert without your say so, i think it would be a shock!
J

I love how the CEO blames the agency. The company always has the final say. Whatever, I'm sure Saatchi isn't hurting for clients (its one of the biggest agencies in the world...yes, i work in the ad industry).

I'm torn about this. In a certain way, the images of famous people DO become public property. Yes, of course it should be done legally and all, but the fact that he is dead and his image was used should not in itself be shocking or offensive.

And I agree with Jayne07. The CEO sounds like the ad agency ran the ad without Dr. Martens knowing about it! That's not the way it works at all. The company paid the ad agency and had to approve the final product. And Dr. Marten submits the ads to publications and pays to run them. There is no way he didn't know!

Whether you find it offensive or not, it seems tacky in my opinion to attempt to capitalize on dead rock star anti-heroes like Sid Vicious, Kurt Cobain, Joe Strummer, and Joey Ramone.

I think it's tacky when it happens to James Dean and Johnny Cash too, even though they seemed more comfortable with fame and commercialization in their respective careers. I'm glad the ad agency
who concocted this was let go but ultimately, Dr. Martens approved of the campaign and had it go to print. I can't believe no execs said, "hmm this might actually produce some bad press."
You must log in or register to reply here.
Share:
Reddit Pinterest Tumblr WhatsApp Email Link
Register on TPF! This sidebar then disappears and there are less ads!
Sign Up
Top Bottom