The Cruise circuit has the fashion set circumnavigating the globe—Paris and Milan last week and Kyoto next, with New York and Florence near the end of the month. Today’s hop off point, courtesy of Christian Dior, was the Upper Las Virgenes Canyon Open Space Preserve in Calabasas, California, a super remote mountaintop where MASH*, Little House on the Prairie, and Gone With the Wind were filmed. Calabasas is also the town that Kanye West made fashion famous with his most recent Yeezy collection. There were no Kardashians in the crowd, but Rihanna, Solange Knowles, and Miranda Kerr all made the trek.

Why California? Dior’s creative director Maria Grazia Chiuri candidly admitted that the location was chosen before her arrival at the house—a production with 800 local and out of town guests and honest to goodness hot air balloons doesn’t just come off over night. Presented with the California location, Chiuri said she went to the archives, where she came across the house founder’s Lascaux collection of 1951, inspired by the ancient cave paintings discovered in southwestern France a decade earlier. “For me, I found it close to L.A.,” she said of Monsieur Dior’s designs. “You think L.A. and you think Hollywood, Oscars, the red carpet, but honestly I feel people love this place because you feel in contact with the natural elements.” Indeed, one local advised against straying too far from the show’s tents—there be mountain lions in the Preserve. Rattlesnakes too.

Chiuri reproduced the Lascaux sketches as a silk and raffia jacquard used on New Look skirts and ponchos, as a print on a softer cotton shirtwaist dress, and as fur intarsias. The danger with such a motif is its literalness, accented here by the Dior Sauvage men’s fragrance branding on those balloons. But she conjured more than just spirit animals. Chief among her other interests this season were a Georgia O’Keeffe exhibition she saw at the Brooklyn Museum and a collaboration with Vicki Noble, the creator of the Motherpeace feminist tarot deck. From her start at Dior, Chiuri has linked magic with femininity and feminism. Here she went direct to the source, printing t-shirts with Noble’s tarot illustrations or painting them on the back of leather Perfectos. Today’s activation had not yet begun when Chiuri announced she was dreaming about one in which Noble does tarot readings in the brand’s Paris store. That human touch is the charm of Chiuri’s Dior. And, of course, Monsieur Dior was a lover of the tarot. As for O’Keeffe, milliner Stephen Jones’s parson’s hats were dead ringers for the topper the artist wore, and a double-face cashmere coat in black with white arabesques evoked her famous ram’s head paintings. Coats in the waisted, midi-length silhouette so associated with O’Keeffe were among the show’s subtlest and chicest pieces. The bead-embroidered easy denim looks numbered among the other highlights, along with several ethereal prairie dresses.

A rhapsody in blue, and nothing but blue, the Fall collection Chiuri presented in Paris last March erred repetitive. What with the color and pattern and the spectacular sunset, tonight’s show had more verve. In an interview Chiuri stressed the importance of forward momentum and lightness. “If you feel too much the history, you get stuck in a box.” But that’s not her only challenge. Having left her former design partner at Valentino, she has the daunting task of remaking one of fashion’s major houses while simultaneously redefining her own USP. Is there a better place to do that than in the land of reinvention?
Click to expand...

I absolutely loved it. Maria's Dior is so human, the Dior lady is at once down to earth and in touch with reality. She's feminine, but not dainty. She's stylish, but not a slave to fashion. She's warm and inviting.
Reactions: KBT39 and lvlove707

Yes!! I really liked it too! The references to the archive Lascaux collection from 1951 was a great idea.
Reactions: KBT39, lvlove707, averagejoe and 1 other person

Yoshi1296 said:
Yes!! I really liked it too! The references to the archive Lascaux collection from 1951 was a great idea.
Click to expand...

YES! I'd love to se the original pieces from that collection.
Reactions: Yoshi1296

Honestly I would wear every single piece in this collection! So stunning

The return of the brown monogram!

Some amazing bags in this collection. Will post pictures when they surface on the internet.
Reactions: JazzyMac, lvlove707, hightea_xx and 1 other person 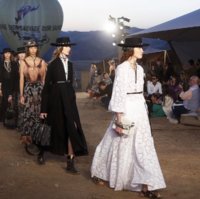 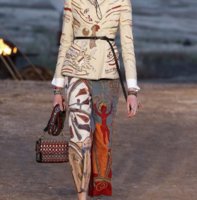 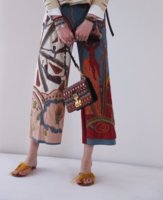 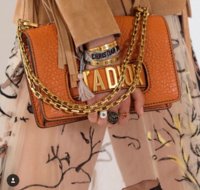 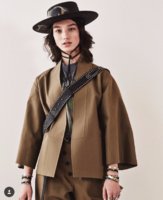 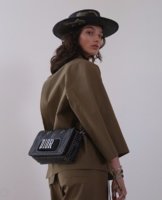 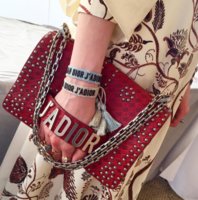 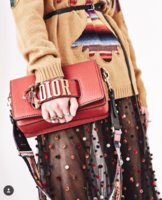 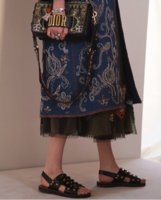 Thanks for sharing these pics!!!

Lacquered hardware on the Dio(r)evolution bag 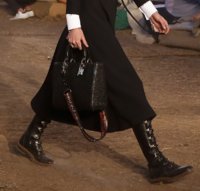 Thus appears to le in the Lascaux frieze,

Wisdom, with eyes full of tears.

The discovery of the Lascaux cave, in 1940, had a profound influence on the artists of the time. For Georges Bataille, it represented the dawn of the human race. The power with which animals are depicted (deer, horses, oxen) takes us back to the infancy of mankind and its relationship to nature, as well as the invention of art. In 1951, Christian Dior appropriated these rock paintings, making a print from them for his Ovale line, a form with allusions to primitive female depictions such as the Willendorf Venus. It is this wild and ancient femininity, linked to the magic of the earth, that guided Maria Grazia Chiuri, Artistic Director of the Dior women's collections, throughout the creation of her first cruise collection for the House.

Thus a feminine representation takes shape, bringing into the present this shamanic intuition, this wild, almost bestial spirit of which Clarissa Pinkola Estés writes in one of the designer’s favorite books: Women Who Run with the Wolves.

Maria Grazia Chiuri is constantly seeking new ways to embrace and explore the Dior heritage. And it is the prehistoric wolves which emerge from the Lascaux cave to take their place on extraordinary silk jacquards where the ocher, almost gold in color, contrasts with blacks. Female handprints, reinterpretations of the original forms, become magnificent sequined embroideries in earthy shades.

Maria Grazia Chiuri has appropriated the savoir-faire of the Dior ateliers, reinventing it to tell her story in ideal forms. A story that alters proportions and lengths to correspond to the contemporary landscape, in which sport mixes with haute couture, where tradition becomes ornamental abstraction and where materials see their status changed.

The celebration of instinct leads her to female figures who have chosen to isolate themselves in the desert to better understand the deepest and darkest recesses of the self. Such is the image of an artist like Georgia O'Keeffe, emerging from the sands of New Mexico. A hieratic figure occupied with collecting carcasses. This is what Vicki Noble writes in Shakti Woman: Feeling Our Fire, Healing Our World: "I want to know myself from my sacred center, and in that space I want to know and touch others.” Maria Grazia Chiuri has also brought a pop interpretation to her use of the tarots given a high-octane feminist reinvention by Vicki Noble in order to give new life to Monsieur Dior’s beloved art of divination. The idea that a person’s smell is the expression of their soul can be found in the feminine take on an emblematic perfume such as Eau Sauvage. The intangible imprint of this wild, erratic figure restores woman once again to her place at the center of the world.
Click to expand... 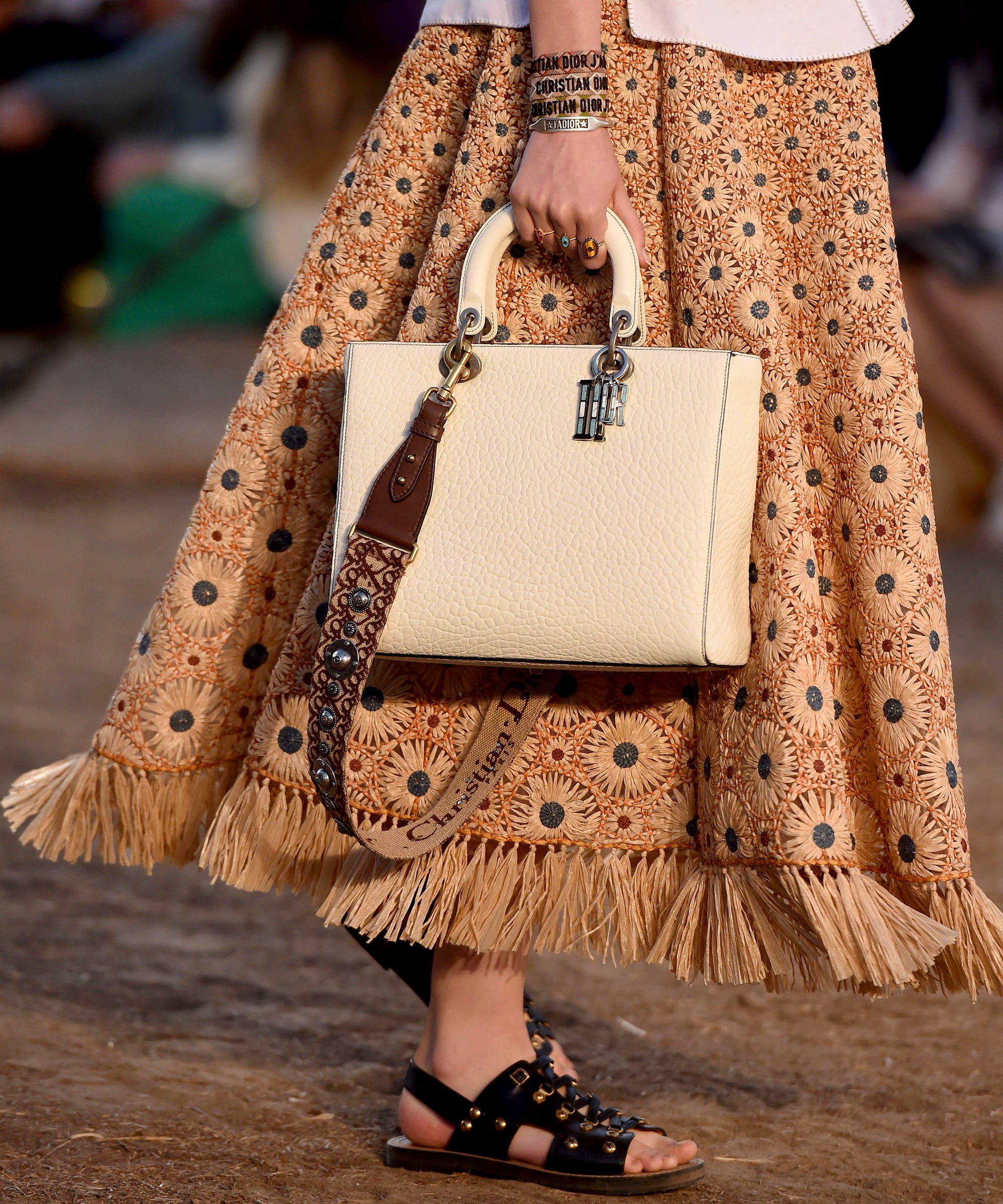