Okay so my LV recieved a Damier Griet. I didn't actually consider this bag until my SA pulled it out to show me. She told me it was limited and won't be out for very long.

OKAY, So at first I was contemplating between the The black neo cabby and the Blue Marina, and when I saw the blue marina I was a bit scared about the light color of it. So I decided on the Neo cabby.

And then to make it even worse she showed me the Griet, I was thinking about getting the Trevi PM for a while now, but because it's permanent, I keep pushing it down my list. So now after seeing the Griet, I'm having a hard decision on whether or not to get the Neo Cabby, the Trevi OR just wait on those and get the Griet first because it's limited. Its hard because the Griet and the Neo Cabby are completely different styles. Because I wanted to get it on PSN (Holts on Nov 14) I had to pre-purchase it, or else they would sell the Griet to someone else. I'm having the hardest time deciding what to get. I still have a couple of days to decide which one I want.

The Griet is HUGE! It's got two sections and a zip centre divider. The handles are long enough to fit over the shoulder but the bag itself is a bit too wide to carry over the shoulder, and the handles don't help there either! It's actually quite big. What should I do?!?!?

Please help me out!! 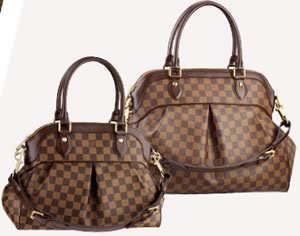 (pictures borrowed from the forum!!)

I'm tempted to say the Griet...

EDIT: Not because it's limited but I prefer it over the Trevi... I don't like bags with normal handles and an extra shoulder strap.

I was thinking that too. I had this brief moment where I went to the Chanel boutique and looked at the Caviar pouchette, and i was so tempted to go that way!! But I think i'll wait on that, it is beautiful though! But the price increase is painful!

Personally, I would go with the Griet...BUT GET WHAT YOU LOVE! It shouldn't make a difference if something is LE...either you just love it or you don't!

oooh this will be my very first post here in the LV thread and I like the griet! whether or not it's a LE...i still like the style of the griet better than the trevi. I do love the neo cabby tho!!!

hahaha welcome to the LV forum, where I stalk daily but never actually post anything!!

It seems like everyone is pointing to the Griet

I would choose the Griet.

i agree with everyone else here, go for the griet

Griet is pretty, but I have tried it on, and it seems VERY heavy. You can't carry it on the shoulder, I think its more of a hand-held. I like the versatility of the Trevi myself. Good luck deciding !

Griet! The others can come later.

Griet. It has such a nice shape. If it's limited, I would definitely get it first and wait to get the others. Once they stop making it, it'll be next to impossible to get one.
You must log in or register to reply here.
Share:
Reddit Pinterest Tumblr WhatsApp Email Link
Register on TPF! This sidebar then disappears and there are less ads!
Sign Up
Top Bottom