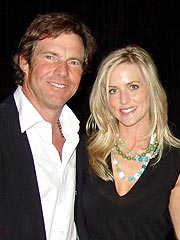 The newborn twins of Dennis Quaid and wife Kimberly were hospitalized Tuesday in Los Angeles, reportedly in intensive care.

The actor's rep, Cara Tripicchio, declined to give a reason, but said in a statement: "Dennis and Kimberly appreciate everyone's thoughts and prayers and hope they can maintain their privacy at this difficult time."

Thomas Boone and Zoe Grace, who were born on Nov. 8, were accidentally given a major dose of an anti-coagulant, TMZ.com reports.

The babies are in stable condition in the neo-natal intensive care unit at a Los Angeles hospital, TMZ reports.

The twins were born via a gestational carrier  a woman who carries another couple's baby conceived by the parents' own egg and sperm.

I posted this already, feel free to update that thread