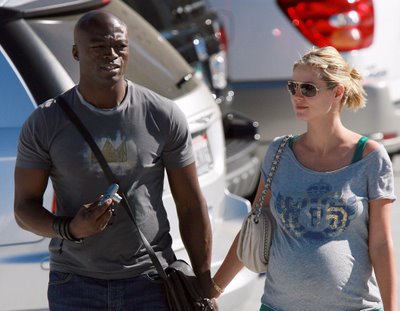 Supermodel Heidi Klum and Seal welcomed the birth of a son named Johan, according to the supermodel's website.


'JOHAN
TO OUR CHILDREN, A BROTHER
TO OUR PARENTS, A GRANDSON
TO MY WIFE AND I, A SON
TO OUR FAMiLY, A BLESSING
JOHAN RILEY FYODOR TAIWO SAMUEL
WAS BORN AN 11/22/06 AT 17:01 in L.A.
WEIGHING 8 LBS 11 OUNCES.
HE IS HEALTHY, BEAUTIFUL AND LOOKS JUST LIKE HIS MOTHER.​


SEAL'​
Congrats to the happy parents and siblings!

ahhhh that is fabulous news. Do they have two girls at the moment, or a boy and a girl already?

so happy for them

Heidi Klum, 33, and Seal, 43,welcomed their third child and second son yesterday at 5.01pm in Los Angeles. Johan Riley Fyodor Taiwo Samuel weighed 8 pounds, 11 ounces. Their two other children are Leni, 2 1/2 and Henry, 14 months. Seal posted the following message on Heidi's official website:
To our children, a brother
To our parents, a grandson
To my wife and I, a son
To our family, a blessing.

He is healthy, beautiful and looks just like his mother.

aww thats soo cute!! I love them, and their family.. hmm I wonder what the baby looks like!!

Wow!! Now that's a NAME! Congrats to them both. I'm sure he's a beautiful baby!!

Congrats to them - they are a happy couple with great kids.
M

damn that baby has a long name, but congrats to them and their family.

aww... so happy for them! i'd like to know the explanation for the lengthy name. i really liked how they named their first son, even with a long name, it holds special meaning for their family.

I think they are a great couple!!!

I'm so happy for them!

Update: We've learned the meanings of Johan's names, thanks to RTL. Johan is a Nordic and German version of the name Johannes, a Hebrew name that means. "The Lord is gracious." Riley is traditionally Irish in background and means "small stream or creek," Fyodor is Russian and means "God's gift," and Taiwo means "to smell/taste the world" in Yoruba. In twin births in Africa (Seal is English with a Nigerian background) the first twin in a set is often called or nicknamed Taiwo.
RTL also confirms that Leni's name is simply 'Leni Klum' - she has no middle name, unlike her brothers' multiple ones!
Also, RTL reports that Johan's birth was Heidi's first Cesarean section. No reason was given, but we assume it was not elective due to Heidi's quote from a year ago after Henry's birth - "Henry's birth was easier than Leni's, because I knew what to expect. I would never consider an elective c-section for a few reasons - because I like the experience of a vaginal birth, and also I am scared to have my abdomen cut open!"
Seal has also posted a new blog - it reads, "Mama and baby are doing great. She is so good at having babies, I feel so blessed and fortunate to have a wife like her, they are both so beautiful. Leni and Henryboy were both so excited seeing him yesterday. It's amazing how much he looks like Leni when she was born. I mean, he is completely different looking from Henryboy so as Lauren put it, he will surely look more like HK as he grows. He is so precious and really hasn't been that noisy on his first night spent on earth. Wow! what an amazing experience to have been a part of.

Thanks for all the kind wishes that you guys keep sending us. You're all the best fans anyone could ever have..... I really mean that."