13 minutes ago BY TMZ STAFF 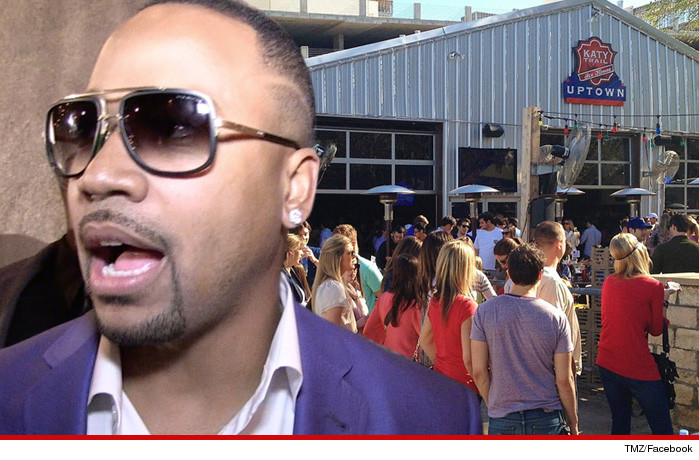 Columbus Short celebrated July 4th by getting in trouble with the law for the 4th time in 4 months.

Short was at the Katy Trail Ice House -- a popular bar in Dallas -- for around 4 hours and was drinking a lot. An eyewitness says Columbus got up and it looked like he was leaving without paying the tab. A security guard started talking to him and Columbus started screaming.

We're told Columbus accused the guard of racism, but the guard fired back, he was also black. A scuffle between the 2 ensued.

We're told several off duty Dallas cops -- who work at the bar on weekends -- broke up the fight but the fired "Scandal" star was still hotter than fish grease.

We're told Columbus started screaming at the cops and tried attacking them. As one source at the bar put it, "He was like a dog with a bone who wouldn't let it go."

The cops then did what cops do -- they arrested Short, but not for assault ... for public intoxication.

Short was taken to jail. 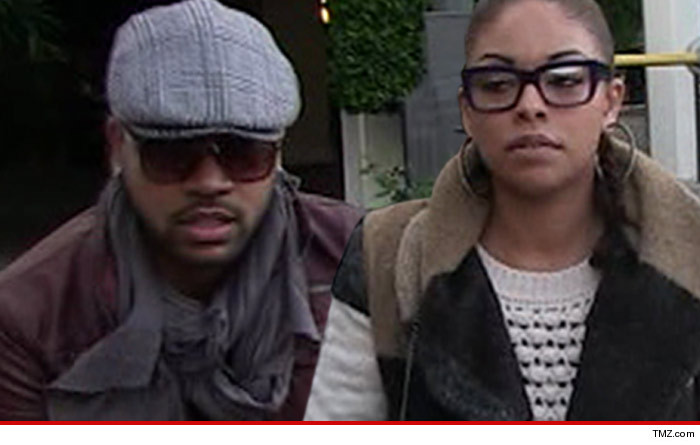 Ex-"Scandal" star Columbus Short is playing a dangerous and illegal game of cat and mouse ... repeatedly contacting his estranged wife in violation of a court order ... so claims his ex.

Short's lawyer could have asked to hold Columbus in contempt, but instead the attorney asked the judge to make the temporary order permanent. The judge is considering what to do ... in the meantime the restraining order was extended to July 30th.

TMZ broke the story ... Tanee got the TRO -- and filed for divorce -- after Short allegedly put a knife to her throat and threatened murder/suicide.

She's also accused Short of breaking into the house and ransacking the joint. 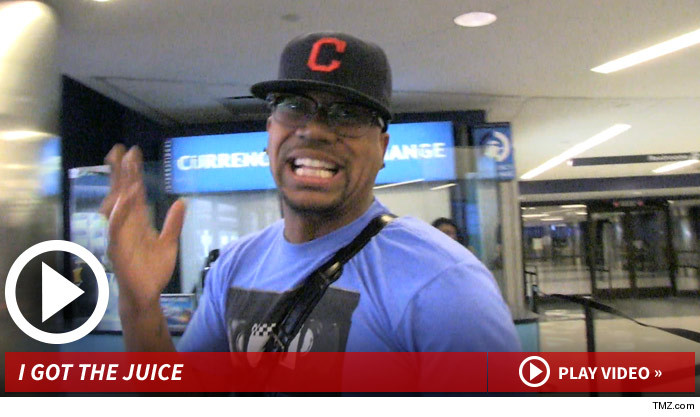 When you've recently been accused of domestic violence like Columbus Short -- and you're also facing charges for allegedly beating up a guy -- cracking an O.J. Simpson joke is ill-advised ... but he did it anyway.

We got Short at LAX on Sunday ... and asked him about his Monday court dates for both pending cases. Short dropped an incredibly dated O.J. trial reference in response and when we asked an O.J. follow-up question ... he dropped a second domestic violence-related answer.

As we reported, the ex "Scandal" star is trying to become a stand-up comedian. 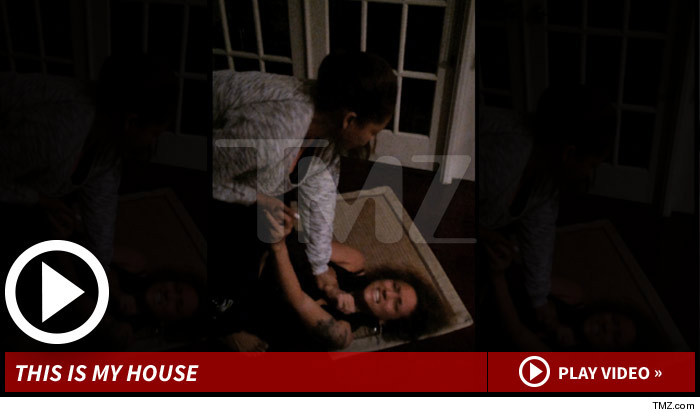 Columbus Short shot this video to show his estranged wife was the violent one in this relationship ... and one thing's for sure -- she can be a real fighter.

Here's the back story ... Columbus was arrested for domestic violence for an incident at his house February 18 ... accused of beating his wife Tanee McCall (the woman on top in the video).

The next day -- after Columbus bailed out of jail -- he asked his friend Tilly Key to come to his house to pick him up. We're told Tanee went ballistic when she saw Tilly in the house, and that's when Tanee attacked.

Tilly wanted TMZ to post the video, to show Tanee is violent and even threatened her life.

TMZ broke the story ... Tanee has filed for divorce and got a protective order forcing Columbus out of the house.

Isn't there already a Columbus Short thread? And not only the Black celebrities are getting in trouble with the law, but it seems as if theirs are THE ONLY ONES IN THIS FORUM with title of this nature.

Why can HIS thread be by his first name Like the OTHER threads???

Well I searched first, obviously. But not all threads are name only, look around, notably LaBouef LaBusted, which is pretty funny, lol! Also Brittny Gastineau's thread. It's not a black thing. Tamar Braxton's thread title is a little out of date, as is Tom Brady and Gisele's. Tracee Ellis Ross' says she's lovely, which is true but isn't her name only, plus plenty that say "married" as if it just happened.
But there's not a rule about titles AFAIK, no one else has ever complained either.


If I missed his thread, feel free to point it out.

Ladybug09 said:
Isn't there already a Columbus Short thread? And not only the Black celebrities are getting in trouble with the law, but it seems as if theirs are THE ONLY ONES IN THIS FORUM with title of this nature.

Why can HIS thread be by his first name Like the OTHER threads???

Are you sure you're not confusing the Columbus Short thread with the SCANDAL thread? There was a lot of talk and discussion in the TV & movies forum about his arrest and subsequent firing from the show.

44 minutes ago BY TMZ STAFF 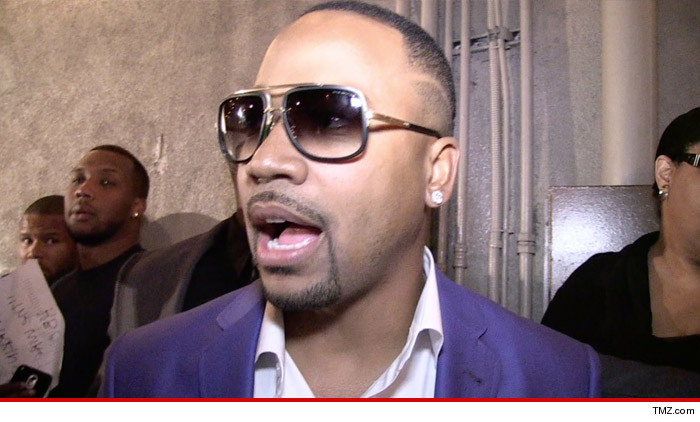 Columbus Short just got a new set of cuffs .... he was arrested and taken into custody in a Van Nuys courtroom.

Short has been a wanted man since last month when he failed to appear in his criminal domestic violence case. Short chose to go to Barbados instead. The judge issued an arrest warrant and set bail at $40K.

That same judge became enraged earlier this week when Short skipped another hearing ... he was still vacationing in Barbados. The judge upped the bail to $500K.

The former "Scandal" star showed up this AM to face the music and was immediately arrested.

Now get this ... Short had another hearing today in a criminal case involving a bar fight, but he didn't show because he was in custody. So the judge in the bar fight case issued a SECOND arrest warrant and set bail at $250K.

I have no idea who he is

Me neither, lol! But he kept coming up in my feeds so I figured people might.

He's an actor that was on scandal. I hadn't really heard of him before the show.

He's also a dancer, he used to dance for Britney & he was in a movie called "Stomp the yard".

Goodness, wish these 2 would stay married and keep their abuse confined to just themselves then at least.

And what's a cervical sprain!? 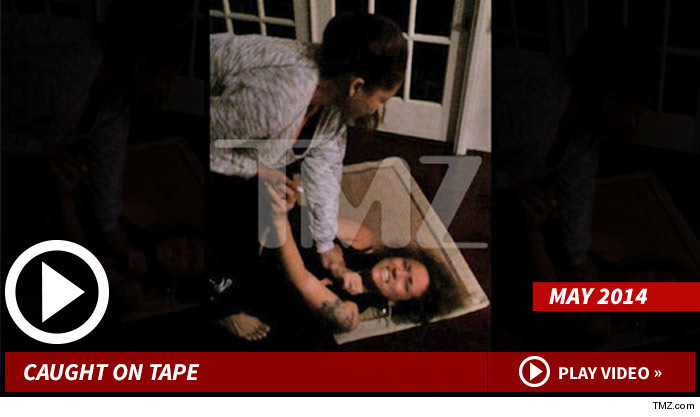 Columbus Short's soon-to-be ex-wife has been criminally charged with beating up a woman whom she thought was having an affair with the former "Scandal" star.

It sounds like one of the worst marriages ever ... Columbus gets arrested, bails out, and his friend Tilly Key goes to pick him up from his home the next day. Columbus' wife, Tanee McCall-Short, sees Tilly inside the house and starts pounding on her.

Rather than breaking up the fight, Columbus videotaped it.

The L.A. City attorney was impressed with the clip, and charged Tanee with battery.

Tilly claims she suffered a concussion, a cervical sprain, multiple contusions, a lumbar strain, and a lumbar sprain.

Where the grass is greener

~Fabulousity~ said:
I have no idea who he is
Click to expand...

I don't watch Scandal, he was a character on this show before his antics.
You must log in or register to reply here.
Share:
Reddit Pinterest Tumblr WhatsApp Email Link
Register on TPF! This sidebar then disappears and there are less ads!
Sign Up
Top Bottom