CoachFreak, have you seen this? 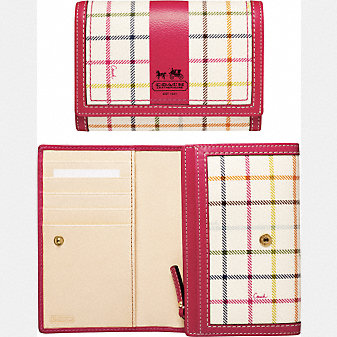 Since you are in complete lust with tattersall lol
http://japan.coach.com/content/product.aspx?product_no=10528&category_id=73

I haven't gotten any of the new Tattersall accessories, but thanks for thinking of me. I actually just got another wristlet in the old pattern I am about to post. I might have to look into getting the wallet you have above!

A SA just showed me that pic in the store on Sat. IMO it's a bit close in the price to the zip around wallet, which is much nicer. But it's a great option for those who have the smaller tote.
B

I think someone on here has that but I can't remember who?! I love the clutch wallets!

Does anyone own this? How many CCs fit in it? It seems much smaller than my french purse, but it is getting cuter to me now that all my stuff is in the satchel.
N

I Love You Mommy

That wallet is super cute.

off topic, but wow, coachfreak, I looove that pink bag in your avatar! What a gorgeous shade!

I have the HS version of this wallet, it is $198. Let me find my pics of it so you can see the inside.

This is my favorite style wallet.

Okay not my Heritage Stripe version, but this is the inside:

Five credit card slots on the flap, plus three pockets inside, as well as a pocket on the front of the zipper compartment and one on the back.

coachfreak said:
Does anyone own this? How many CCs fit in it? It seems much smaller than my french purse, but it is getting cuter to me now that all my stuff is in the satchel.
Click to expand...


You know what...when the SA showed this to me and this other woman in the store (we both had the tattersall bags, but hers was a small tote), she said this was a SMALL wallet. Well, someone asked me about this last night, and I looked at the dimensions. From what I can tell, this is not THAT small. I mean it's smaller than the large zip around, but bigger than the multifunctional clutch I used to have. I sold both I had, so I can't attach a pic, but in any event...I would check the dimensions to see if this is the right size. I really don't think it's as tiny as I was initially led to believe, but might be just enough to allow for more space than the zip around. I have the same french purse (tattersall) as you, and I think this one is larger...or at least might be longer from what I gather! 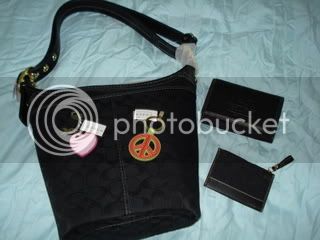 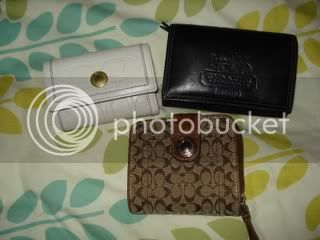 Ok, oopsy, I always forget I have stuff. I have a teal wallet that I think is probably the same wallet as this tattersall. Here's a really quick comparison pic with the tattersall french purse.