After ordering my chloe edith flats in red, I have been eyeing people's flats around town...

I happened to notice an SA at J Crew wearing these beauties, so I had to ask her about them since I could swear they were the same as my edith flats:

But she told me she got them at Target!?! huH? So I checked the Target site, and lo and behold I found these babies: 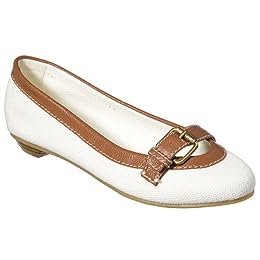 Then I saw them in person at my local target and they really look like the edith flats...

Anyway, just thought I would post this interesting and strange discovery. Not sure how I feel about the target version of these shoes...

This is the generic version of Chloe. Close, very close in appearance! This is what my sister does with athletic shoes for Walmart etc. Copies them as exact as she legally can! No different than generic drugs KWIM?

I saw a black "bay" at kmart the other day. It scared me!

This is too close for comfort! I wonder if the buckle is brass or silver tone?! Well...I guess we can assume no leather sole & the heel is prob not real wood but still! I love your red ones!! & yes, very sobering susieserb!

Yes I had worked in the shoe business for years and here is the story: the same shoes in ANY price range can be made in cheaper materials and sold to off price stores BY THE SAME COMPANY. This is very prevalent in women's fashion footwear where it is notoriously difficult to press charges or pinpoint where the style orginated. The designer version might not be the original first-one-with-the-look either! Lots of shoe companies "buy" newly designed styles from what they call "Modalistas" in Italy and Spain. The prices are quite high for these prototypes. Lots of companies can buy the same prototype and issue it their particular way. Brands like Steve Madden, Mia, Natualizer, Via Spiga, etc sell the same styles to Macy's or Payless. They'll put their brand name on the higher priced version and let Payless put whatever they want on the ones for their stores. The shoe companies may merely cheapen the materials in production. All are cut by the same dies. Ironic - isn't it? Athletic shoe companies like Nike are more apt to protect their brand designs since the logos are prominently displayed. A copy cat company would get sued out the wazoo if they put any semblance of a Nike swoosh on their version. But what is there to indicate a dress flat is a Chloe when many houses have put very similar versions out there - almost simultaneously? Christian Louboutin at least has patented his red soles. But an international patent is hard to protect.

I will bet that the Chloe quality is really apparent, though. My boots are absolutely top notch superb.

divnata, this is fascinating! for some reason I find the fashion business and issues like this amazingly interesting! how do you copyright creativity!??!?! Maybe I should have gone into patent law....

I think you are surely right about the quality. My chloe flats are really well made! far surpassing my other shoes...

Its funny tho b/c now that I have "caught on" to this issue, I was looking at some of my other shoes and noticed a pair of liz claiborne loafers I have that look a heck of a lot like chloe's. Now I see why I liked them soo much....it was their inner Chloe inspiration! but now I feel a bit weird about them too...

div, thx for sharing your knowledge on this subject!

Chiapet it's so funny you mentioned Patent Law. If you are desiring to become a lawyer this is the one specialty to be in. With world market dominance, patents of every nature are being challenged today. Whether it's the fashion industry, computer parts or pharmaceutical medications some manufacturer out there, with a desire to make $$$$$$$, will challenge your patent or circumvent it's uniqueness?? In retrospect companies can lose huge profits!! I'm seeing it in my industry and the outcome can be almost devastating.

Div that was an intressting read. I would personally get nervous wearing shoes that were not leather and not sure if super cheap models will be leather. We got one store here were you can get 3 shoes for the price of 2 but it looks plastic in commercial leaflets so I never visted the shop

That red sole from Loubutin I have seen on other shoes. Not seen in real life but seen in a fashion magazine and they called it a discount version of a Loubutin that Nicole Richie was wearing and even the sole was red on it but the brand logo was completly diffrent. If they have patent on the sole I am guessing the company who made that could get in trouble. On the other hand the logo was really bright on the sole so no way one can misstake it for a Lobutin.

I'm still waiting for net-a-porter to mark down their Candbury flats - theyve been 30%off forever!!