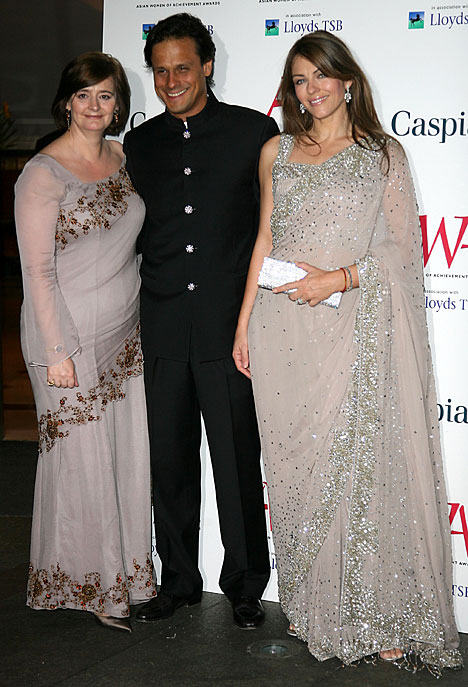 The event was to honour Britain's most dynamic Asian women and there was only one way for the special guests to dress up.

Liz Hurley and Cherie Blair looked resplendent in Indian dress last night as they got into the spirit of the Asian Women of Achievement Awards in London. Miss Hurley, 41, is well-practised in wearing Indian outfits, following her marriage to Arun Nayar earlier this year

Yesterday she wore a traditional figure-flattering sequinned sari for the event at the Hilton Hotel in Park Lane.
Mrs Blair, 52, opted for a similar colour scheme, but wore a sheer embroidered outfit more loosely based on a sari.
She presented an award to Lucky Dhillon, from Middlesex, who received the Media Professional of the Year award for her work on Sunrise Radio, the first UK independent radio station specifically for the Asian community. Mrs Blair told the ceremony she was "delighted" to be a patron of the awards, and said all the women should be "extremely proud of their achievements".

love elizabeth's dress. she's gorgeous!!
thanks for the pics

Liz looks fantastic! What a dress!

love elizabeth's dress. she's gorgeous!!
thanks for the pics
Click to expand...

Thanks for the pics.
Liz looks gorgeous as always.
J

I love their dresses. Thank you for sharing.

I think they look great!!

Poor Cherie, it would be my worst nightmare to stand next to la hurley and have my photo's taken

, very few are going to look great next to her, and the look on her face says get it over with asap

liz's dress is stunning tho, I completely agree

I think they both look wonderful. Both outfits are so flattering and I have no problem with non-South Asians wearing South Asian dress.

non Indian? thats not even proper english. and she spelled "hideous" wrong. should have been banned for bad grammar alone.

Cheri and Elizabeth both look beautiful. One of my best friends is Indian, and I can't wait to wear a sari(as a bridesmaid) when she gets married. They are ethereal, gorgeous pieces of clothing period, regardless of the race of the person who wears them.