Mariah Carey married much-older record producer Tommy Mottola in 1993 when she was just 23. Ther relationship was fraught with problems, though, and the couple divorced five years later.

Country singer Leann Rimes was going through difficulties with her father when she met and married husband Dean Sheremet in 2002. She was 19 and he was 21.

Olivia Wilde, who played Marissa Cooper's lesbian lover on The O.C., and currently appears on House, was only 19 when she married her husband, Tao Ruspoli. The couple have been married for five years.

Jessica Simpson was only 22 when she married Nick Lachey, who was 29 at the time of their nuptials. The pair documented their every move on the MTV show Newlyweds: Nick and Jessica, which may have contributed to their eventual split in 2005

​
Britney Spears was married twice in the same year when she was 23! In 2004 she spent 55 hours wed to childhood friend Jason Alexander and later that year married Kevin Federline. The Spears/Federline union lasted a tumultuous two years before desolving in 2006.

Home Alone star Macaulay Culkin and Rachel Miner were both just 17 when they married in 1998. Not surprisingly, their young love didn't last and they split up just two years later.

Reese Witherspoon was 23 and Ryan Philippe 24 when they married in 1999. The couple stuck it out for seven years before splitting up in 2006. It was rumored that Philippe's infidelities were the cause of the breakup.

​
In 1996 at the age of 21, Angelina Jolie married her Hackers co-star Jonny Lee Miller. The pair divorced a short four years later and Angie went on to marry Billy Bob Thornton. That marriage also failed &#8212; and now she&#8217;s one half of Brangelina.

and most of them are divorced now, lol.

Wow. I had no idea Leanne got married that young.

Kobe & Vanessa Bryant
LA Lakers' star, Kobe Bryant was 22 years old when he dribbled off the court and into a wedding chapel with 19 year-old artist, Vanessa in 2001. Vanessa was still in high school when she started dating Kobe Bryant. 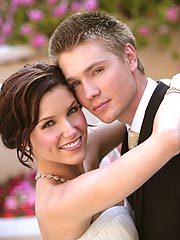 Sopranos star Jamie-Lynn Sigler married her agent A.J. DiScala in July 2003. They divorced in 2005. Sigler was 22 at the time of the marriage; DiScala was 32.

sadly most do end up in divorce.

Brandy never married him. There was big controversy about it?