karebear87 said:
Introducing my boys Taylor Swift (grey) and Max Martin (black) both adopted when they were 3-4 weeks old (they were abandoned in a shoe box outside the vets). Just so happened we found a lost cat on our property and we took it in to see if they could scan the microchip and contact the owners.

aww...if you've hand raised them from when they were that tiny, they must be very tame and docile
Reactions: weezer and pukasonqo
•••
K

sdkitty said:
aww...if you've hand raised them from when they were that tiny, they must be very tame and docile
Click to expand...

Yes, normally tame and docile and thankfully normally sleep through the night like us! ☺️
Reactions: sdkitty
•••

It's really hot here in California. Heathcliff is trying to stay cool. 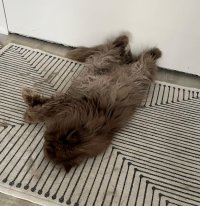 yes, it is hot and he has all that fur. pretty kitty
Reactions: lorihmatthews
•••

Foster kitten Natasha has already found her forever home. She will have a Golden Retriever companion to terrorize. Happy Life Beautiful Girl! 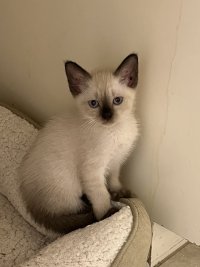 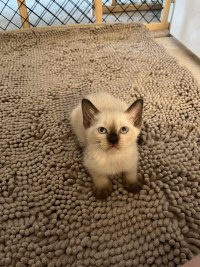 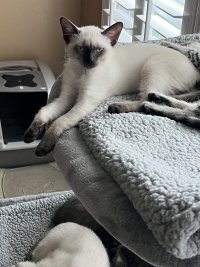 That is exciting, @sgj99 ! She is very pretty.
Reactions: pukasonqo
•••

I don't believe I have missed this forum until now...
I have been following the bag posts..
but how could I have not searched for cats until now...

I am from India.

My boy is Chicko. He is 10+ years old. I have found him on 21st January in 2012, on a rainy evening, alone, middle of main road here locally. I picked him up and brought him at my room. That was the first time he came in my life and my life changed for ever.

Before I found him, I was mourning the death of my very first, one and only cat-then, he left me on 3rd December 2011, was lying on my lap, I held his paws at that time.

After that the long one and half months seemed way longer because I was without him and honestly I tried to love other cats locally who roam here in streets, but it felt like I was cheating on my baby by trying to give "his most deserved love" to other unknown kitties and while I knew it is all in my head only, I just could not love another cat or I was never accepted by any other cat by then... time passed.. after one and half months long, I discovered a tiny kitten, so lively, so loud(as per his voice then) that did not care about anything.. ignoring the dangers of being on the road all by himself.. he could not even stand on his own properly then, his legs were trembling for being just a baby, his eyes must have been open for 1 or 2 days.. I could not get to know what had happened to him that he had to come to the road all by himself at night.. what about his mother!! his other possible siblings!!!. no other cat was nearby as per my knowledge.. if I could have found his mom, I would have returned him to her.. but would my heart had allowed it.. I don't know.

Chicko came and only the first night he was timid, for being at a new place. but from the second day, he made himself at home. he started to do so much mischiefs that I cannot write all. He waited for me to wake up in the morning and started his days by running with me from one room to another from the very next day.. wherever I went, Chicko was there, bathroom included..

Then I thought I have to name him something, I can't call him baby indefinitely.. there came his name, after searching for pet names on internet, I chose this name. but then also, I was not sure of keeping him with me, I tried to let him be outside, but he chose not to.. he kept coming back to me.. how long could I not love a baby cat who keeps coming back to me.

I used to spend time at my first cat's grave by that time and for this, I used to get laughed at, for mourning over a cat's death.. people everywhere mocked me saying that I was mad, I lost my mind, other people don't mourn this much for a family member either, that much I was mourning for just a cat..

I had to tolerate everything because I knew my baby was a pure soul who understood my love for him, and that was enough for me, I don't need every other person to understand my love for my baby, he was with me for long 11 years.. he came to me with his sibling who later disappeared, assuming he died without my knowledge.

After my very first cat's death, I decided I would not keep any more cats, most importantly I would not love any more cat because their passing left my heart empty. I would feed the street cats, pet them, but would not keep any more cat with me at my room.. but Chicko came from nowhere and won my heart. That baby was so demanding, that I had to fulfill his needs, foods, sleep, taking him with me everywhere.. and somehow I fell in love with him. I used to tell my very first cat by going to his grave that, please not to misunderstand me, I love him, I have not forgotten him by keeping Chicko with me.

After Chicko came in my life, everything changed. I started getting so many baby cats from here and there and they started all living with me. My life kind of felt full with them. They lived, I tried to do their treatments when they fell ill or had something happened to them, then after some years/months they stopped coming for food, and without my wish I had to accept that they have gone.

Now also I have some cats with me, along with Chicko and also, got some babies recently.

Here is a photo of my baby Chicko. 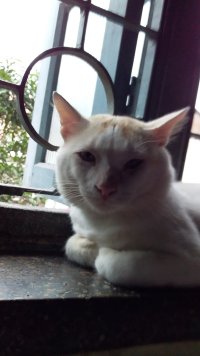 our little girl like the cat condo....mostly uses the top perch....for years I didn't have one of these - due to space constraints, not having a place I wanted to look at it. and not knowing if the cats would use it.
Glad she likes it. Our boy uses the scratching part of it but doesn't get up on it very often 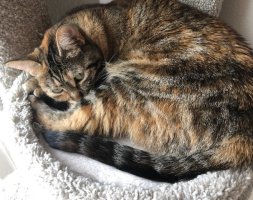 Pls meet Tobias “ Toby” Pierce —- my DD cat she adopted when she was in 2nd year in college, he’s now 4, sweet and very loud talker. 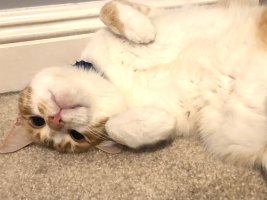 sdkitty said:
adorable...I love when they talk to us
Click to expand...

He would talk so loud we thought he’s on the bottom of the stairs but nope he’s on the top just calling us —- maybe.
Reactions: sdkitty
•••

I have a new little litter of foster babies. These 3 are 3-4 weeks old. They’re still on a bottle but have teeth growing so I think in a week-week and 1/2 I can transition them to mush (canned food with formula mixed into it). They were rescued from the undercarriage of a motor home in a RV park. 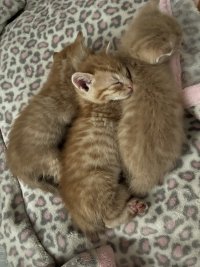 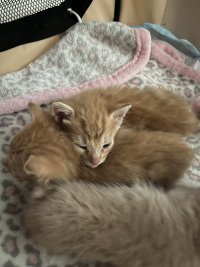 sgj99 said:
I have a new little litter of foster babies. These 3 are 3-4 weeks old. They’re still on a bottle but have teeth growing so I think in a week-week and 1/2 I can transition them to mush (canned food with formula mixed into it). They were rescued from the undercarriage of a motor home in a RV park.

aww....little orange tabbies....do you know if they're all boys? used to be most were but when I was looking to adopt a couple of years ago I learned there are more orange females than there used to be