I'm struggling and need some advice... I'm torn between the Kooba Ginger and the Kooba Sienna... Any recommendations... This will be my first Kooba purchase and I'm not sure what to get...

What is the quality like? Which one is larger? Any advice would be wonderful!!!

Thanks everyone and Happy Thanksgiving!!!

I personally selected the Ginger because I loved the way it looked on Vanessa M. from MTV. She has the leather version of the purse, but in person, I just thought the quality of the leather was low and went with the suede. However, the suede is a bit of a pain for me right now. Overall, I think it is a much better looking bag than the Sienna -- for some reason that style looks so cheap to me.

I just bought the Kooba Sienna in Bourbon because I wanted the color. I like the Ginger but I wanted the longer shoulder strap of the Sienna. I think the Ginger looks a tad dressier. Maybe because most of the leathers used on the Ginger are not the distressed leather but smoother.
I love all Koobas practically but passed on by the Ginger's and Carla's and was thrilled when I got the Maria (the little sister of the Carla). Just the right size. I have the Maria in Terraine. Maybe it would interest you if you wanted a longer strap. 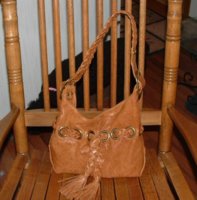 Thanks for the great advice everyone!!! IAmMe - you're AWESOME!!! Thank you SO much for giving me the links to Saks.com, I didn't even check over there and can't believe the great deal!!!

Between those two, I like the ginger. I do have the sienna in desert (light camel color) and it was a great S/S bag but I think the ginger is more versatile because it's not as casual a style.

Let us know what you decide!!

Personally I have Kooba Sienna and LOVE the quality

I have the Kooba Sienna in Espresso and she is TDF! The leather is so thick and amazing and she looks fab on the shoulder!

The Ginger looks lovely too! You can't go wrong with either - get both!

Sure love my Koobas! I have the Sienna in Moss and it's a wonderful bag that is casual yet still attractive. I also have the Nisha in Toffee and the Renee...which is my favorite so far. The leather is really soft, is comfortable to carry and holds an enormous amount of stuff. But I'm looking forward to adding to my collection and will be interested to hear your opinion.. whether you choose a Sienna or a Ginger.

Have the Sienna in Ivory and just got it out again for the summer (in Australia), love the leather, so soft and it holds loads

I have the Sienna in Ivory and have been really happy w/ it. The leather is wonderful, it can hold a ton. But, it is a little bit heavy. I do like the Ginger. let us know what you decide. good luck.
K

I had two Siennas but I sold them because they were just too heavy for me. This is something to keep in mind. The Ginger is large and holds a ton and isn't as heavy. Both bags come with different types of leather, depending on the color and the season that it came out. Kooba leather varies greatly from model to model, year to year. I've had complete strangers comment on my black Ginger, and I've had two people tell me it is the prettiest handbag they've ever seen, which is quite a compliment! I do not like the Chestnut Ginger because the leather is just not that striking like it is in black or Terraine. I do not recommend the recent Siennas that are embossed or super bumpy (fall 06) because the leather is too stiff and not as pretty. If you're choosing between the Sienna and the Ginger, I would recommend the Ginger since the Sienna style may get dated a little faster because its been out a little longer. Good luck and enjoy whichever one you decide on!
Christi

Kooba Ginger! Plus it's on sale right now at multiple stores, NM for one. I think it's a far more fresh bag than the Sienna. Good luck!!!
You must log in or register to reply here.
Share:
Reddit Pinterest Tumblr WhatsApp Email Link
Register on TPF! This sidebar then disappears and there are less ads!
Sign Up
Top Bottom