It is a scene that, in its day, set pulses racing in cinemas  Burt Lancaster and Deborah Kerr kissing on a Hawaiian beach in the 1953 film From Here To Eternity.
And, in a passionate clinch worthy of any James Bond film, Pierce Brosnan amply demonstrated last week that anything Burt could do, he could do, too.
His amorous roll in the sand with wife Keely Shaye Smith on the idyllic Hawaiian island of Kauai left onlookers in no doubt about their feelings for each other. 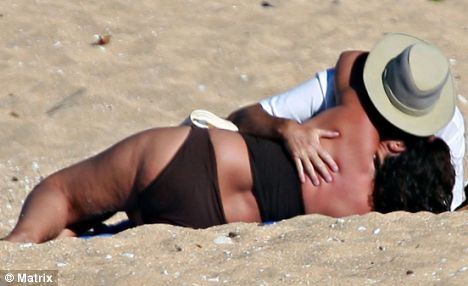 Pierce Brosnan and wife Keely on a beach in Hawaii and, below, Burt Lancaster and Deborah Kerr's famous 1953 clinch 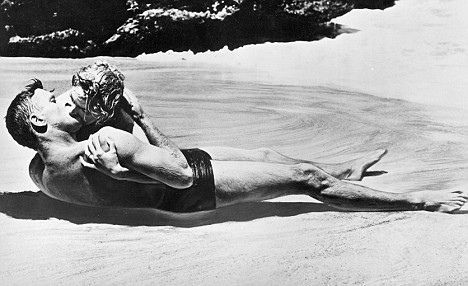 Brosnan  the 55-year-old former Bond actor whose latest role is in Mamma Mia!, the film version of the hit musical  wore shorts, a shirt and a sunhat as he embraced his wife, who was wearing a black two-piece swimming costume.
He then posed against a fallen tree, with what looked like a script in his hands, pulling a variety of silly faces to entertain Keely and their friends.
With such an openly public display of affection, the actor proved he couldnt care less about catty remarks made about Ms Shaye Smiths voluptuous figure on some celebrity websites in recent weeks.
Brosnan married the American TV presenter in 2001 and they have two sons, Dylan and Paris. His first wife, Cassandra Harris, died in 1991. 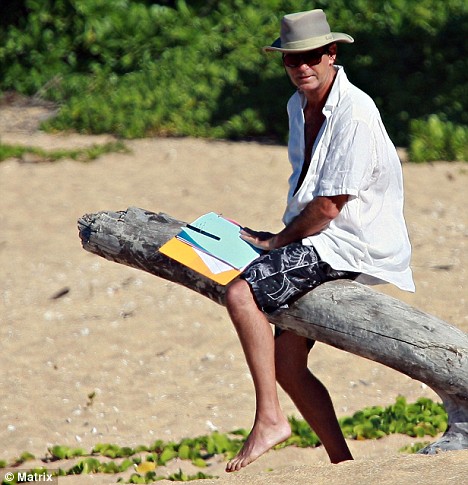 The couple sit and read alone after their dramatic embrace 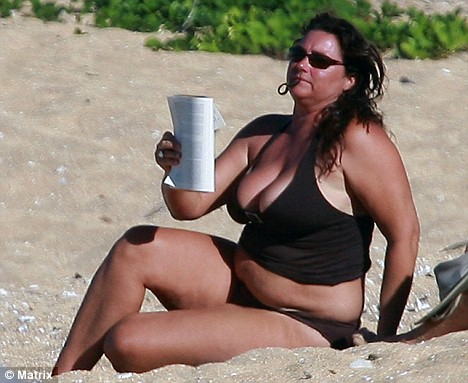 Ms Shaye Smith, 44, quite happily flaunts her body in figure-hugging outfits. She once told Vogue magazine: &#8216;I never shy away from colours or my curves. I never hide in baggy clothing.&#8217;
The couple divide their time between Florida and Hawaii, and Brosnan has spoken of his love for the simple life on Kauai.
&#8216;I live in the most beautiful part of the world now,&#8217; he said.

^ Good for her. Don't be ashamed of your body!

I would love to live in Hawaii!

I love him, and his wife seems so nice, so real.

I miss Hawaii. I'm in the middle of Texas for college. =(

Here she is when she was thinner:

Ok, please don't beat me for this but ... well.... she's kinda let herself go a bit?! I'm really pleased that they are still in love and she accepts her new figure - but Wow! She was so toned and beautiful!!

Juicy said:
Ok, please don't beat me for this but ... well.... she's kinda let herself go a bit?! I'm really pleased that they are still in love and she accepts her new figure - but Wow! She was so toned and beautiful!!
Click to expand...

I think that was Roo who said she actually has some health problems and her medication causes gaining weight. ( hormonal issues I think ).

nataliam1976 said:
I think that was Roo who said she actually has some health problems and her medication causes gaining weight. ( hormonal issues I think ).
Click to expand...

Oh really? Oh ok then, i retract my comment! :shame:

Juicy said:
Ok, please don't beat me for this but ... well.... she's kinda let herself go a bit?! I'm really pleased that they are still in love and she accepts her new figure - but Wow! She was so toned and beautiful!!
Click to expand...

I was SO about to post this...that since they got married she has let herself go...but I do love the fact that he loves her for who she is, whether skinny or heavier. He appeared to love his 1st wife with the same devotion.

ETA: Just saw the comments about the medicine.
S

I think its great if she feels good about herself but maybe a one-piece would have been better. She's been photographed quite a bit lately in some fairly small bikinis (the picture above is the most covered suit I've seen her in) and they aren't very flattering.

I have been in love with Pierce since his days as Remington Steele. LOVE LOVE LOVE! Keeley needs to let me know when she's done with him.

You know I had never been a huge Brosnan fan - till his wife passed away and he clearly cared for her very much - it was touching. And having seen him with his 2nd wife in past couple of years as she gained weight due to health reason, I love this guy even more! Clearly someone can look past physical issues and is quite supportive of their spouse, which is hard to find IRL let alone in the Hollywood/movie circles that we always hear and see. Good for both of them!!