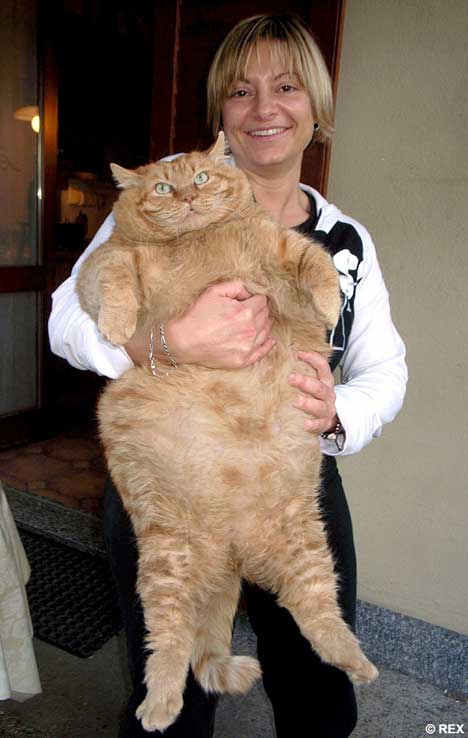 Heavyweight: Orazi's girth is almost as wide as Laura Santarelli's, his owner 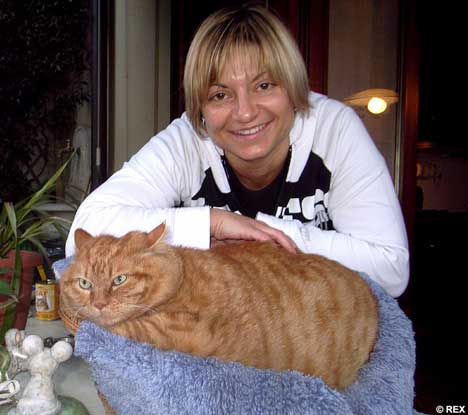 Contented cat: Vets aren't sure if Orazi's obesity is caused by overfeeding or a medical condition

He is the cat that got the cream - and the cake and the biscuits too.


Orazi the ginger tom weighs in at a whopping 35.2lb (16kg), the same as a two-year-old child. At 28lb heavier than the average moggie, he would struggle to get his front paws through a standard cat flap, let alone his broad fluffy rump.


It is not clear whether Orazi has a medical problem, or is being overfed with the wrong sorts of foods. He is pictured here with with his owner, Laura Santarelli, with whom he lives in Eupilio, Italy.


Held up in her arms, the green-eyed colossus reaches from her shoulder to her thighs - and his bulging belly dwarfs hers. Despite all this, however, Orazi is not a record breaker.
In 2004, Sam, a British cat, tipped the scales at 36lb (16.3kg). He had been fed crisps, cakes and sweets by his elderly owner, and had no exercise.
Guinness World Records has stopped listing fat pets because of concerns that some owners were force-feeding them. But the fattest cat on record came from Minnesota in the United States and weighed 41lb (18.5kg) - which makes Orazi look a mere kitten 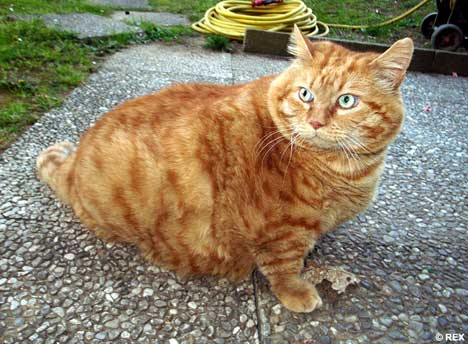 Big boy: He can't even get his head through the cat-flap, let alone the rest of his body
S

I wonder what they are feeding him!!

That poor cat. I have an overweight cat that I rescued from the shelter that I'm trying to get some weight off of. Cooper, that his name, breathes hard and snores, also sometimes you can tell that it hurts him to pick him up, and he is about 20 pounds. I can't imagine how that poor animal feels. I hope she can help him.

OMG...poor baby cat...surely this must be hard on the cat's joints. Brings a tear to my eye that this is something to be proud of.

I don't know what she's smiling about, her cat is very unhealthy and will probably not live nearly as long as he should. Poor baby. I'm glad they stopped putting that info in the Guiness Book.

No wonder that cat looks p!ssed off, he must be so uncomfortable. The owner's smiling 'cos her picture is in the paper... got her 15 minutes.

I dont know but if this cat chases me, i'll probably run!

Prada's Meadow said:
It is not clear whether Orazi has a medical problem, or is being overfed with the wrong sorts of foods.
Click to expand...

Maybe she needs to find out. If it's a medical condition, it needs a vet's attention. If it's overfeeding, I wish someone compassionate would rescue the poor kitty.

OMG! He's so huge. He really needs some diet food and a vet asap! Poor baby.

Love me, love my cat

He was obviously a big boy to start with though. We had a cat who weighed 17lbs and there wasn't an ounce of fat on him, he was just big boned ... looking down on him from above, you could see his sides fell down straight. When we'd take him to the vet people would peer into in his carry basket and ask questions like, "what do you have in there, a rottweiler?" No, just a very large cat! Probably Orazi should be around that weight too.